2013 NFL draft: On the field for Keenan Allen's workout

Scouts from around the NFL met in Greensboro, NC to see Keenan Allen from Cal work out prior to the NFL Draft.

Share All sharing options for: 2013 NFL draft: On the field for Keenan Allen's workout

Greensboro, NC -- Sporting neon yellow cleats, Keenan Allen stretched on field quietly. Allen was at Ricky Proehl's facility on Tuesday morning to work out for NFL scouts and others. Far removed from the combine, scouts compared notes and talked casually with Mike Mayock of the NFL Network, who was there to cover the action. It was both an opportunity to see Allen show off his skills and to watch how the league operates on a day-to-day basis. 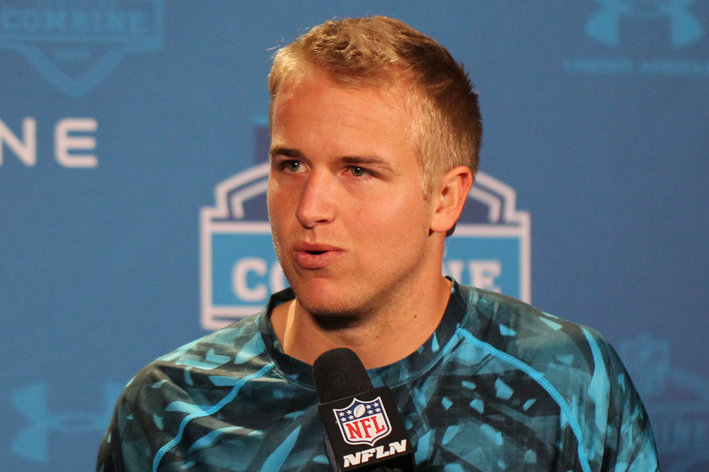 NFL teams are busy this month making some last-minute appointments with potential picks in the 2013 NFL Draft.

For all the seriousness of the pre-draft process, teams are far more relaxed than fans are. Chatting about their families, when it will finally be spring in Minnesota -- these guys know each other, and the process is devoid from the subterfuge and back-alley dealing that tend to lead to phrases like "smokescreen" billowing through reports. Embarrassingly over-dressed, I stood on the field in khakis and a dress shirt, while most were wearing shorts and running shoes. Luckily I was bailed out by the Denver Broncos, whose rep was similarly dressed -- except he was wearing a team polo shirt.

Initially the Minnesota Vikings and Indianapolis Colts looked to be the best-represented teams -- sending a cadre of scouts and position coaches to watch the workout. They were soon trumped by the Carolina Panthers, who had receiver coach Proehl in attendance (obviously), but also two additional coaches, and head coach Ron Rivera. Chomping on a bagel, the Panthers' coach locked on to Allen and spent most of the time chatting with the receiver. He later chatted with Mike Mayock for roughly 30 minutes, rather than sitting with the scouts.

Given the level of scrutiny over tenths of a second, and fractions of an inch, the pro day was an imprecise science. Scouts crowdsourced their 40 times, hoping to get an accurate measurement. Meanwhile a representative from the Jacksonville Jaguars offered to measure the 10- and 20-yard splits, sharing them with the others.

There was no excitement surrounding the 40 times. No swelling music (unless you count '80s hits on the facility stereo) and when it was done the scouts offered little in tells -- no disappointment, no emotion. They marked down their notes with pencil on paper, with the exception of the Washington Redskins' representative. He used an iPad, clearly flashing those Daniel Snyder dollars.

Times on the 40-yard dash varied. My hand-timing was far faster than the crowd, but I was jockeying for a position and didn't get a great look at his start. The consensus seems to be he ran between the mid-4.6s and early 4.7s, but the trainers were quick to mention before the workout that while Keenan Allen's knee is at 100%, the surrounding muscle groups are at about 75% right now -- which could have greatly impacted his time. One scout offered an interesting perspective: "He looks like he's got some hitch in his giddy-up", which I really hope appears in an official scouting report.

Up to this point the workout was clinical, and expected. It was the route running where you really got a sense of team's motivations and interests. The Colts wanted to see his change of direction, while the Bengals were most intrigued at seeing an 'Omaha return' route -- a six-yard pattern that saw Allen run to the sideline, loop back inside, and catch on the run. It was met with a simple phrase from Cincinnati: "He did an awesome job".

Allen made the best of a bad situation with his quarterback -- in this case Ricky Proehl himself. Scouts ribbed the former wide receiver for his errant throws, but like a preseason quarterback he settled -- and soon they were kidding about him making a comeback as a backup.

As slowly as the workout began, it ended abruptly. Allen stood on the field talking to teams, and arranging his schedule prior to the draft. It's not his intention to be in New York for the draft, instead electing to stay in Raleigh, NC. The post-workout feeling seems to be that while he struggled in the 40-yard dash, he excelled in his route running -- enough that several teams want to conduct private meetings with him.

Draftniks will be upset with the measurables in today's workout, but teams seemed less worried. Perhaps they were placating the young receiver, but he was met with a bevy of "great workouts" and "you looked great out there" from teams. A lock as a top-15 pick during the college season, now his status is a little foggier. It remains to be seen where Allen goes in the draft following today's workout.

• Will more than one QB go in the first round?