The Blueprint: Geno Smith's plan for the NFL

Can the Jets' rookie quarterback adjust to the NFL on and off the field?

Share All sharing options for: The Blueprint: Geno Smith's plan for the NFL

LOS ANGELES - Geno Smith never met Tim Tebow before the New York Jets released the game's most controversial, non-traditional quarterback. But he did meet another national celebrity as part of his introduction to the NFL, spending some time with Jay-Z.

Smith was nonchalant about the encounter when asked about it on Thursday afternoon at the Rookie Premiere in Los Angeles.

"Obviously he's seen as a pop icon, but I'm not starstruck in those instances," Smith revealed. "We spent some time talking, and that was about it. It's just about learning. I picked his brain. He's a good guy." 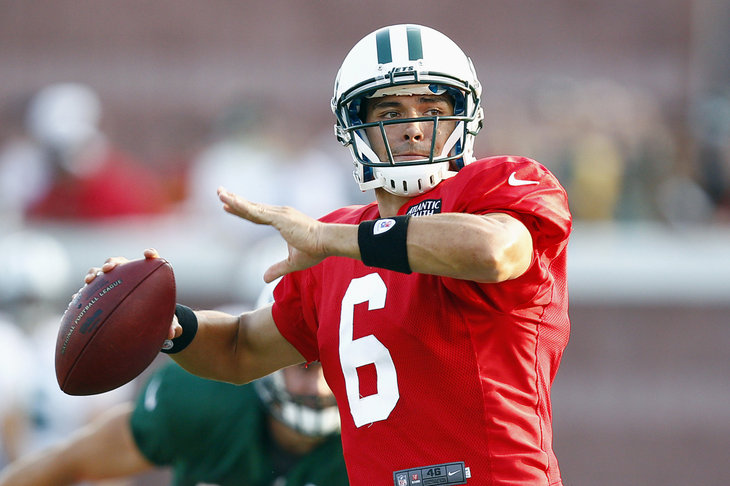 At the moment, Smith is without representation. He fired his previous agents, with Select Sports, after a surprising fall in the 2013 NFL Draft. Most had Smith pegged to be the first quarterback off the board, a sure fire first-round pick. He left Radio City Music Hall that Thursday night without an NFL home and every television camera in the building trying to capture every reaction that crossed his face.

Smith has been linked by the rumor mill to Jay-Z's entertainment agency, Roc Nation, to represent his career going forward.

For now, finding a new agent is not his top priority.

"There's no rush to make a decision," Smith said. "I've interviewed some guys. I've got a lot of time. Right now, my main focus is everything I do inside that facility."

The Jets have a new offensive coordinator this season, former Eagles OC Marty Mornhinweg. He is the third man to call plays for the Jets offense in three years. Last season under Tony Sparano's direction, New York could only muster 17.6 points per game.

Mornhinweg replaces Sparano's confused approach with a familiar West Coast Offense. For quarterbacks, the playbook calls for a heaping helping of three- and five-step drops in sync with receivers on slants, crossing patterns and a bouquet of other short passes.

"I'm going from being primarily in the shotgun to being under center," Smith explained. "There will be some shotgun plays in the offense. It's about knowing the depth of your drops, tying it into your reads."

Air Raid quarterbacks haven't had the best track record making the jump the NFL over the years. Smith's broader range of abilities - he can run a little - give him a good chance to succeed. Also working in his favor is an NFL that finally seems to be embracing the heady offensive concepts from colleges. Mornhinweg brings an impressive track record of his own, however. The Eagles had a top-10 offense in five of his seven years as the coordinator there.

"I'm learning as a I go along. I've been given a lot of reps in practice, and I'm just trying to take advantage of it all. It's been a transition. You've just got to work at it."

A voice from behind a television camera on Thursday asked Smith if he had rewarded himself in the wake of the draft. A watch? A new car? His answer lacked the hoped-for banality.

He'll need to know the ins and outs of the playbook to give himself an edge in the battle with incumbent quarterback Mark Sanchez for the starting job. He was prosaic when asked about the starting job.

"I think the best man wins," Smith said with a practiced tone, as if he'd answered that question a few hundred times already. "It's about putting the best product on the field."

The New York sports pages have so far provided all the hype fans have come to expect. ESPN has transitioned nicely from its allotted Tebow time to updating the world on the Smith vs. Sanchez. It's easy to tell which Jets' practices the media is allowed to attend based on the breathless play-by-play on Twitter. It is exactly what you would expect.

"I understand the New York media market is pretty big," Smith said. "I was one of the bigger names in the draft, and the things that transpired during the draft kind of made it bigger. I'm not surprised by it, and it doesn't phase me one bit."

Ultimately, Smith's success may come down to his ability to ignore the frenzy. His talking point delivery and confession that he doesn't read the reports from practice signals that he's off to a good start, even without an agent.

• QB situations for all 32 teams

• Denard Robinson lines up at QB?

• The rise of "Generation Jaguar"