Twists and slants: How to generate pressure with only 4 rushers

In his debut column for SB Nation, Ben Muth breaks down the finer points of using line stunts to pressure quarterbacks.

Share All sharing options for: Twists and slants: How to generate pressure with only 4 rushers

In the past 15 years, the best way to get stops in the NFL is to have a pass rush that can generate pressure with just four rushers. The Bucs of the early 2000’s, the Panthers of the mid-2000’s, and the two Super Bowl winning Giants teams all stand out as teams that thrived in making quarterbacks uncomfortable with a minimum number of rushers. But just because you aren’t blitzing doesn’t mean you can’t get creative with how you rush. You can run line stunts, which consist of slants and twists.

This column is going to look at two different line twists and how they’re designed to generate pressure on the quarterback. We’ll be looking at tape from a couple of 49ers games since they just happen to run these types of line games better than anyone else in the NFL right now.

First, let’s go back to their Week 8 Monday night trouncing of the Arizona Cardinals.

A couple of key details to set up this play. This is from the fourth quarter, when the 49ers already had a comfortable lead. As a result, the Cardinals are in a two-minute/hurry-up offense. That usually limits the types of protection schemes you are going to see from an offense. You are probably going to get some kind of straight man blocking scheme (where the five o-linemen will be responsible for the four down d-linemen and Mike linebacker) or a half slide protection (which is exactly what it sounds like, half the line slides one way, the other half is in man protection). Both of these protections can be vulnerable against twists, which is why defenses love to run them in two-minute drills. 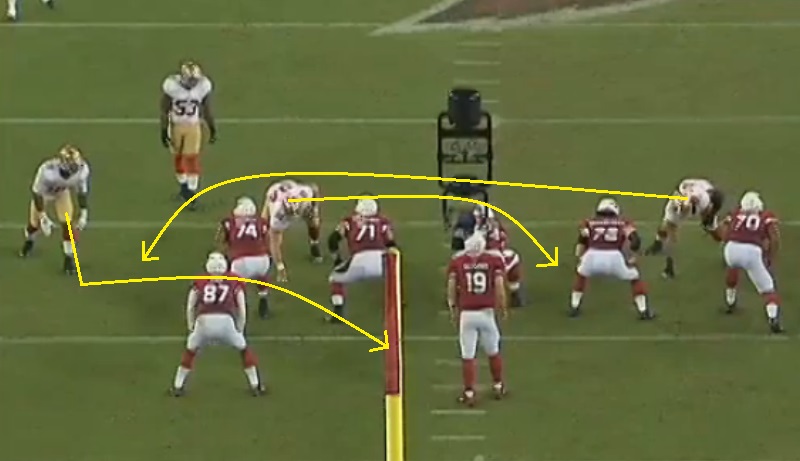 Here, the 49ers are running a three-man game. Most basic blitzes and stunts in the NFL have a hundred different names depending on the team/system at this point, but the best one I’ve heard for this particular stunt is Pirate, so that’s what we’ll call it here.

It’s a simple enough design, the right defensive side crashes and the left DT loops outside for contain. But there’s a certain beauty to just how all the pieces fit together. 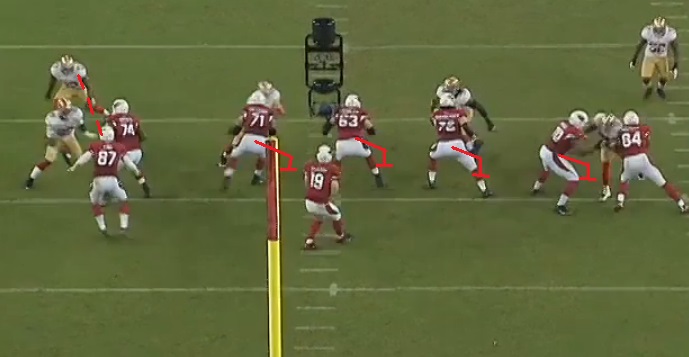 First, the 49ers get the perfect protection to run the stunt. The Cardinals are in a half-slide to their right, meaning that the left side of their o-line is man to man with the Smiths, Justin and Aldon, with zero help from anyone from the center over. Jeff King is responsible for Navarro Bowman, lined up straight ahead of him, and a nickel back that’s just off screen. If both those defenders come John Skelton should throw hot. (I say should and not would, because I’ve seen John Skelton play quarterback before).

The 49ers getting this protection isn’t just blind luck. Like I said previously, most teams only run about two protections in hurry-up situations. I’m no math major, but I think that means you have a 50/50 shot of getting the protection you want.

On top of that, if you are hoping that the offense is going to run this type of combo protection, you can typically assume that the man side is going to be the side the running back (used loosely here’s because it’s Jeff King) is aligned to. Coaches rarely have the back cross the quarterbacks face in protection, so if it is a half slide protection, there’s an 80 percent chance the man side is to the offense’s left. The 49ers probably call this stunt and audible to run toward whatever side the back lines up to. 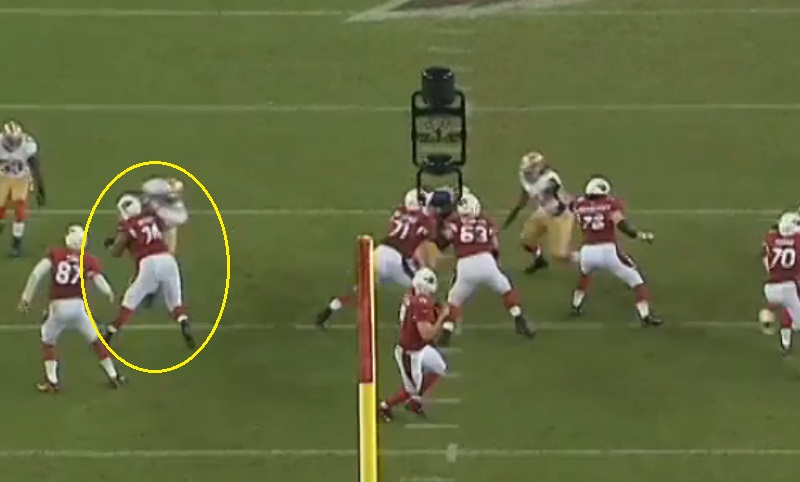 King sees that both his men are dropping and looks towards Aldon Smith to throw a chip. But Smith has already started to make his move inside. After a couple of steps up the field to set up D’Anthony Batiste before unleashing a quick swim move inside.

The timing of the 49ers is beautiful here. Justin Smith crashes inside immediately while Aldon Smith waits for Smith to clear out the guard. The result is an ocean of empty space for Aldon Smith to work in when he does come inside. Batiste doesn’t have much chance to block Aldon Smith in the best of circumstances, but when Smith has about 5 yards of room to work, it’s laughable.

This is the result of a perfect call meeting perfect execution. Aldon Smith has a clear path to the John Skelton, and the 49ers also have a DT looping outside for contain just in case Skelton escapes and tries to roll out of the pocket.

San Francisco isn’t running this stunt to get an unblocked rusher. The only guy that might go unblocked is the looping DT, and it takes so long for him to get there he isn’t a real sack threat. They’re running it to get the matchup they want, Aldon Smith one on one with a lot of space. It’s hard to get unblocked guys with four man rushes, but you can create favorable matchups.

Of course what the current 49ers are really famous for, or infamous for depending on your allegiances, is a simple TED stunt between the Smith’s. In all twists you need a penetrator and a looper. In the Pirate stunt above both Smiths were penetrators, and the other DT was the looper. A TED stunt is a twist where the DT penetrates, and the DE loops around (tackle+end=TED, Pirate is a way cooler name for a stunt).

It’s a simple stunt that just like Pirate works better against man schemes or the man side of slide protections. The reason all these twists work better against man blocking schemes is that in slide schemes you usually end up with a three-on-two advantage for the offense, so even if one blocker gets picked, the other two can cover for him. In man schemes you’ll generally have even odds.

You’re probably wondering why teams don’t just use full slide protection the whole game. The issue is simple, if you full slide the whole offensive line, you’ll always end up with a running back on the edge rusher off one side. This is bad. Edge rushers are usually defensive ends and outside linebackers, better known as the types of guys that get paid almost solely to put pressure the quarterback. You don’t want to block those guys with your third down back.

Here, the Patriots are running the exact same protection scheme as the Cardinals did earlier. 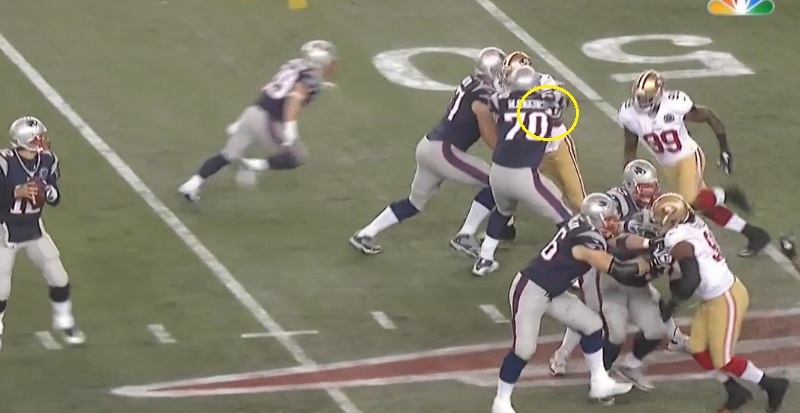 At the snap Justin Smith rushes straight toward left tackle Nate Solder’s inside hip. He can do two things at this point. He can either try to t-bone Solder and knock him outside to open up a rush lane for himself. Or he can try to hump the guard Logan Mankins, move outside with him and open up a lane for Aldon Smith. A hump move is basically just a club move. Reggie White made this move, and its name, famous. He was a preacher, so get your mind out of the gutter.

Justin Smith is really good at both these techniques, and as a result he chooses his strategy based on the guard’s set. If the guard sits inside and waits for the looper, Smith has a three-yard free run to bull rush the tackle and generate pressure himself.

Here, Mankins sets wide to try and blunt Smith’s charge to prevent him from blowing up Solder with a full head of steam. So Smith clubs Mankins with his inside arm and grabs the back of Mankins’ shoulder pad to keep him from coming off on Aldon Smith. This is a deadly combination of technically illegal, rarely called, and incredibly effective. 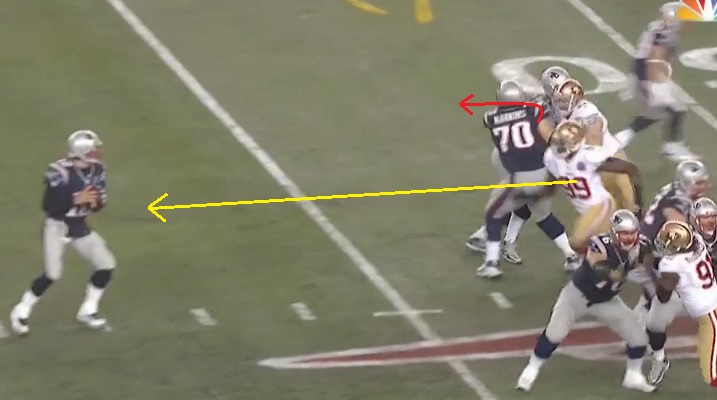 Mankins tries to turn back to get inside, but Smith is just too strong. Eventually Mankins gives up and tries to turn in the direction that Smith is pulling him. (Basically the coked-out Denzel Washington strategy in Flight.) It is a general rule among offensive linemen that you never want to try a 360 during a play. Ever. A 360 generally means trouble. 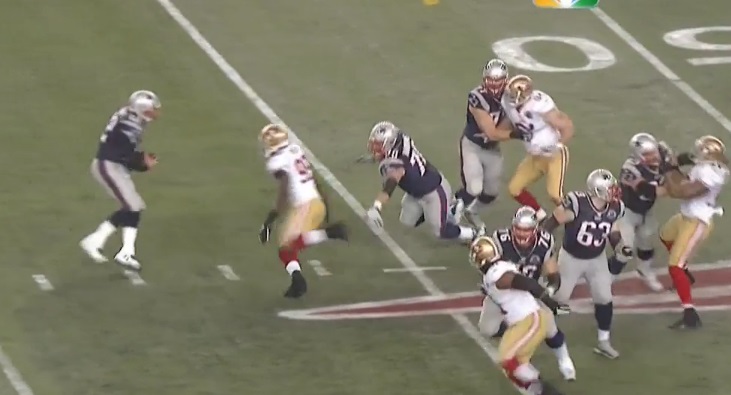 It’s also not good when you’re diving at a free rusher like a punter trying to trip up Devin Hester. That’s not to say Mankins and Solder are bad players. In fact, they’re both good players and are typically very sturdy against twists and stunts. This just shows how good the Smiths, and Justin Smith in particular, are at running these types of games.

• Geno Smith: 'I play smart. I play above my neck'

• The rise of "Generation Jaguar"