One of the best linebackers in a generation has called it a career on Wednesday morning.

Former Chicago Bears linebacker Brian Urlacher has announced his retirement via Twitter from the NFL after playing 13 seasons.

"After spending a lot of time this spring thinking about my NFL future, I have made a decision to retire. Although I could continue playing, I'm not sure I would bring a level of performance or passion that's up to my standards. When considering this, along with the fact that I could retire after a 13 year career wearing only one jersey for such a storied franchise, my decision became pretty clear.

"I want to thank all of the people in my life that helped me along the way. I will miss my teammates, my coaches, and the great Bears fans. I'm proud to say that I gave all of you everything I had every time I took the field. I will miss the game, but I leave it with no regrets."

What Brian Urlacher meant to the Chicago Bears 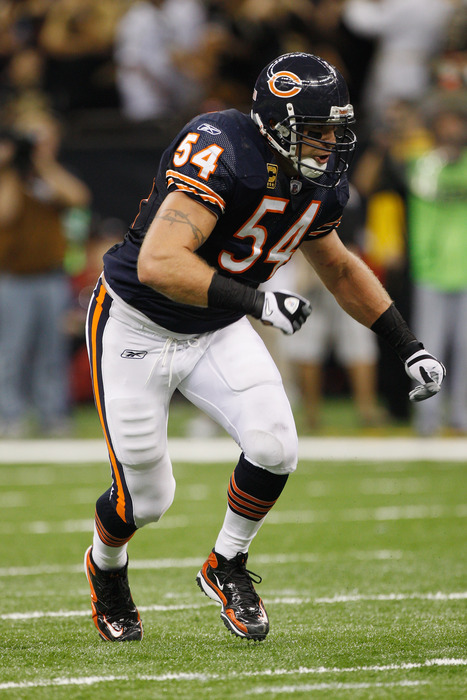 In a day and age when most players compete for multiple teams, Urlacher will forever be remembered in a singular jersey.

Urlacher came into the league as a first-round pick out of the University of New Mexico for Chicago and stayed in the Windy City for the duration of his career. Outside of Ray Lewis, no linebacker in the past decade or so has been more accomplished than Urlacher.

A future Hall-of-Famer, Urlacher has enough accomplishments to last a lifetime: 2000 Defensive Rookie of the Year, 2005 Defensive Player of the Year, eight-time pro bowler and four-time All-Pro.

Additionally, Urlacher is the all-time leading tackler in Bears franchise history, beating out the likes of Dick Butkus and Mike Singletary, two Hall-of-Fame linebackers that also played their entire careers with Chicago.

Nine times, Urlacher finished a campaign with 100+ tackles. In 2002, Urlacher racked up 151 tackles, the most for the former New Mexico standout in a single season.

In his career, Urlacher was one of the premier cover linebackers, rivaling Derrick Brooks of the Tampa Bay Buccaneers. He finished with 22 interceptions including a career-high five picks in 2007.

Urlacher was an all-around force, sacking the quarterback 41.5 times to rank seventh in the pantheon of Bears football. He is only one of four players to theft 20+ interceptions and 40+ sacks in NFL history.

The standout linebacker went to one Super Bowl, ultimately losing to Peyton Manning and the Indianapolis Colts in Super Bowl XLI.

• Jets to decide QB before camp?

• Ben Muth: How to generate pressure with 4 rushers