Tampa Bay Buccaneers cornerback Ronde Barber announced his retirement on Wednesday, so we take a look at what was probably a Hall of Fame career.

Ronde Barber has an impressive body of work across 16 seasons with the Tampa Bay Buccaneers, so it feels a little silly to focus on one particular moment. His 92-yard interception return to seal a victory over the Philadelphia Eagles in the 2002 NFC Championship Game cannot be understated in terms of what it meant to the franchise, however.

Earlier in the game, Barber forced a fumble on a blitz, knocking the ball out of Donovan McNabb's hand just before the quarterback brought his arm forward to throw. With 3:12 to go in the game, Barber feigned pressure before slipping into a zone just in front of Antonio Freeman. McNabb threw the ball right into Barber's waiting arms, and the cornerback ran untouched to the end zone. The Buccaneers won, 27-10, to go to the Super Bowl for the first time ever.

Talk to Bucs fans, and many will agree that the play stands as perhaps the top highlight in franchise history. It stands as perhaps the definitive moment of a championship run for a team led at quarterback by Brad Johnson, of all people. That play would have been enough to embed Barber forever within Buccaneers lore, just as few New York Giants fans will never forget the name David Tyree.

Ronde's Legacy will live on forever 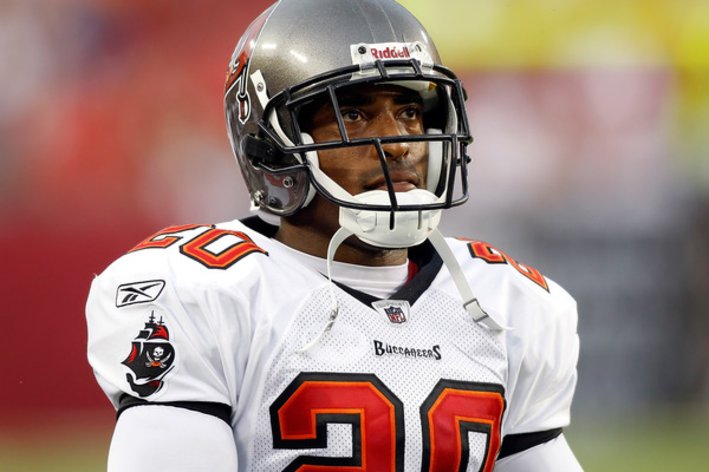 Barber was no one-hit wonder, however. He was damn near the most consistent player in the NFL for going on two decades. At 38 years old when he announced his retirement on Wednesday, Barber hadn't yet experienced a period of steep decline in his career. Some seasons were better than others, but Barber can essentially say he went out on top without too much argument.

In 2012, Barber made the switch to free safety and was among the top players in the league at the position. He was given a 9.0 rating by Pro Football Focus, the No. 10 safety in the league behind guys like Eric Weddle, Jairus Byrd and Reshad Jones.

He had four interceptions and four passes defensed to go with his 81 tackles. Watching Barber in 2012, it was pretty obvious that he could probably come back for another season in 2014. Does his body have anything left to give to the NFL? The tape suggests yes, but Barber has nothing left to prove at this point.

Since entering the league in 1997, Barber only played in fewer than 16 games in one season, his rookie year. After being drafted in the third round (his brother Tiki Barber went in the second), he played in just one game. From then on, he played in every game through to last season, showing remarkable endurance.

But more than his endurance was the high level of play. He made nine starts in 1998, and managed two interceptions, two forced fumbles and a whopping 17 passes defensed. Eventually, he made his first Pro Bowl in 2001, also being named a first-team All-Pro. He had 10 interceptions, the most of any cornerback in that season.

The accomplishments just keep coming, too. He played in 240 straight games since 1998, good for the most consecutive starts by any cornerback in league history. He's got the most quarterback sacks by a cornerback in history and led the league in interception returns for touchdowns in 2006.

Barber's career statistics read like a sure-fire Hall of Famer. The guy has 47 interceptions to his career, 13 forced fumbles, 28 quarterback sacks and 12 turnovers returned for touchdowns. Oh, and he's got 1,005 tackles to his name on top of that.

The fact that it takes that many paragraphs to properly list out the accolades to his name speaks for itself. Barber is the only player in league history with 40 or more interceptions and 20 or more sacks. He's behind only Deion Sanders, Devin Hester and Rod Woodson on the non-offensive touchdown list.

Barber is one of the greatest players in Buccaneers history, and certainly one of the best cornerbacks of all time. There are players who radiate the aura of being a shoe-in for the Hall of Fame, and Barber is certainly one of those players. If he's not on the first ballot come five years from now, it would be surprising.