Belichick discussed adding Tim Tebow to the Patriots roster but didn't say much at all, Manti Te'o finally broke his media silence and discussed his time in San Diego, and more NFL news.

Bill Belichick never breaks character. Loads of TV news trucks and other reporters made their way to New England to ask Belichick about Tim Tebow. If you know Belichick at all, you knew those reporters were not going to have any luck getting anything useful out of him. "Belichick's responses to today's questions were so vintage Belichick that you wouldn't even have any idea what year this video was shot if it wasn't for his stylish new 2013 team issue windbreaker, which is clearly the summer version of The Hoodie," Pats Pulpit writes. Read the transcript here.

But what does RGIII think about Tebow? Hogs Haven takes a pass on Tebow coverage. 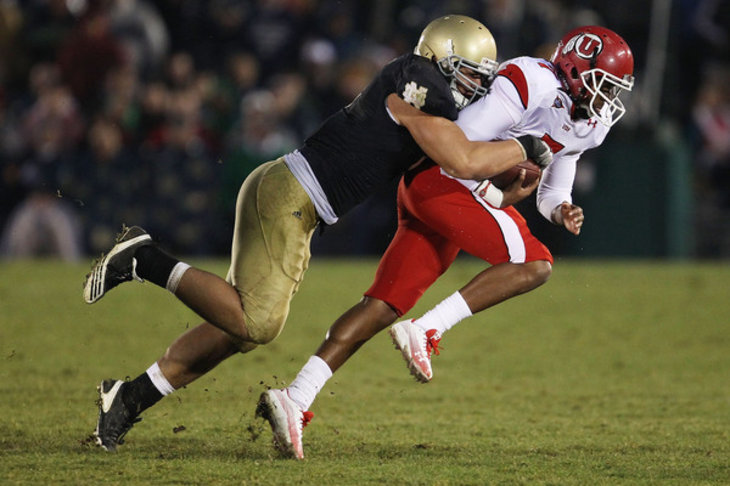 Manti Te'o finally spoke up on the first day of Chargers minicamp, after a long offseason of bad news.

Ahmad Bradshaw is the latest free agent to join Indy. Stampede Blue wonders if this is a departure from those who believe you should build through the draft: "Bradshaw is the thirteenth veteran free agent signing made by the Colts this offseason. That has to be some sort of team record, because I have never seen the Colts spend this much on free agents in one offseason."

Hakeem Nicks returns to New York. Or at least shows up to OTAs. Big Blue View spent the day at the Giants facility -- read up on the sights and sounds from Giants OTAs here.

Desmond Bishop on his way out in Green Bay. A surprising move in June. Acme Packing Company takes a look at the reason -- it's always about the money -- and what it means for Green Bay's linebackers.

12,000 fans attend Cardinals fan fest. Revenge of the Birds gets up close and personal with the 2013 Cardinals, with lots of pictures.

Todd Haley and Ben Roethlisberger have a bromance. Last year was last year. This year, Haley and Roethlisberger are apparently pals. Behind The Steel Curtain offers up the first joint nickname for the two: "It's an old-fashioned story of Bromance. Todd and Ben, perhaps more masculine circles would refer to their collective togetherness as "Bod."

Kevin Kolb, EJ Manuel are splitting reps. Tarvaris Jackson was released this week, leaving Kolb and Manuel to battle it out. Buffalo Rumblings notes that training camp is when we'll begin to see separation between the two. "We're not even to training camp yet, and the first-round pick is already closing the gap near the top of the depth chart. Manuel has the look of a favorite to start early in his professional career, but a strong summer from Kolb - who is very clearly in play for that starting job - could delay that inevitability."

Mike Glennon surprised to be a Buc. The Tampa Bay rookie spoke with SB Nation and said, "At first I wasn't expecting it, I hadn't had much contact with the Bucs throughout the process, so it came as somewhat of a surprise." Video of the interview can be seen at Bucs Nation.

Marcus Lattimore is running sprints. He's still out for a while but progress is being made, according to Niners Nation.

Takeo Spikes visits the Rams. Turf Show Times writes: "The Rams don't have good depth at linebacker, and if Spikes is willing to accept being a role player and come with a cheap price, why not sign him?"

Future Hall of Fame quarterback and lady boot enthusiast Tom Brady has already gotten off to an early start stepping on the hopes of dreams of Texans fans in 2013.

Jahvid Best not taking part in Lions minicamp. Not surprised. "With him still out from the concussion he suffered during the 2011 season," Pride of Detroit writes, "it seems unlikely that we will ever see Best play again in the NFL. His status has not changed, and just as was the case with the Lions' OTAs, he's not taking part in their mandatory minicamp this week."

Terrelle Pryor calls talk of him not starting 'nonsense'. Pryor claims this it's a competition with Matt Flynn, who most think will end up with the starting job. Silver and Black Pride caught up with Pryor, who said, "It's still a long time before even the first preseason game. So, that talk is nonsense. It doesn't matter right now, as long as we're helping each other, like I said before, and we're getting better and building team chemistry. That's the main thing, working with each other. Right now, not knowing who the starting quarterback is going to be and who's getting talked about, that's the thing that's not very important right now, to me."

Should Seattle sign Tarvaris Jackson? Field Gulls breaks it down while more than half of their readers say they should not sign him.

Chad Greenway will have his knee scoped. Daily Norseman reports: "Head Coach Leslie Frazier said that Greenway was having a little tightness in his knee, and the team thought it best to have the surgery done sooner rather than later. Greenway is expected to be ready for the start of Training Camp on July 25 at Winter Park."

Jaguars work out player who hasn't played in nine years. He's also Jevon Kearse's cousin. Big Cat Country has the details on the basketball player the Jaguars worked out.

The Chargers take to the streets of San Diego to promote their team. The set-up in doing this was impressive. Bolts From The Blue writes: "The Charger Girls joined the players around town, as did Head Coach Mike McCoy and General Manager Tom Telesco. Everyone boarded 7 busses - grouped by positions - and headed to different areas of the county. Where they were headed was kept a secret until they actually arrived. The fact that the team was able to get all the players to agree to this event is a feat in itself, not to mention the logistics involved in coordinating everything."

Browns players staying out too late? Jim Brown was quoted this week: "And some of those players are staying out a little too late at night. I have a little advice for them, as well." Dawgs By Nature readers guess who that could be. 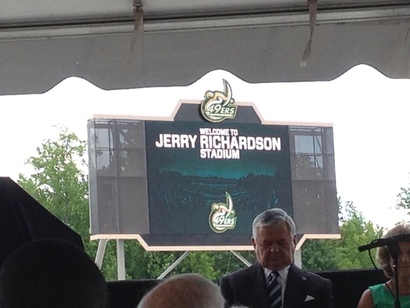