Barry Sanders has the best tweet you'll see today, Rich Gannon disagrees with the notion that Matt Flynn is the worst starter in the NFL and lots more from SB Nation's NFL blogs on Wednesday.

Maurice Jones-Drew avoids battery charges. The video of the incident -- which you can see here -- shows little.

Ron Jaworski recently said the Raiders' Matt Flynn was the worst starting quarterback in the NFL. Rich Gannon disagrees with that. "I think from Jaws' perspective ... first of all, the fact that he has Blaine Gabbert and Jake Locker rated ahead of Matt Flynn I think is ridiculous."

This is the best tweet (via Pride of Detroit):

With Desmond Bishop going from Green Bay to Minnesota, here's a look at former Packers who have played for the Vikings.

Speaking of Bishop, what position will he play in Minnesota?

Denard Robinson is an OW. That's offensive weapon. A little something he must've picked up from Dexter McCluster, who has also tabbed himself OW.

Bill Parcells has been elected to the New Jersey Hall of Fame. Big Blue View reports: "Parcells is included in a 2013 class of inductees that includes pop singer Whitney Houston and President Grover Cleveland."

Justin Smith got a new deal in San Francisco, which has Texans fans wondering if that means Antonio Smith could soon get one, too. Antonio Smith has one more year remaining on his contract. Here's what Battle Red Blog readers think of his future: 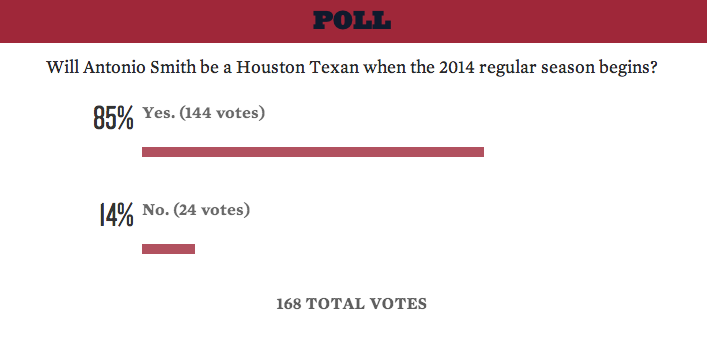 What is the Bengals biggest weakness? Quarterback was the second-highest vote-getter.

Nate Washington sees some Ben Roethlisberger in Jake Locker. Here's the Tennessee reaction to this and the Pittsburgh reaction.

The Cowboys inked Travis Frederick, which means all their picks have been signed.

Brian Urlacher is gone. So who will be the new face of the Chicago Bears?

How long will the Broncos dominate the AFC West? They have the best odds to win the division and the most salary cap space. "John Elway has done a terrific job building a team that is favored to dominate its division in 2013," Mile High Report writes. "With the most cap room of the group, and a series of offseasons that have led to improvements across the team, that domination could extend for years to come."

How big is the Falcons' signing of Steven Jackson? Someone calls it the biggest move of the offseason.

How many rushing yards will Doug Martin have this season? Bucs Nation investigates.

Bill Cowher was in a car crash but he is fine. Behind The Steel Curtain has multiple photos of the wreck.

The Browns hosted part of the NFL Rookie Symposium. Dawgs By Nature shares a few quotes.

The Panthers need to manage expectations this season. Cat Scratch Reader writes: "This coaching staff will work, or it will flame out. The secondary will hold, or let everything though. Linebackers will stay healthy, or they won't. With so many unknowns, and questionable areas it's not the time to make any predictions, it's time to be quiet, and take what the season gives up."

The West Coast Offense is confusing. Listen to Mike Holmgren explain it.