Which defensive players are looking for new contracts next season?

Earlier, we previewed the biggest offensive players entering contract years. Now let's look at the defensive side, which features plenty of up-and-coming talent, some bonafide superstars, and a handful of reliable veterans.

Without further ado, here are the biggest defensive names playing for new contracts.

Greg Hardy, Carolina Panthers -- Hardy had a coming out party last year with 11 sacks, and is now pairing with Star Lotulelei and Kawann Short on what should be a much-improved line. If he continues to produce, he's in line for a big paycheck.

Geno Atkins, Cincinnati Bengals -- Atkins may be the best defensive tackle in the league, and the fact he's set to make just $1.423 million this year is highway robbery. Will Mike Brown finally open up his wallet? 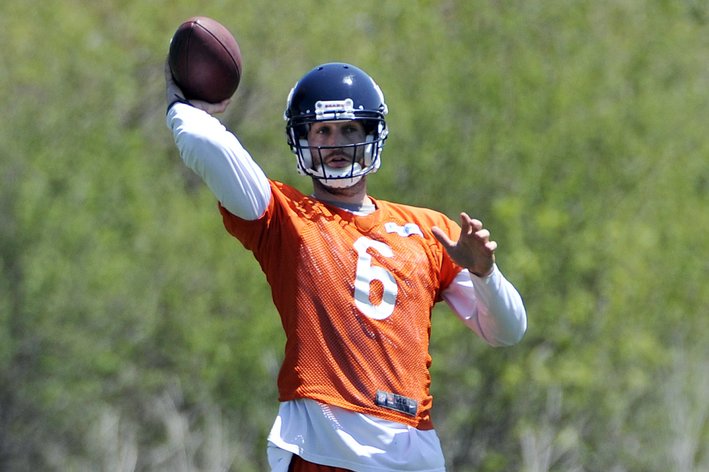 Jay Cutler, Maurice Jones-Drew, Eric Decker highlight what could be a blockbuster class of offensive free agents in 2014. Which ones will make it that far?

B.J. Raji, Green Bay Packers -- Raji rebounded nicely after a down 2011, but he hasn't quite returned to the dominant form he showed in 2010. He technically has two years left on his contract, but 2014 is a voidable year, so it's up to him to produce.

Paul Soliai, Miami Dolphins -- A quality veteran, Soliai has anchored the Dolphins' line for the past four years and hasn't missed a game since 2009.

Jared Allen, Minnesota Vikings -- Still one of the best in the league at age 31, Allen got double-digit sacks for the sixth year in a row. There have been no extension talks yet, and some believe this will be his final year in Minnesota.

Lamarr Houston, Oakland Raiders -- One of the few bright spots on a dismal defense, Houston is also one of the few returning starters. The Raiders will lean heavily on him at the 3 tech spot.

Justin Smith, San Francisco 49ers -- Smith's triceps injury forced him to miss his first games since 2002. A workhorse who played a massive number of snaps the past two seasons, it's worth wondering how much mileage Smith has left in his tires.

Karlos Dansby, Arizona Cardinals -- Despite recording 134 tackles and nine passes defended last year, the 33-year-old had to settle for a one-year deal with Arizona, the team he played for from 2004-09.

Brian Cushing, Houston Texans -- Cushing also missed most of 2012 due to injury, but before that he was a key part of Houston's defense. His Pro Bowl rookie season set some high expectations, but 114 tackles, four sacks and two interceptions in 2011 suggests he's capable of meeting them.

Donald Butler, San Diego Chargers -- With veterans departing the defense, Butler has become one of San Diego's defensive leaders. Only 24 years old, a big season from Butler could do big things for his market value.

Brian Orakpo, Washington Redskins -- Orakpo has had some injury concerns, tearing his shoulder and left pectoral late in 2011 and again early in 2012. Despite that, he has two Pro Bowls on his resume and his pass rush ability is capable of bringing the rest of a defense up a level.

Charles Tillman, Chicago Bears -- Tillman made the Pro Bowl in his ninth and 10th years in the league, suggesting that he still has plenty of tread on the tires. With 33 career interceptions and 39 career forced fumbles, Tillman can contribute big things to a defense.

Sam Shields, Green Bay Packers -- Shields entered the league as an undrafted free agent and has worked his way to a strong situational role with Seattle. Unfortunately for him, his most notable 2012 moment was being shoved to the ground by Golden Tate in the Seahawks/Packers simultaneous catch fiasco that led to the return of the regular referees.

Aqib Talib, New England Patriots -- Injuries kept Talib from reaching his full potential in Tampa Bay, and a banned substances suspension saw him get traded to New England, where he's been a solid if unspectacular contributor.

Brandon Browner, Seattle Seahawks -- After failing to make his way into the NFL following college, Browner became a three-time CFL All-Star before returning stateside for a starting role with the Seahawks.

Eric Wright, Tampa Bay Buccaneers -- Wright was nearly released by the Buccaneers after a four-game banned substance suspension, and signed a one-year deal at a significant pay cut, but a strong year in a revamped Tampa Bay defense could see him assert his value .

DeAngelo Hall, Washington Redskins -- Hall has bounced around the league due to inconsistent play and took a pay cut to stay with the Redskins in 2013, but he remains a durable veteran with raw skills.

Jairus Byrd, Buffalo Bills -- Byrd tied the league for interceptions as a rookie, one of his two Pro Bowl years. The other came in 2012, suggesting he has the capability of making long-term contributions to a team.

Major Wright, Chicago Bears -- A third-round pick in 2010, Wright advanced to a starting role for Chicago in 2012. He had 71 tackles last year, with four interceptions and eight passes defended.

Donte Whitner, San Francisco 49ers -- Whitner is a hard hitter who's better in the box than in coverage. He may find himself the odd man out if rookie Eric Reid can contribute in San Francisco. Should that happen, the 2012 Pro Bowler shouldn't have much trouble finding a team with a spot for him.