Will change finally catch up to the New England Patriots?

Share All sharing options for: Will change finally catch up to the New England Patriots?

The 29th pick of the 2013 NFL Draft belonged to the New England Patriots. And the NFL, as it often does, had worked up quite a ceremony to mark it. Former Patriot and Boston marathon bombing hero Joe Andruzzi popped up on stage with Roger Goodell. They held up a Patriots jersey emblazoned with "Boston Strong" to present to the draft pick. "Sweet Caroline" played in the background.

A wave of tweets rippled through the coverage predicting that the Patriots would trade the pick.

Give Andruzzi points. He made a poignant speech about a city standing tall in the face of tragedy. And then he segued perfectly into an announcement that the Patriots had traded the 29th pick to the Minnesota Vikings.

Nobody was surprised, or should be. Bill Belichick and the Patriots do not ever let ceremony interfere with the business of football.

Bill Belichick has been in the NFL nearly 40 years. He's had books written about him and his team. This will be his 14th season coaching the Patriots, but this is still a man walled off from the public. The Belichick that the world does see is cold. He is awkward. The man is not outwardly sentimental, or at best is blissfully unattached like some grouchy football monk in a hoodie.

That business-first approach was on display last week when the team released Aaron Hernandez immediately following his arrest, and before he was arraigned on first-degree murder charges. In the mind of the Patriots' brass, he can be replaced as easily as he was scooped up as a value pick in the fourth round of the 2010 NFL Draft. No one, not even someone with the talent and potential of Hernandez, is worth that much trouble to the Patriots.

Fans got an even bigger reminder in March when the Patriots and Wes Welker had an acrimonious split. He turned down the team's low-ball offer and left for Denver. He spent six seasons in New England, five as the team's top receiver, and even he was ultimately expendable. The Patriots replaced Welker with Danny Amendola, a younger carbon copy of the team's stalwart receiver. 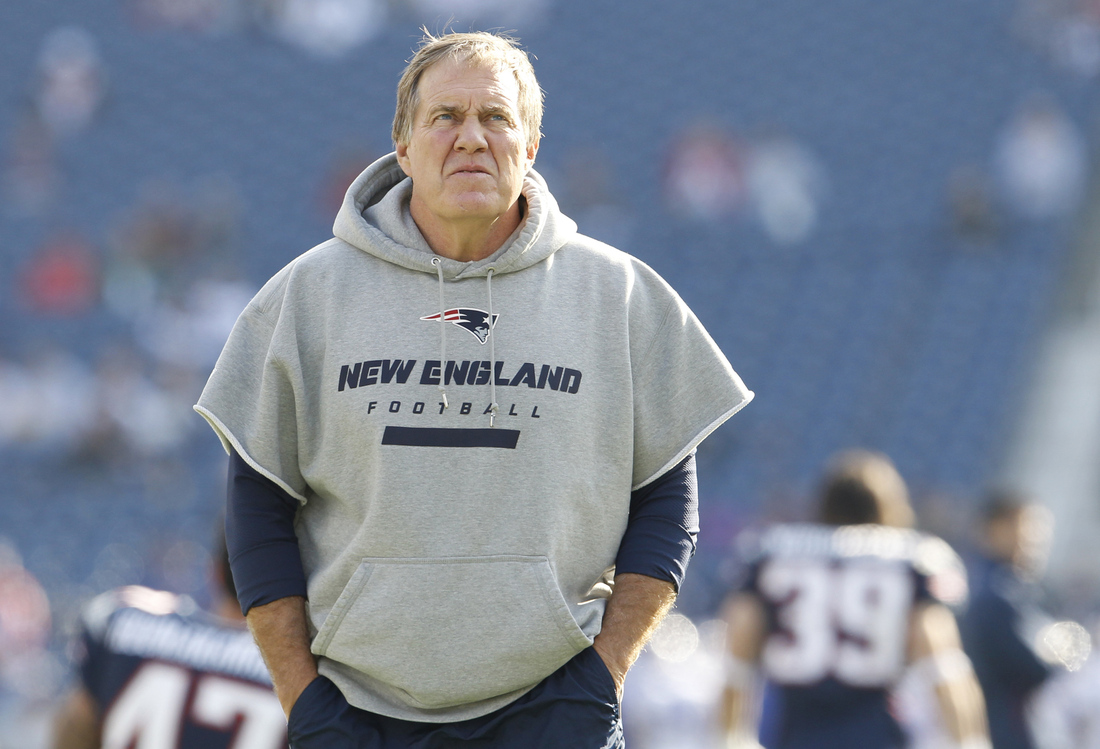 Belichick and the Patriots constantly remind us that football is also a business, and sometimes a very cold one. It's a notion that runs counter to the league's way of marketing personalities. And at times, it makes it easy not to like the stoic man in the DIY sleeveless sweatshirt.

The Patriot dynasty has been going on long enough now that there are current fans who missed its beginnings. Tom Brady took over from Drew Bledsoe in 2001, Belichick's second year at the helm. New England upset the St. Louis Rams for the first of three Super Bowl wins.

Since then, New England has had 12 consecutive winning seasons, five Super Bowl appearances and missed the playoffs only twice. The Patriots finished with double-digit win totals in each of the last 10 seasons, an unprecedented level of success putting Belichick in a position where he not only has few working peers in his profession, but few living who have accomplished what he has.

Belichick is the only constant. The team, however, has changed over the years. The 2001 team earned the Lombardi Trophy with a bruising defense that stopped the Rams by beating the hell out of Marshall Faulk. In 2004, the Patriots leaned on free agent pickup Corey Dillon. He ran the ball 345 times for 1,635 yards of offense. New England won the Super Bowl that year.

The 2006 Patriots won 12 games and almost beat the Colts in the AFC Championship game with a stable of bit-part receivers like Reche Caldwell, Doug Gabriel, and a 35-year-old Troy Brown.

Randy Moss and Welker joined the team a year later. Along with Brady, the three became the nexus of the most prolific offense in NFL history. They finished the season 16-0, but ended the year 18-1 after being upset by the New York Giants in the only game that really mattered.

Besides the coach and the quarterback, the only other thing that stayed the same was the shifting personnel. Sometimes, that meant saying goodbye to icons or knowing when to cut bait on distractions. From superstars to spare parts, the Patriots found a fit or they moved on from a player. Remember, this is a team that once fooled its own former personnel executive by making Matt Cassel look like a viable starter. 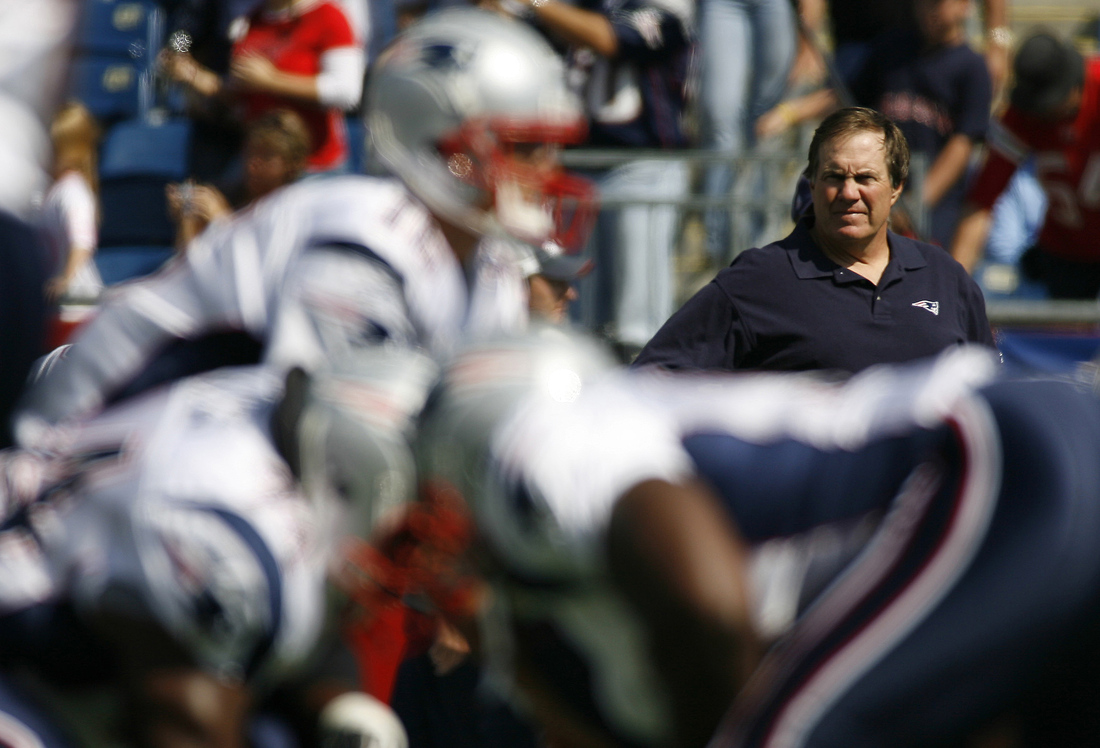 So what will the Patriots' offense look like this year? Will be it one leaning on a stable of talented runners like Shane Vereen and Stevan Ridley? Can Amendola, a healthy Gronk and a stable of anonymous tight ends pick up where they left off?

New England's offense last season had a knack for looking different from week to week with Hernandez and Gronkowski both injured and unavailable at different times. Players representing 77 percent of Brady's total receiving targets from last season are gone now, and a new crop of "next men up" are there to take their place. None of us will be surprised when a player like Aaron Dobson, a second-round pick out of Marshall this year, fills part of that void.

(Mike Clay at Pro Football Focus has a thorough, insightful breakdown of how the Patriots' offense might look this season. You should read it).

Columnists, reporters and anyone else with a soapbox to stand on have been wrestling with the Patriot Way and what it means for two weeks. It's just an expression. Like "spread offense" or "rise and grind," a placeholder for talking about a concept that means something different to everyone. Whatever the offense ends up looking like, the Patriots are still a safe bet to win the AFC East and in the conversation for the sixth Super Bowl appearance in 13 seasons.

Belichick's demeanor and disdain for the camera highlight the sometimes-irreconcilable differences of being in both the entertainment and football business. He is both successful and impossible to love. His approach also allows him to manage change and find success in a place where most careers are fleeting. The Patriots remain the perfect heel for today's NFL: calculated, cold, and consistently successful.

Welker's departure, Gronk's injuries and Hernandez's troubling story give New England more than its usual share of disruption to the process. It is a reminder that eventually change catches up to everyone. A remarkable sequence of events could reveal the endpoint of one of the most remarkable periods any NFL team has experienced. Belichick, Brady, the Patriot dynasty ... all of it will eventually wind to an end.

However, until we see the definitive signs of decline on the field, there is no reason to bet against Belichick and the Patriots this season.

• No, Ryan Mathews was not arrested

• Is this the NFL's play of the year?

• The complete timeline of the Hernandez case

• Which teams have the most frequent legal troubles?