Matthew Stafford received a multi-year extension this week, but it's not the only blockbuster deal that could get done this summer. The Falcons' Matt Ryan is up next. Read on for more news from SB Nation's NFL blogs on Thursday.

Will the Ryan Clady deal get done? Mile High Report breaks down where things stand now -- Clady reportedly has been offered a contract which includes over $30 million in guaranteed dollars.

Attn sports media: Please read this guide on how to properly speculate on the Rams and relocation.

Jacksonville Jaguars owner Shahid Khan is reportedly in talks to buy English Premier League club Fulham FC. As Big Cat Country points out, he wouldn't be the first NFL owner to be involved in soccer.

Do Lions fans approve of the Matthew Stafford extension? Yes, they do.

Speaking of Stafford's extension, The Falcoholic notes that Matt Ryan is going to be a very, very rich man soon.

@NFLosophy has become an entertaining Twitter follow, and he had been anonymous until last night when he revealed himself as a former employee of the Bucs. The full story behind @NFLosophy's reveal can be seen at Bucs Nation.

Raiders linebacker Kaluka Maiava has been arrested in connection with an incident in a Maui bar earlier this year. Silver and Black Pride has the details, including this note: Desmond Bryant left Oakland to sign in Cleveland while Maiava left Cleveland to sign in Oakland. Both players were arrested within days of their signings.

The Bengals are taking the right 'wait and see' approach with franchise tagged Michael Johnson, according to Josh Kirkendall, who points out an interesting trend last year with franchise players and their contract offers the following season.

How many 'of the year' awards can 49ers players win this year?

An imaginary conversation with Jerry Jones.

Vonta Leach returning to Baltimore isn't out of the question. The Ravens reportedly have an offer on the table. Miami appears to be the favorite though.

Who will be this year's surprise playoff team? Votes for the Dolphins and Chiefs in there.

Mark Sanchez says the right things. "I'm going to win," the Jets QB was quoted as saying. Gang Green Nation responds: "The problem is you can say and do all the right things off the field, but nothing is truly important except that which happens on the field."

Dolphins' Paul Soliai lets his money do the talking. He wrote a $250,000 check to the University of Utah (where he went to school) for their football program.

It wasn't long ago the Cowboys had one of the oldest offensive lines in the league. Today, they have one of the youngest, according to Blogging The Boys.

Which Jets player do Bills fans hate the most? Buffalo Rumblings has your poll results. 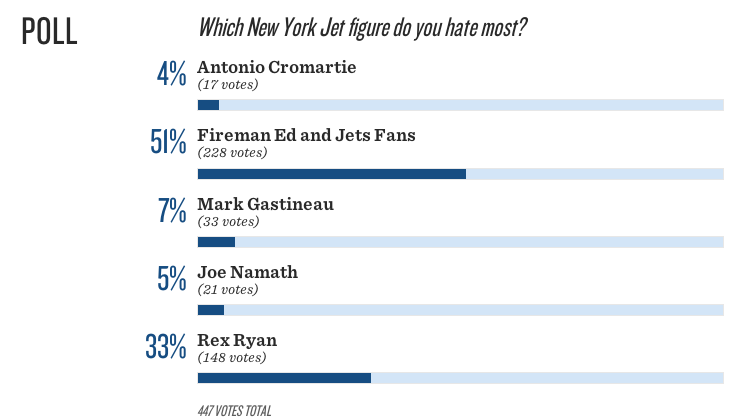 Should the Chargers switch to the 4-3 defense? Bolts From The Blue cites the young talent at inside linebacker as a reason the Chargers should consider it.

Remembering the Panthers worst game of the 2012 season.

What was the Colts biggest addition this offseason? Stampede Blue: "Drafting [Bjoern] Werner filled THE BIGGEST NEED this team had this offseason, and Chuck Pagano pretty much said that at his post-draft press conference. Teams don't win unless they can do two things: Make plays in the passing game, and pressuring the quarterback."

Bruce Irvin is moving to linebacker and Field Gulls tells you all you need to know about it.

The Titans have put an emphasis on improving their receivers over the last few years. Music City Miracles wants to make sure you don't forget Kendall Wright.