Remember those tweets Aaron Rodgers made 18 months ago? Well, the moral compass of America does, and they would like to remind him about it.

Thank heavens for PEDs. With politicians off kissing babies at county fairs in their home districts right now, we wouldn't have anything to feed our national need for moral outrage. In the NFL world, the hot takes machine raced to remind Aaron Rodgers about his defense of Ryan Braun LAST FEBRUARY and a "bet" he made on Twitter.

Braun's PED suspension in 2011 was overturned on appeal. Rodgers defended his friend from an accusatory media climate and the usual collection of idiots with an unlimited amount of 140-character rants at their disposal.

Here's what Rodgers said in February 2012: 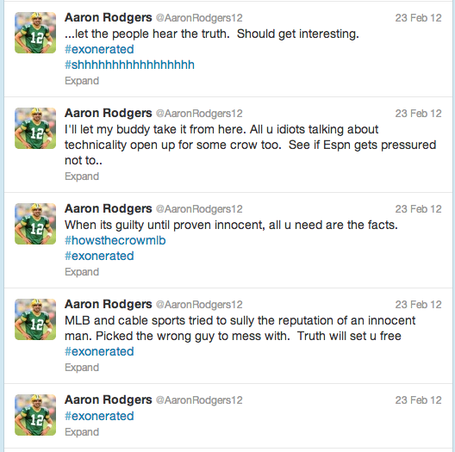 Defending a friend, an exonerated friend, from broadside of columnizing? HOW DARE HE. Ride the wave of hot takes, dude. And he even had the audacity to lay down a year's salary on the matter.

@toddsutton ya I'd put my salary next year on it. #ponyup #exonerated

As you would expect, the world was all too happy to remind Rodgers about that bet after Monday's news that Braun had accepted a 65-game suspension shelving him for the rest of baseball season.

Rodgers hasn't said any more about it since then, not publicly. But guess what he'll be asked about over and over and over again when the Packers start training camp this week?

And what exactly should Rodgers do in the wake of this national scandal threatening to undermine the moral fabric of our otherwise flawless society?

Peter King's pet troll at PFT has an idea.

Braun took advantage of his friendship with Rodgers, and Rodgers ended up looking bad for it. He has every right to end the friendship, and to call Braun out.

Sigh. Let's just start playing football games so we can get back to being pissed off about players missing time for silly things like the birth of a child.

• The best & worst divisions of the last decade

• Myths of the Eric Wright trade