We take a look at some of the most interesting training camp position battles around the AFC.

Rookies and veterans alike are reporting for training camps around the NFL. The headlines are about to be flooded with talk of position battles. All around the league, starting and backup jobs are up for grabs, and every dropped ball, bad pass or botched assignment will be scrutinized heavily by the coaches ... and by the media. 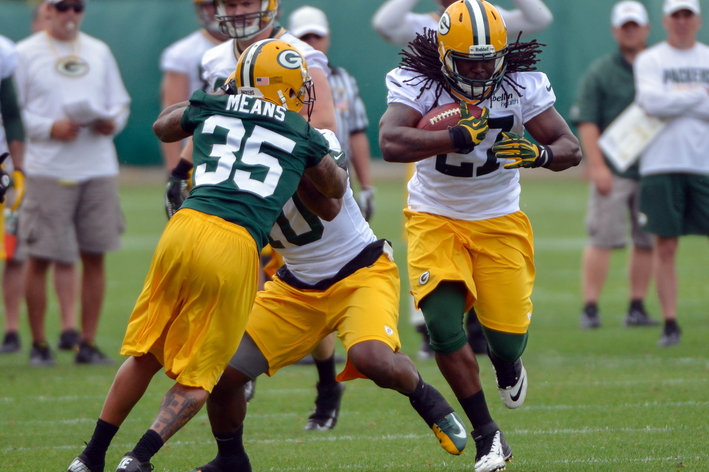 Training camp is underway. Here's a handy guide to the most important position battles in the NFC.

The AFC has more than its fair share of interesting battles at multiple positions. Of course, the quarterback position is the big one, and the AFC has a few of those worth note. There are also plenty of starting jobs on either side of the ball, so we'll take a look at some of the more interesting battles.

This is the big one. Many teams will have backup spots up for grabs, but at least five teams are holding competitions for starters in some form or fashion. These battles dominate the headlines, and they often aren't settled until the third preseason game. We'll talk about some of these below.

The Jets drafted Geno Smith in the second round of the 2013 NFL Draft, and likely consider him their franchise quarterback of the future. But the previous "franchise" quarterback, Mark Sanchez, is confident he can hang on to the starting job. Many believe Smith is too raw to win the battle. However, Sanchez hasn't even come close to sniffing a completion percentage of even 60 percent in recent years, so Smith could certainly make a play for the job.

This is definitely an interesting quarterback battle, given that neither player seems to be the favorite. Kolb's career has been defined by falling short of expectations and injuries, but he was playing well with the Arizona Cardinals before going down with injury in 2012. Then there's E.J. Manuel, the only quarterback taken in the first round of the draft this year. Doug Marrone obviously feels as though Manuel can run his offensive effectively, but Kolb will get every opportunity to convince the Bills to leave the rookie on the sidelines, at least initially.

This offseason, there are a few teams who are still looking for a running back to step up as the starter.

Montee Ball is the new guy in town and is favored to win the starting role in Denver, but he has some competition. Ronnie Hillman has good size and great speed, and fits the mold of what the Broncos are trying to do. Ball is a little more raw at this point, so Hillman might have the advantage early on. Knowshon Moreno has disappointed in the past, but could get another opportunity to make things happen.

Vick Ballard seemed to lock down the running back position last year with multiple players under-performing, but the Colts signed free agent Ahmad Bradshaw so we have a battle on our hands. Most feel that Bradshaw, if he hasn't regressed, will have the edge over Ballard. But it is definitely possible that he has lost a step given the total lack of interest for much of the initial free agency period. Bradshaw is starting camp on the PUP list, losing reps to Ballard.

There are multiple starting cornerback spots up for grabs in the conference. Many of the players vying for the No. 2 job won't be entirely left out in the cold, however, as they'll likely earn jobs at the nickel spot. Let's take a look at the most interesting battles below:

Brandon Flowers has the No. 1 corner role locked down, and the Chiefs paid Sean Smith big money in free agency. That said, he's not guaranteed the No. 2 spot, and actually played the nickel role during minicamp. Smith will have to compete with Robinson for that No. 2 spot, with the loser taking on the nickel role. Smith has been a big talker, but he'll have to earn his starting role throughout training camp and preseason.

Jimmy Smith has a ton of upside, but Graham has flashed some big-play ability. Ladarius Webb has one of the starting roles on lockdown, provided he can stay healthy. Graham was possibly the best player in Baltimore's secondary in the playoffs last year, so Smith could be looking at a nickel role.

A handful of team are in the process of shifting to a 3-4 defense in the AFC. Outside linebacker is one of the most crucial positions to lock down to ensure that defense is successful. There are multiple battles worth paying attention to at the position, so let's get to it:

The Browns have a very good defense, but they need to get the pass rush in order to help out that strong secondary. Paul Kruger was signed to a nice contract in free agency and has one of the spots locked down, but the other spot is wide open. Jabaal Sheard is probably underrated at this point, but he'll have to best first-round pick Barkevious Mingo, and that's a tall order.

Jason Worilds was supposed to be the outside linebacker of the future, and while he has improved, he isn't coming along nearly as quickly as the Steelers hoped. Jones is a rookie, but he has huge talent and could challenge Worilds right out of the gate. So that's what he'll do.