As teams report to training camp, the focus will shift to position battles. Those are the stories that will dominate headlines throughout camp and into the preseason, so we'll talk about the best ones in the NFC.

Position battles are raging as training camps get underway around the NFL. In the NFC, big-name free agent additions and high-profile draft picks are testing incumbents for the right to start in the 2013 regular season opener. Here are some of the biggest position battles to keep an eye on over the next few weeks. 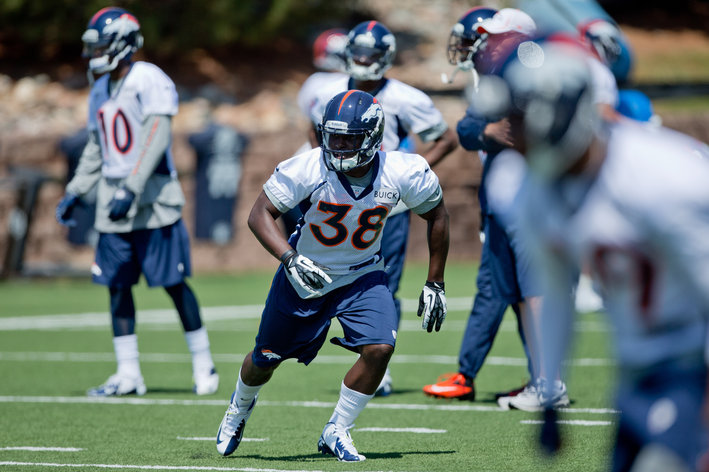 There are plenty of position battles playing out in AFC training camps too. Here's your fight card for what to watch.

Vick vs. Foles is easily the most intriguing quarterback battle going on in the NFC, if not the entire league. When Chip Kelly was hired as head coach of the Eagles, many assumed Vick would be the favorite to start, given how well his mobility fits the offense Kelly ran at Oregon. Reports from minicamp earlier this month indicated that Foles has been outperforming Vick, and may now have a leg up in the competition.

Freeman's job wasn't considered in jeopardy at the end of the 2012 season, but the Buccaneers' selection of Mike Glennon in the third round of the 2013 NFL Draft raised some eyebrows. Head coach Greg Schiano came out in early June and named Freeman the team's starting quarterback, but the fact that the Bucs were willing to spend a Day 2 pick on another quarterback has some wondering about Freeman's long-term future with the team.

Lacy and Franklin are the only two running backs guaranteed to make the final roster barring something terrible happening, so expect the rookies to handle most of the rushing load this season. Harris, Green and Starks all offer unique skillsets, however, and other the three could see extended playing time at some point. If the Packers don't do a by-committee approach, Lacy seems like the most likely candidate to monopolize carries, though that will depend on how well recovered he is from an offseason hamstring injury.

With Steven Jackson in Atlanta, the Rams face an uncertain situation at running back. Last season, Richardson emerged as the No. 2 back behind Jackson, despite being drafted in the seventh round of the 2012 NFL Draft compared to the second round for Pead. That said, Richardson may not be able to match Pead's ability to run between the tackles. Nor Stacy's, whose size and power has made him darkhorse candidate to take over the Rams' goal line and short-yardage duties as a rookie.

Mendenhall is ostensibly the favorite to win the starting job given his experience, but don't count out the field. Williams struggled last season as rookie, but a lot of players would have behind that offense line. Of the Cardinals' two rookies, Taylor is an excellent all-around runner who is physical enough to compete for touches, and Ellington could provide a great change of pace. Overall, there's a lot to like about the Cardinals' running back corps.

Jerome Simpson returned this offseason, and with the trade of Percy Harvin to the Seattle Seahawks, Jairus Wright is eyeing a starting role heading into training camp as well. But Simpson and Wright will have to contend with rookie first-round pick Cordarrelle Patterson. The Vikings see Patterson as their big-play receiver and a true replacement for Harvin, but he is a bit raw and someone like Simpson will probably have the edge to get the initial start out wide opposite Greg Jennings.

Wide receiver is the second-biggest question mark on St. Louis' roster behind safety. They continue to draft receivers early and often, but this year they went big with Tavon Austin in the first round and Stedman Bailey not too long after. They'll jump into the fray with Brian Quick and Chris Givens, early picks a year ago, and Austin Pettis. Austin is pretty much guaranteed a spot, while Quick will be battling to show he wasn't a wasted pick following a shaky rookie season. Givens is the smart bet for the other starting spot, at least initially.

The Packers have a veritable logjam at cornerback. Williams and Shields have the most experience, and would seem to be the favorites to start. House and Hayward are former fourth- and second-round picks, respectively, however, and should not be ruled out. Regardless of the jobs ultimately shake out, it appears that the Packers will have some nice depth in the secondary this season.

The 49ers are stacked at cornerback, and will be even more stacked if Eric Wright is able to find his way to San Francisco. Even without Wright, the 49ers have the firepower to have one of the strongest secondaries in the NFL next season. Rogers and Brown are the incumbents, but Asomugha should compete for playing time if not a starting job despite his disappointing stint with the Eagles.

This battle will be interesting, given that the signing of Desmond Bishop made things very clear: the Vikings are dissatisfied with Erin Henderson's coverage ability in the middle of the defense. Henderson is a converted outside linebacker, while Bishop has been a solid middle guy his entire career. That said, Henderson badly wants to win the job in the middle, so we'll see if he can show the Vikings an improved coverage ability.

Mark Herzlich has been a special teams and role player to this point, but he lined up at the starting spot in the middle during team OTAs and has his sights set on a starting role. Dan Connor was signed to compete with him, and given that he's struggled in recent years, Herzlich does seem to have a solid shot at winning the battle.