What we have in common with Tim Tebow

Tim Tebow was one of the best college football players of his generation, even if he isn't a great NFL quarterback. In one meaningful way, though, he's a lot like the rest of us.

Share All sharing options for: What we have in common with Tim Tebow

There could of course be something about Tim Tebow that we don't know. Maybe he's read everything Charles Portis has ever written and discusses it in a monthly book club with Rob Gronkowski and Darnell Dockett. Maybe he orders waffles "medium rare" and has never tasted ketchup in his life. Or his favorite movie is David Gordon Green's George Washington and it's not close. All possible, but none seem all that likely. It's likelier, by now, that we know most all of what there's to know about Tim Tebow, or at least all of what he cares to share. Media people have either decided or recognized that a lot of people want to know all these things, and so they have told us and told us.

"All these things" being, mostly, that Tebow had an interesting and very devout childhood, is a fan of what are already some very popular bible verses, and enjoys playing football and Focus on the Family and some other things. Simply being this way is now pretty much Tim Tebow's job. And while he is not what you would call a great or even very good NFL quarterback, Tim Tebow is superhumanly good at being Tim Tebow. He never wavers, he never changes or evinces any sort of doubt about who and how he is. Tebow is always exactly himself: a glass of room-temp whole milk that has somehow developed the ability to be buff and talk about Putting The Team First.

The exception to this, which proves the rule that Tebow Gonna Tebow, are Tebow's mechanics, which have been fussed-over and monkeyed with and goofed-on and fretted about from the moment he entered the NFL. Tebow being Tebow, he has done his level best to assimilate all these various tips and suggestions -- most of which must, at this point, begin with a beefy sigh from some exasperated quarterback coach -- and has the Frankensteinian form to show for it. You can see the picture above. Look at his lower body and you'll see that dude probably does some exercises for his calves, but also... well, he is doing some weird things. Here is what he's doing next to how Tom Brady does it.

And here, from own Justin Bopp, is a helpful diagram of all the things that Tebow is doing: 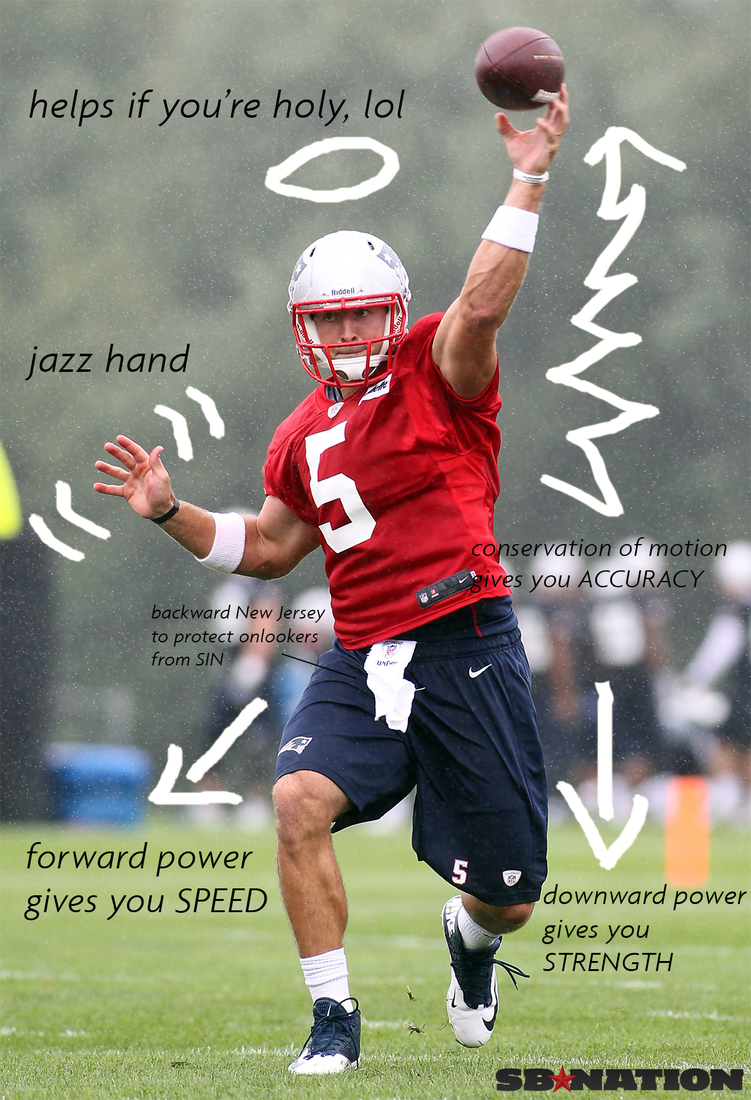 Obviously it is not news that Tim Tebow has exceedingly weird -- like, weird unto avant-garde, borderline impossible -- mechanics. The fact that he appears to be doing some sort of Crossfit-y lunge-and-throw exercise summarizes much of what is weird and wrong about how Tim Tebow throws a football, but this is not a fact that anyone just uncovered.

As Tebow leaves behind his Gratingly Omnipresent Culture War Totem status and enters the Roving Athletic Curiosity/Emergency H-Back portion of his career, his bizarre, hybridized mechanical weirdness has taken on a surprising, backhanded poignance. For all the things about him that approach the superhuman -- I'm just going to point out those calves again -- his inability to throw a football 1) conventionally or 2) in the same way twice is something to which anyone who has ever had a profound sense of his or her own crushing athletic doofiness can easily relate.

Think about the maddening whack-a-mole feeling of trying to figure out something as apparently simple as a golf swing, for instance. It's possible to spend the better part of a life not quite doing this. One elbow finally goes where it's supposed to, and the other, unbidden, starts flapping to beat the band. Quiet things down on the backswing, and suddenly and without meaning to you've added a leg kick. Fix the hips, lose the chin. Every action calls forth an equal and unhelpful reaction.

This losing multi-front battle against every unkillable impulse and broader inborn awkwardness is a lifelong struggle for most non-athletes. Tim Tebow, who is many things, is decidedly not a non-athlete. Without all the negatives in that last sentence: he is a world class athlete. And yet there he is, and there is that picture, and here is Tim Tebow down here with the rest of us, tucking his chin without meaning to, and lunging, and heaving away. We might as well wish him luck.