And a backup shall lead them: AFC edition

Just give the ball to Ryan Mallett. You have insurance for a reason.

Share All sharing options for: And a backup shall lead them: AFC edition

We've already established that backups > starters on the field, but what about in our hearts? What makes the second string quarterback so much more appealing on the emotional level? Simply put, it's that they're so much like us. Sitting there, wearing their best team hat, watching the game, cheering. And then BOOM! Thrust into the action, ready to become a hero out of nowhere, just like we've all dreamed. The backup is you. Well, you plus athletic ability and work ethic and a much higher pain threshold.

The best backups in the NFC 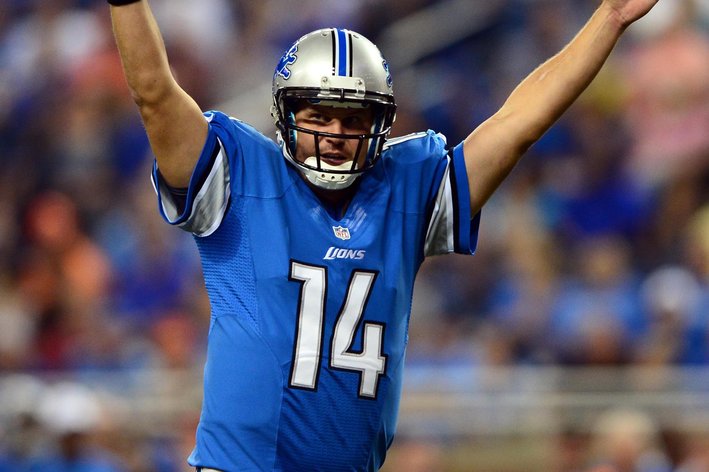 The first month of the 2011 season was hell for most Dolphins fans, but, for Matt Moore, it was ripe with opportunity. Chad Henne's season ending injury, Tony Sparano's desperate need to pull out of his tailspin, a city's thirst for a quarterback it could believe in - Moore had to believe this was his moment. There was, however, one small problem. Throughout that year, Moore was sacked 36 times and tallied 32 rushing attempts. Of those 68 non-passes, 14 resulted in a Matt Moore fumble. And one in five non-passes resulting in a fumble is a good way to convince your team to draft a quarterback in the first round.

None of the other backups in the division have squandered this sort of opportunity. EJ Manuel may well get the chance in his rookie year to see what it's like to go from third-most accurate quarterback in ACC history to NFL starter (answer: it's probably even easier because you get to play with NFL wide receivers and you by definition can't lose to NC State). Geno Smith could be just a few Mark Sanchez interceptions away from baptism by fire, but let's all just agree to hope Geno has a nice, quiet, uneventful year without any meaningful playing time. It's in his best interest as a Jet. And then there's...

The pick: ...RYAN MALLETT. This is not a selection based on reason or sober calculation. This is a pick based on that rarely used part of the brain that sees a bicyclist wipe out on the sidewalk and thinks "man it would be awesome if his bike just blew up out of nowhere." Ryan Mallett is that bike.

Despite his impressive preseason work last year (71% completion rate, 8.4 yards per pass attempt, and four touchdowns to two picks), Chase Daniel only saw action in one regular season game for the Saints. In Kansas City, Daniel may well get the opportuni-ok, you know what? I can't focus on anything other than Chase Daniel's Giant Neck. 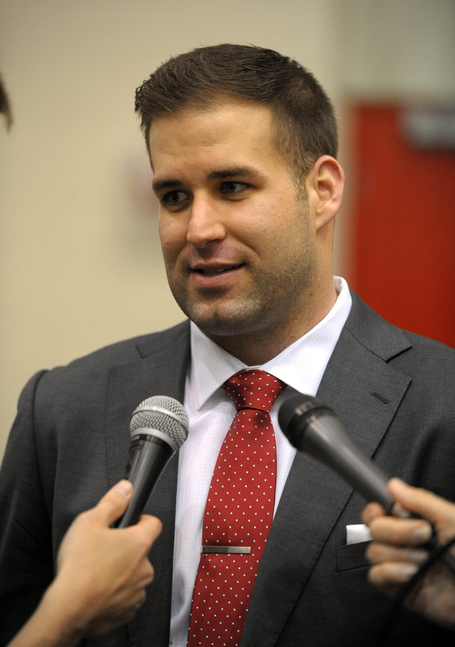 That's at LEAST medium pizza diameter. Possibly large, depending on the establishment.

The comparatively lesser-necked Charlie Whitehurst never threw a pass in his first stint in San Diego, gave Seattle a mere three touchdowns through the air in 154 attempts and returned to San Diego last year to do more of nothing. This is all to say that, while some backups are old classic cars you buy with the intention of fixing up one day, Charlie Whitehurst is the fire extinguisher you keep in the garage, and ... oh God, those rags are burning quickly who the hell knew you had to charge a fire extinguisher it's not like it has a plug.

Just up the coast, what do we know for certain about Terrelle Pryor? We know he's proven to be a threat as a runner. We know he has at least one functioning lung. We know there is no quarterback - not even Troy Aikman - who has started for the Raiders more recently than Pryor. (We also now know that research is hard.) (Shut up.)

Finally, though he was fairly pedestrian in 2012 preseason play, completing less than half of his passes and failing to tally any significant yardage, Brock Osweiler has one thing going for him: it would be hilarious to see an overjoyed Wes Welker celebrating a game winning touchdown with a quarterback nearly a full foot taller than him.

The pick: Chase Daniel. How the hell are you gonna sack that neck? It's like tackling a water tower.

The Bengals now boast a backup QB who is 0-5 as a starter. That's not entirely Josh Johnson's fault, however, as victories were not especially plentiful at Raheem Morris Vineyards ("The Secret Ingredient Is Mercury"). Johnson bears more responsibility for the fact that he's thrown twice as many interceptions in his career as touchdowns. This is the awkward phase of many a quarterback's career, where it's equally likely he's hit his floor as he has his ceiling.

Cleveland has a different problem with Jason Campbell. Statistically, he's more serviceable than you might think; on the all-time lists, Campbell ranks 24th in completion percentage and is tied for 10th in pass interception percentage. Thing is, none of these stats ever seem to matter. Even when you just look at his best performances, Campbell hovers around .500 in the win column. Quite literally, Jason Campbell will not win you games. 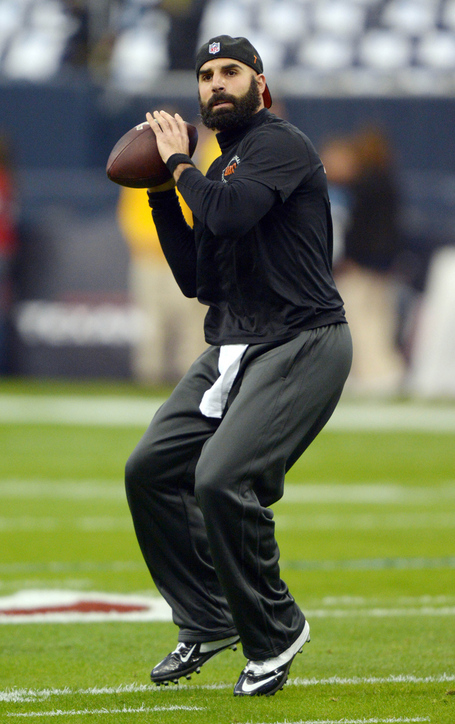 Tyrod Taylor may be a perfectly capable player. In extended action against the Bengals last December, he found some decent rhythm, showed an ability to distribute the ball to a variety of receivers, and honestly this is all pointless because if the Ravens repeat with Tyrod Taylor taking snaps then you should just stop watching football.

The pick: Jason Campbell. At some point, karma has to swing the other way for the dude whose thanks for suffering under Jim Zorn was getting shipped off to Oakland, right?

Want to feel aged? This January, the "We Want The Ball, And We're Gonna Score" game will be ten years old. So much has happened for Matt Hasselbeck since then. A Super Bowl appearance, over 25,000 passing yards and over 200 gallons of milk, assuming he's around average consumption levels. Hasselbeck's certainly got the experience to lead the Colts if Andrew Luck misses time. But does he have any milk left in the tank?

If you're a Titans fan, know this: you are probably going to see Ryan Fitzpatrick play at some point this year, and you are probably going to see him turn the ball over, as only two active players exist with a higher pass interception percentage than Fitzpatrick. But you are going to make a "boy, nice to see someone from Harvard get a break" joke in the office the Monday after his first start, and Lisa in Sales is going to think you're funny and handsome.

The pick: Yates, but, for the record, the breakup with Lisa in Sales was a mutual thing. She didn't dump me and I didn't cry and whoever told you that is a liar.

• Debrief: What happened to the AFC?

• The greatest backup of them all, NFC edition

• Roth: What we have in common with Tim Tebow