Percy Harvin injury not a deathblow for Seahawks offense

The Seattle Seahawks will likely lose Percy Harvin for a significant amount of time, but it's not a deathblow to their offense, which features one of the best running games in the NFL.

Share All sharing options for: Percy Harvin injury not a deathblow for Seahawks offense

With the news that Seattle Seahawks wide receiver Percy Harvin will require hip surgery and could miss a good deal of time, the fanbase may be intent on hitting the panic button. That would be a mistake, even if Harvin is out for the entirety of next season (which doesn't seem to be the case at this point).

You see, the Seahawks didn't give up a first-round pick (and then some) to the Minnesota Vikings to fix a broken, lacking offense. As it stood, their offense, led by quarterback Russell Wilson and running back Marshawn Lynch, played a big part in taking the Seahawks to 11 wins and a victory in the Wild Card round of the playoffs last year.

The Implications of Harvin's surgery 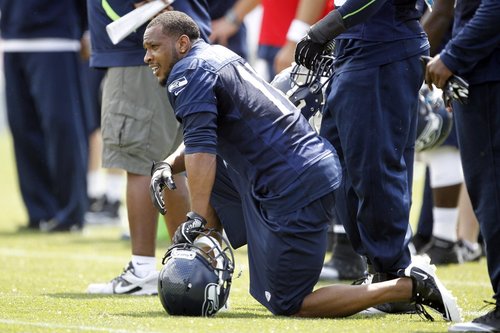 Sure, Seattle didn't have any 1,000-yard receivers on the roster, but Sidney Rice managed 748 yards and seven touchdowns, while the ever-improving Golden Tate had 688 yards with seven touchdowns of his own. Wilson, a rookie out of the third round, threw for 3,118 yards and 26 touchdowns last season.

Seattle was looking to add more athleticism and versatility to that group of receivers, of course. Seattle was likely preparing on airing it out a good bit, but the offense wasn't going to change drastically from last season. If Wilson throws for that many yards, that many touchdowns and the Seahawks put up more than 30 points per game, as they did over the final 10 games of the season, Seattle will be plenty happy.

That's not even taking Lynch and the running game into account. Seattle will have to "fall back" on a rushing attack that put up 2,579 yards and 16 touchdowns last season, good for third in the NFL behind only the Washington Redskins and Minnesota Vikings, and one spot above the division-rival San Francisco 49ers.

Lynch himself had 1,590 yards and 11 touchdowns, with a per-carry average of 5.2 yards. Wilson is a mobile quarterback and managed 489 rushing yards and four rushing touchdowns of his own. Seattle isn't exactly devoid of dynamic offensive threats, thanks to having Wilson.

It's true that Harvin would have added another dynamic to Seattle's offense, but it's much more likely that his absence has an effect on the return game. Seattle released last season's kick returner, Leon Washington, after acquiring Harvin. The plan was for Harvin to handle the primary kick return job, but now it will fall to one of Tate, fellow receiver Bryan Walters, or cornerbacks Jeremy Lane and Will Blackmon.

Heading into last season, Seattle's offense needed a quarterback, not a receiver. They were labeled as a team with an elite defense -- perhaps the NFL's best -- who just needed someone to competently run the offense. They got that and much more with Wilson. While it's a big shame to lose Harvin for any extended period of time, especially given the price tag, it's not a deathblow by any means.

• Whose stock is rising and falling after a weekend of camp?

• The greatest backup of them all, NFC edition | AFC edition

Percy Harvin injury: Seahawks WR could be available for playoffs