Defensive end Michael Johnson and the Cincinnati Bengals don't appear close to coming to terms on a contract extension prior to the July 15 deadline.

Share All sharing options for: Michael Johnson not expected to sign new deal with Bengals prior to franchise tag deadline

Michael Johnson and the Cincinnati Bengals don't appear any closer to working out a new contract. According to Joe Reedy of Cincinnati.com, Johnson said he isn't worried about the contract, and that whatever happens will happen.

Johnson, a defensive end, is set to play the 2013 season on the franchise tag, and will carry a one-year salary of $11.75 million, which is an average of the top five contracts at the position. Cincinnati has until July 15 to get a new deal done for Johnson, otherwise he will play on the tag and the two sides will be unable to work out a contract extension until the next offseason.

Hold off on a long-term deal? 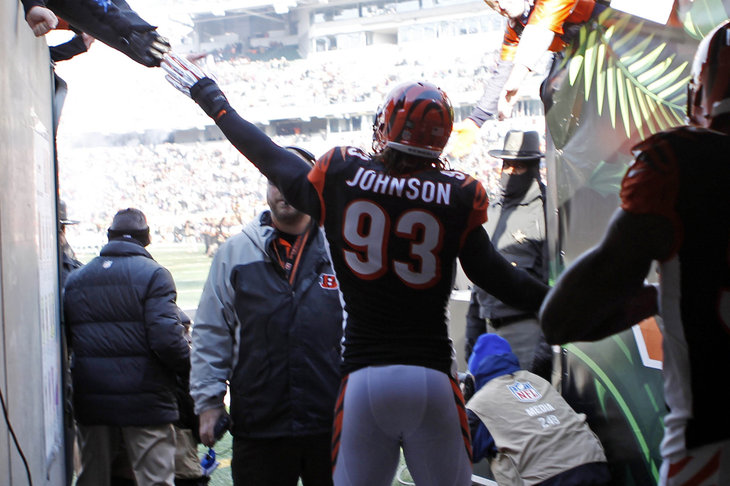 One respected national writer suggests that it was might have been the best thing to not to re-sign Johnson... at least, not yet.

Waiting until that point seems risky given that both Carlos Dunlap and Geno Atkins -- starters on the defensive line -- are set to become unrestricted free agents as well. On top of that, the team will likely be looking to lock up quarterback Andy Dalton and wide receiver A.J. Green, as they would hit free agency the following season.

To this point, Johnson has played well enough to earn a new contract. He put up 11.5 sacks last season, just one sack behind Atkins. He's definitely among the NFL's elite when it comes to defensive ends, but Atkins might be a bigger priority. Allowing Johnson to play this season out on the tag makes it more likely he departs during next year's free agency period, but it also might be the best way for the team to keep Atkins.

On top of that, it gives Dunlap another opportunity to show the Bengals that he's good enough. Dunlap has shown flashes of brilliance but has fallen short of expectations, primarily due to injuries. If Dunlap has a strong season, then the Bengals might be able to retain him and Atkins and let Johnson walk.