Zero Sum Game: Reviewing each preseason matchup for what it is

There can be only none.

Share All sharing options for: Zero Sum Game: Reviewing each preseason matchup for what it is

Preseason football is a place of nothingness, where victories and defeats mean nothing and stats are wiped clean once the regular season starts. There are no winners or losers, so we are forced to review each matchup for what it is: a zero-sum game.

+1: Second-year receiver LaQuan Williams, who recovered a blocked punt in Tampa's endzone, on top of catching 2 passes, including a 21 yard touchdown reception. In exchange for his hard work, Williams got to spend Sunday...reading about Baltimore's signing of Brandon Stokley. Well, shit.

-1: Buccaneers running backs, who only ran for 2.8 yards a carry as a group. On the one hand, neither of Tampa's regular starting guards suited up for this game. On the other, this does not exactly suggest any meaningful depth on the offensive line.

+1: Falcons punter Matt Bosher got seven chances to show off his leg, and, overall, he didn't disappoint - Cincinnati wound up with an average starting field position of their own 20 yard line on six of those punts. Sure, the seventh got taken back for a 71 yard score by Dane Sanzenbacher. But you can't have a long punt return without a long punt, right?

-1: Mohamed Sanu finished the night with no catches on two targets, and if there's the one thing the preseason is for, it's making wildly irresponsible conclusions about players returning from injury based on very limited sample data.

+1: Brandon Weeden's 76 percent completion rate was better than any game he put up in 2012, and his 8.6 yards per passing attempt would have qualified as his third best average last year. If the Browns can have an efficient quarterback, doesn't it feel like anything's possible?

-1: Bernie Kosar. Not because he trashed various Rams players. No, Kosar's mistake was tangling with the Holy See. The Catholics got Apple money, Bernie. They'll certainly buy a local affiliate just to fire your ass if you piss them off.

+1: Who's that scoring the final touchdown and the go ahead two point conversion? Why, it's Pat White! It's nice to see White healthy and back in the league, and it's even nicer to hear Washington fans insisting that Rex Grossman should beat him for the third QB spot because he's the safer and more reliable option.

-1: Bacarri Rambo's belief in the linearity of space-time.

+1: Irrationality. You would think the team that sees its first nine drives end in eight punts and a turnover on downs would lose the game. The Broncos defy your expectations, however, and not always in fun ways.

-1: San Francisco's third down conversions, which didn't even exist until the end of the third quarter. Look, this was just a classic battle between two SEC teams that play tough, grind-it-out football. FANCY AIN'T WIN YOU A CHAMPIONSHIP, MAN. 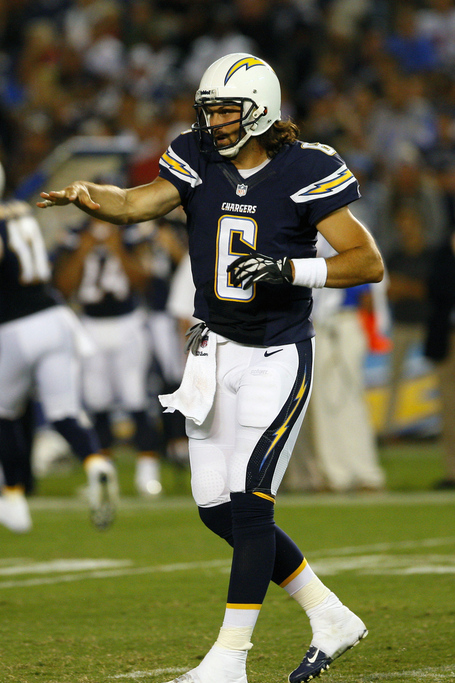 It's exactly what I imagine watching Scott Stapp play quarterback would look like.

+1: Mark Sanchez. Yes, I know about the Ansah pick six. It was bad. It was real bad. But look at what Mark Sanchez did on his next two drives: 9/10 passing, 115 yards, one touchdown, no sacks taken, and passes completed to seven different receivers. That looks totally competent and we should give Sanchez credit accordingly. (Also I'm pretty worried Sanchez will go all Richie Tenenbaum on us otherwise.)

-1: Reggie Bush. Five yards on three carries, no receptions on two targets. Were this the regular season, Bush would now explode for 140 yards and two touchdowns next week just because you benched him in fantasy.

+1: Haters win, because Tim Tebow still does not even vaguely resemble a capable NFL quarterback. It's reached the point where Tebow has become a dog trying to learn Portuguese. The issue isn't whether he's a good dog, or whether we've found the right linguistic dog trainer, or what classroom setting the dog is in. The issue is that this dog is not learning Portuguese. Ever.

-1: Other Haters lose, because Chip Kelly doing Oregon shit might just work after all.

+1: Caleb Sturgis, who showed a strong leg on kickoffs and hit both of his field goals, including a 58 yard attempt. Consistency in the kicking game has eluded the Dolphins, who haven't finished in the top half of the league in field goal percentage in consecutive years since 2004 and 2005.

-1: Blaine Gabbert has mastered the 2 minute drill, and by that I mean his four drives averaged about a minute and a half of clock spent before the Jaguars punted or turned the ball over.

+1: Tyrann Mathieu's debut included four tackles, a sack, a pass defended, and a nice 24 yard punt return. He's clearly benefitting from the additional structure the NFL provides, as well as the fact that you can't buy weed during games, which wasn't true in Baton Rouge. (What's up, Big Ron in Section 218!)

-1: Green Bay's first quarter wasn't awesome, with the first drive ending on downs at Arizona's 1 yard line and the next two resulting in Graham Harrell turnovers. But quarters two through four managed to be bad and uninteresting for the Packer offense: eight punts and an average of 11.6 yards per possession.

+1: He didn't face a first team defense, but Cierre Wood's 73 yards on 11 touches was still a nice sign for the rookie. Plus he got to see DeAndre Hopkins do this in person!

That's gonna be a good memory. Unless you're Vikings defensive back Bobby Felder, in which case shhhh shhhhhhhh it was just a bad dream shhhhhhhhhh.

+1: New Orleans quarterback Ryan Griffin, who has definitely used "Yes, I'm NFL quarterback R. Griffin" on a less-than-diligent hotel clerk/autograph hunter/online dating service user before. It's not deceit if you're telling the truth!

-1: A fumble, a three and out, and no offensive yards gained after a Knile Davis kick return set you up at the New Orleans 27? That's not gangster, Tyler Bray. That's not even a little gangster.

+1: Combining his preseason and regular season totals, Carolina cornerback Josh Morgan has three career interceptions. All of them have come against the Chicago Bears. Josh Morgan's personal Heaven is a place where Jay Cutler is constantly throwing off his back foot and across his body.

-1: Ted Ginn, Jr. only snared one of the seven targets directed his way, but he will never be Sad Green Room Brady Quinn, which is a blessing.

-1: Those Who Did Not Trade For Kyle Orton. 100% of his passes completed. 100% of his drives resulting in touchdowns. KYLE ORTON IS A 200 PROOF QUARTERBACK.

+1: Bruce Gradkowski, you only have to do two things to keep from losing the backup job to Landry Jones or John Parker Wilson. 1) Stay alive. 2) Actually, you can probably beat them both out even if you're dead.

-1: Of Da'Rel Scott's 10 carries, 7 resulted in a gain of two yards or less. This is not a good way to get invited to Tom Coughlin's Cribbage Night (Sponsored By Triscuit), Da'Rel.

+1: At Doug Marrone's (Syracuse) direction, E.J. Manuel (FSU) got to hand the ball off to C.J. Spiller (Clemson) and Tashard Choice (Georgia Tech) and throw it to T.J. Graham (NC State) and Dorin Dickerson (Pitt). The New ACC is totally awesome, you guys!

Push all those chips to the center of the table, Shaun. Waiting to let a guy play, I dunno, more than a half, is for suckers.