The former Redskins quarterback is annoyed that Robert Griffin III is ignoring his advice.

Share All sharing options for: Donovan McNabb says RGIII is 'getting brainwashed'

The back-and-forth between Donovan McNabb and Robert Griffin III opened a new chapter this week, as the former Washington Redskins quarterback voiced displeasure over the behavior of the team's current phenom.

McNabb has made critical comments of Griffin in the past, but has since said he wished to sit down and counsel Griffin as the second-year player attempts to return from an ACL tear. Griffin turned the offer down, later saying in an interview with GQ, "it's probably best we don't talk."

The Redskins' offense under RGIII 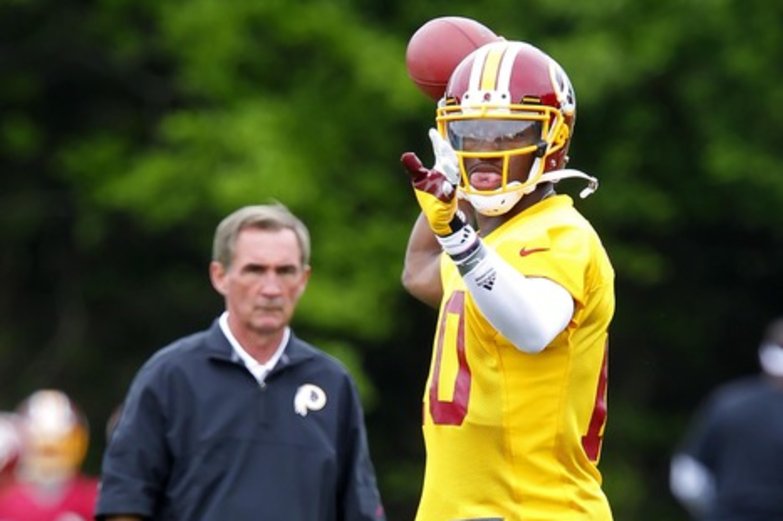 The Redksins' offense with Robert Griffin III at the helm wasn't as different from previous seasons as you might expect.

In the most recent round of the public dispute, McNabb reacted to those comments on NBC Sports Radio's Under Center with McNabb and Malone:

McNabb was also critical of the Redskins' organization, which is being heavily scrutinized for its management of Griffin's rehab.

"I honestly think that over there in Washington he's getting brainwashed."

Griffin, who tore his ACL during the team's playoff loss to the Seattle Seahawks last season, has been very vocal about his limited role in practice and his preference to play during the preseason, but head coach Mike Shanahan remains steadfast in his decision to keep Griffin out of harm's way until the regular season.

McNabb, who spent one mediocre season in Washington in 2010 at the tail end of his 13-year NFL career, has thrust himself into the developing media circus. Two weeks ago, he told the Washington Post that he thought Griffin was "doing too much" this offseason.

I understand RG has a lot of stuff going on.  But if you're coming off ACL surgery, you don't need to be having a press conference at OTAs. Every week? Really? It becomes a circus, a sideshow. It takes away from the focus of what those sessions are supposed to be about: the team.