What even Riley Cooper knows

It's tough to misunderstand what Riley Cooper did. Some people seem intent on doing it anyway.

Share All sharing options for: What even Riley Cooper knows

There are some complicated things about the Sleeveless Riley Cooper Drunkenly Directs Racial Slur At Black Man story, but none of those complicated things are the story itself. There is the ongoing Kenny Chesney Question, which begins with "Why... I mean..." and a queasy sigh, and has no real end or answer, just a lot of Chesney's Corona Light commercial vibes and horrendously trashed parking lots and white people acting appallingly.

There is also the question of how Cooper's on-camera night of frank bullying racism goes over at his workplace, with some teammates more willing to forgive/forget than others. And there's the image of Cooper going through a team practice totally alone yesterday, in close parallel to and utterly distant from his peers, which is telling on its own and especially eloquent as an example of how workplaces handle overt racism in 2013. Cooper's recent excusal from the team to attend vague, cosmetic-seeming counseling is another example, if one that -- like the ritual phone calls to "leaders" in the slurred community -- rings queasily false and public relational and evasive in a uniquely contemporary way. There are the specifics regarding the context and content of Cooper's idiotic offense, and there's his apology for it.

Riley Cooper said a supremely awful word to a human.

There's all that, and that's all worth parsing, if you're into that sort of thing. But the thing is the thing, finally. Riley Cooper said a supremely awful word to a human that word was invented to dehumanize. He said it in an environment whose power dynamics tilted notably toward him, and without any evident sense of or respect for the word's tragic weight. He is facing and will continue to face the consequences for that, for no reason more sinister or less obvious than the simplest one -- employing someone who loudly says bigoted things isn't good for workplace morale. Someone who is not you or me will decide on the immediate specifics of those consequences, for reasons that he -- it's a man and he works for the Philadelphia Eagles, we know that much -- arrives at on his own.

So we mostly know how this is going to go and what it is. There's not really a new lesson, here -- drunks make terrible choices; entitled drunks wield power with all the grace you'd expect; something needs to be done about Kenny Chesney; the word generally agreed upon as the ugliest in the language remains as ugly as it has ever been. The story is still here because it's not finished, yet -- Cooper has not yet been cut, let alone embarked on his eventual return to the sport after an implicitly agreed-upon cooling-off and contrition period. And also because it's August and there's not all that much going on and because it's possible to get Tim Tebow -- Cooper's roommate at Florida, as you must know by now -- involved. But everyone who wants to understand this already understands it.

Which brings us to the people who don't want to understand it.

uh huh RT @Rangenius: I hear a lot of those same words in rap songs. I demand all those Rap "artists" apologize.

The good news is that everyone really does understand the reasons why what Riley Cooper said was horrible and wrong. There are people making very good salaries -- in sports media and not in sports media -- whose job it is to obfuscate this sort of thing, or make it about something that might Get The People Fired Up, but they all know it, too. There are other people, blessedly not as many or well-followed as you might fear, who have made a hobby of sending @-replies at Bomani Jones on Twitter, in which they pretend not to know it. They also know the true things about this.

The game, in both cases, is pretending not to -- a sort of curdled, morally questionable version of Who's On First played with higher stakes. Thus these naughty boys and girls: teasing out imaginary fallacies and tearing at the chains of their own pretend oppression. They demand apologies and abhor inconsistencies. They want to know why this and not that. They brook no bullshit -- no time for it, never had much tolerance for it.

@RileyCooper_14 we have free speech no one apologized for saying white men can't jump, I'm a giant fan but now a fan of yours too #beProud

They are not racists, and as non-racists, they want to know why they can't say a word imbued with and embodying all the long viciousness of America's horrific history on race. They would not use it in a racist way, of course, but they really seem to want to use it. They are saddened, deeply saddened in fact, to see cynics and race hustlers turning a story of a white man calling a black man a nigger into some sort of black/white thing.

This is all a stupid thing to do, of course, and kind of a sad one. The internet is a great (that is, not at all great) place to watch all these defective LogicTron 1000 types in action. Input any outrage and watch these old greasy things clank and smoke and throw bolts before finally serving up some nutty semantic solipsism on dot-matrix printout ending QED JAY Z/OBUMMER IS BIGGEST REAL RACIST. It's magnificent to watch, in a way, the amount of work that goes into not having to acknowledge a thing of which they already have knowledge. 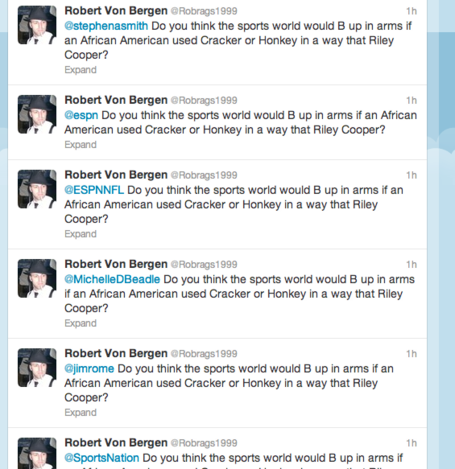 The internet is a bigger and weirder thing than its fusty media caricature as a den of predatory, Pringle-chugging trolls. It is, on balance, a lot better than this. But it's also fundamentally neutral, and its various platforms can work well as variously safe spaces for these people to say things they clearly want to say out loud, but don't. This is not because of The Tyrannical PC Assault On Free Speech or whatever, but because the speaker and everyone else know that these are just awful things to say, that they're hurtful and loaded and ugly and ought not be said for those reasons. They play these games where they play them because they don't want to be overheard saying this stuff out loud, and they know why that is, too.

Sports are sports, but they're an easy, rich proxy for other things, too.

The idiot logic games and flubby debater's points about who can say or should feel whatever are flimsy and false because they are flimsy and false. They're a cheap thing hung over another thing, because that under-thing is unsightly and embarrassing, but apparently too costly to break down and remove for those with it in their living rooms. Sunlight reveals how tattered this drape is; moths burst from it in a dank cloud of Limbaugh fart. It's gross. It's all very gross.

Sports are sports, but they're an easy, rich proxy for other things, too. We all see the same games, but reach them in our own ways, from our own angles of approach, because we're all different. But there are some things we all know to be true, and if we all have our own relationships with that knowledge -- accept and live in it or break a sweat trying to find a way to make it be less true -- then that stands to reason given the we-are-all-different thing.

But we might as well admit we know what we know. Riley Cooper knows what he did. He doesn't look all that good at the moment, and the stink of this will follow him a long time. The evidence certainly suggests he's an idiot. But at least he's not pretending not to know what he did, or why it's wrong, or what words mean, or that this is about anything but what it's so clearly about.

• LeSean McCoy: ‘I can’t respect a guy like’ Riley Cooper