The league and some 4,500 players have reached a $765 million agreement.

The NFL has reached a $765 million settlement with more than 4,500 former players who brought suit against the league for brain injuries suffered on the field, according to court documents released on Thursday. 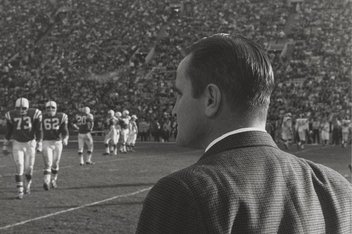 Mark Pellington knew violence long before he directed Pearl Jam’s video for the song "Jeremy," a crazed, strobe-lit collage of adolescent despair, for his father Bill, a legendary linebacker for the Baltimore Colts in the 1950s and 60s, was as violent a player as the game has ever seen.

The settlement will save the league years of costly litigation, and it provides former players and their families with medical assistance and financial support. The agreement will fund medical exams, concussion-related compensation and medical research.

"This is a historic agreement, one that will make sure that former NFL players who need and deserve compensation will receive it, and that will promote safety for players at all levels of football," said former United States District Judge Layn Phillips, who supervised the negotiations. "Rather than litigate literally thousands of complex individual claims over many years, the parties have reached an agreement that, if approved, will provide relief and support where it is needed at a time when it is most needed."

Now that an agreement has been reached, it will be submitted for approval from United States District Court Judge Anita Brody, who must OK the deal before it passes. Brody sent the two sides to mediation prior to ruling on whether the case would go forward in the courts. The NFL argued that the issue was a labor matter covered by collective bargaining agreements and should go to arbitration.

As part of the settlement, the NFL will not be considered liable for these injuries, and it also avoids an admission that the injuries were caused by football.

"The settlement does not represent, and cannot be considered, an admission by the NFL of liability, or an admission that plaintiffs’ injuries were caused by football."

Retired players suing the league over the issue argued that the NFL knowingly concealed the long-term effects of concussions and head trauma caused by playing the game.

The plaintiffs in the case include members of the Pro Football Hall of fame, as well as the family of former Pro Bowl linebacker Junior Seau, whose suicide last year was rumored to be linked to brain injuries sustained from football.