The NFL will have a couple rule tweaks for 2013, some of them more noticeable than others. Here's everything you need to know about what's different this year.

The NFL announced several rule changes on Tuesday, some of which the public was already aware of. Here's a quick primer on what's different for 2013, and a couple points of emphasis that referees will be looking for.

Hitting with crown of helmet

This is the one that people already know about. The new rule states that both runners and tacklers are prohibited from initiating contact with the crown of their helmet outside the tackle box. The components of an illegal hit are: (1) The player must line up his opponent, (2) the player must lower his head, and (3) the player must deliver a forcible blow with his crown to any part of the opposing player's body. 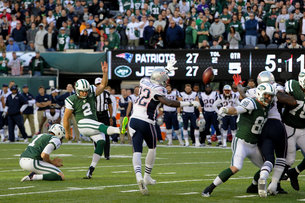 The first ever imposition of a new unsportsmanlike conduct rule costs the Pats a game in overtime.

Violations will result in a 15 yard unnecessary roughness penalty, as well as potential discipline from the league if warranted. If both players are moving at an angle or haven't lined up their opponent yet, then no foul will be assessed on the play.

On field goal or extra point plays, the defense cannot have more than 6 players on the line of scrimmage on either side of the snapper. If they do, it will result in a 5 yard Illegal formation penalty. Defensive players also can't push down linemen into the offensive line. That will result in a 15 yard unnecessary roughness penalty.

Another new wrinkle for kicking plays is that the snapper will be considered defenseless and can't be contacted until he becomes an active blocker. Contacting the snapper before they begin engaging as a blocker will result in a 15 yard unnecessary roughness penalty. A defensive player trying to split the center/guard gap is not a penalty, but can be if they make unnecessary contact with the snapper.

Peel back blocks are now illegal anywhere on the field, and will be subject to a 15 yard penalty and potential discipline from the league. The peel back block was previously illegal only outside the tackle box. For the block to be legal, the blocker's near shoulder must get fully across the opposing player's body.

All violations of player safety rules are subject to potential fines or suspensions. All violations of rules regarding contact to the head of defenseless players shall be considered for suspension if: (1) the striking player took an unobstructed path, (2) the opponent's position hasn't been affected by another player, and (3) contact was clearly avoidable. Mitigating factors will be taken into account if they are available.

One or more prior violations of this type means the player will be suspended, even if there are mitigating circumstances.

All players besides kickers and punters are now required to wear thigh and knee pads. This brings the NFL in line with every other level of organized football. If a player comes out onto the field before a game without the pads, he will not be allowed to play until he puts the pads on.

A play can still be reviewed if a coach erroneously throws a challenge flag. If the play in question is a scoring play, turnover, play inside 2 minutes of a half, or during overtime, the team will be charged a timeout automatically. If the team does not have any timeouts, they will be assessed a 15 yard penalty, but the play will still be reviewed.

Referees will make the following situations points of emphasis for the 2013 season: