In today's roundup, J.J. Watt isn't happy about the NFL's renewed crackdown on celebrations while Michael Vick has been named the starter for the Eagles' first preseason game of the 2013 season.

The star defensive tackle's contract is up at the end of this season, and the hope was that Atkins and the Bengals could come to an agreement on an extension before the regular season began. Atkins has become a powerhouse tackle in the NFL since being drafted in 2010, being named an All-Pro in 2011 and 2012 and putting up 12.5 sacks last year. 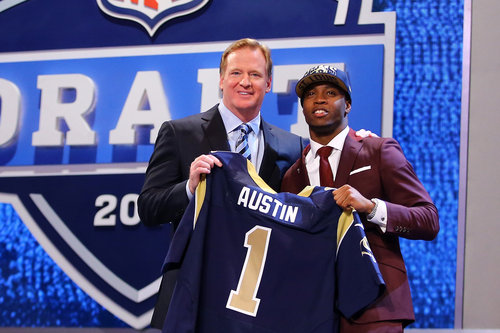 Dynamic players like Randall Cobb and Tavon Austin deserve so much more than bubble screens and wildcats.

Atkins will likely get hit with the franchise tag should the two sides not come to an agreement. There was optimism that the Bengals and Atkins could come to a compromise, but it's clear they're nowhere near a deal.

J.J. Watt isn't happy with the NFL's decision over celebrations

The NFL continues to live up to the No Fun League moniker amid reports that the league will once again be taking a hard stance against "excessive celebrations," which will apparently now be directed at players spinning the ball on the ground after a play. There will also be a crackdown on military salutes, a rule that was part of the 2012 handbook but which will be more strictly enforced this season.

That doesn't sit so well with Houston Texans defensive lineman J.J. Watt, whose salute after sacks has become his trademark. Watt says that taking away his salute is wrong, especially since it's done as a sign of respect:

"I do my salute as a sign of respect and appreciation for the military and I think it's kind of a bad deal they're going to take away something that I'm trying to show respect to the people who protect this country and freedom to the game and who allow us to play this game. If it wasn't for the men and women overseas protecting us I wouldn't be able to play football. The NFL gives us gloves that say salute the service I can't even salute to the service because they don't let me. Something needs to be done about that. I think it's a bad deal. I don't have a plan yet. I'm prepared to pay some fines if I need to because I'm not going to stop respecting our military."

The good news is the rule is meant for salutes directed at the opponent, so perhaps Watt won't be so angry this season after all.

Bills will give C.J. Spiller the ball 'until he throws up'

The Buffalo Bills offense wasn't very good last season under head coach Chan Gailey, so as the Bills cleaned out the front office, the coaching staff was turned over as well. Enter rookie offensive coordinator Nathaniel Hackett, who made it known that this year the Bills will be featuring star running back C.J. Spiller -- to the point that the fourth-year back will be chucking up his lunch.

"It's real simple," Hackett said. "We're going to give him the ball until he throws up. So he's either got to tap out or throw up on the field. Let's just put it that way."

Spiller averaged 6.0 yards per carry in 2012, yet was handed the ball just under 13 times per game last season. With the Bills looking to put a more explosive and balanced offense on the field in 2013, Spiller will become the focal point of an offense that looks to put the ball in the hands of its most talented player.

The Cleveland Browns' star young running back won't be on the field on Thursday night against the St. Louis Rams, as Richardson continues to battle through some tough injuries that have kept him sidelined for a good portion of the 2013 offseason.

Richardson, the third overall pick in 2012 out of Alabama, averaged just 3.6 yards per carry for the Browns last season as he took on the feature role for the Cleveland offense in his rookie season. While he did get into the end zone 11 times, Richardson battled though nagging injuries that limited his effectiveness.

The second-year back was kicked in the shin last week and will be held out as a precaution in what is generally a game reserved for backups.

Michael Vick will start for Eagles on Friday

The veteran quarterback will get the first crack at proving his mastery of Chip Kelly's system, as Vick will start on Friday night against the New England Patriots. The Eagles have had an open competition between Vick and Nick Foles for the starting quarterback job, and so far neither has been able to really separate himself in practice.

Vick would supposedly have the upper hand in the new offense, although it's expected that the read-option might not be as prominent as you would expect. Vick appeared in 10 games last season and struggled significantly, leading the Eagles to just three wins while tossing 10 interceptions. Foles wasn't much better, as Philadelphia limped to a 4-12 record on the season.

• Jim Harbaugh and the question of burnout