It's still all about Jay Cutler

As the Bears quarterback enters a contract year, his excuses are running out. It's all part of the plan.

Share All sharing options for: It's still all about Jay Cutler

BOURBONNAIS, Ill. -- There's an inherent catch-22 in following NFL training camp minutia, one that can keep an optimist floating in the clouds while driving a pessimist toward inner insanity. The tension was on full display just one play into practice for the Chicago Bears on Wednesday.

On Tuesday, the prevailing topic in Bears coverage wasn't Jay Cutler's four interceptions as much as why they were thrown. More than one of those picks happened because the Bears' defense -- forever focused on creating chaos, even in practice -- batted Cutler's pass at the line, inevitably resulting in a turnover. Cutler and rookie head coach Marc Trestman stressed after practice this wasn't how it was supposed to go. The defensive linemen are instructed to stop their rush at a certain point, keep their arms down and let the offense run through their plays.

You can only imagine how the meathead contingent reacted. Trestman is soft, Cutler forever petulant, and the culture of finding any and all excuses to cover up the quarterback's lack of on-field production hadn't changed despite a new regime being installed over the offseason.

Fast-forward a day later, when all of Bourbonnais suddenly came down with an anxious sense of déjà vu. On the first play of 11-on-11s, Cutler's pass was tipped at the line and the ball landed in the hands of linebacker James Anderson, who started running the other way. Everyone involved on both sides had seen this picture before.

Should Bears fans be encouraged an aging defense still seems to have a knack for creating turnovers even after the dismissal of Lovie Smith, the man who emphasized it with his every breath? Or should the focus be what hasn't changed on the other side, the same flaws in Cutler that have teased a championship-hungry fan base into delirium over the last four seasons?

The truth is everything in the Bears' insular world remains all about Jay Cutler, and anyone who tells you otherwise is lying. The Bears put their money where their mouth was this offseason with four key moves: a) going to Canada to hire a supposed genius of an offensive playcaller as the new head coach, b) investing a guaranteed $18 million in left tackle Jermon Bushrod, the richest contract for an offensive lineman in team history, c) signing tight end Martellus Bennett to a big deal, d) using a first-round draft pick on guard Kyle Long. 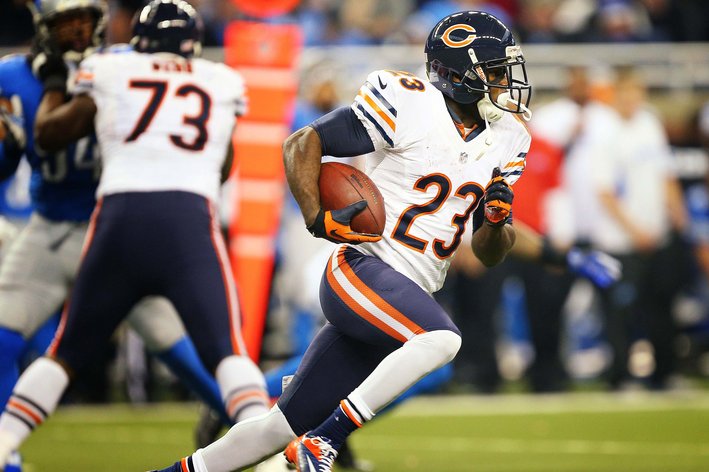 The greatest return man of all-time has a refined focus this year that could lead to big things.

The message was clear: The Bears are ride-or-die with Cutler, and they're doing everything to make his fifth season in Chicago a breakthrough.

Wins aren't the only motivation, though, even if that's what will cure all that ails. Cutler, now 30, is entering the final season of his contract, and the stakes are equally strenuous for the player and the team. General manager Phil Emery has said no new contracts will be handed out during the current season, a philosophy that puts Cutler under the gun.

Bears ownership has acknowledged their gamble. If Cutler has a big season and the Bears make a run late into the playoffs, the gigantic offseason contracts signed by Joe Flacco and Tony Romo will be used as a barometer for Cutler's new deal. And if Cutler again fails to deliver on his immense physical promise? The Bears could likely let him walk and go in another direction.

There may be more pressure on Cutler this season than he's ever faced in life. Just don't expect him to attest to it.

The narrative with Cutler has often focused on everything other than football, even if football has always been the biggest problem. Throughout his tenure in Chicago, Cutler has been questioned for things as ridiculous as a perceived lack of toughness, a lack of leadership and mostly for his poor body language. It isn't hard to find examples.

In Week 2 of last season, as Cutler threw four interceptions and the Bears were blown out against the Packers at Lambeau Field, Cutler reamed out J'Marcus Webb after Clay Matthews beat the left tackle like a drum for the umteenth time that night. A few weeks later against the Cowboys, as offensive coordinator Mike Tice approached Cutler on the bench to go over strategy, Cutler just got up and walked away. A year earlier, Cutler may have told then-OC Mike Martz to fuck off.

It all goes into Cutler's reputation, or -- if we're being generous -- his legend. Cutler has made it past the idiots who once questioned his toughness for exiting the 2011 NFC Championship game against the Packers with a torn MCL. Another look at his concussion history shows Cutler is probably too tough for his own health. But anyone who has dealt with Cutler will tell you some aspects of that reputation aren't overblown. Jay Cutler is kind of a dick, and he doesn't care what you, or anyone else, think about him.

It's a worldview that has helped Cutler stay above the sanctimonious finger wagging that seems to come down on anyone who plays quarterback. You cannot hurt someone who does not care. But for all of the attention Cutler's personality receives, there's still the football part. For the Bears to finally take off in Cutler's fifth season, that has to be the focus.

The problem with Jay Cutler is his excuses are all pretty legitimate. This will be Cutler's fifth season in Chicago, and he's working with his fourth new offense. The issues go beyond X's and O's, too. Cutler's best statistical season in Chicago was 2010, when he threw 23 touchdowns and 16 interceptions. That season, Cutler was sacked an NFL-high 52 times. The Bears' offensive line has remained at league-worst levels ever since.

The receivers weren't much better before a trade reunited Cutler with Brandon Marshall last season. Just how much was Cutler dying for a playmaker in the receiving game? Marshall ended up with 118 catches on 194 targets. He  was targeted on 40.2 percent of the Bears' passes last year, the highest percentage for any receiver in the league since at least 1991 by a healthy margin.

The Bears are counting on Bushrod to fix the offensive line and on Bennett and second-year receiver Alshon Jeffery to give Cutler more options. Cutler, never known for pinpoint accuracy, will have some huge receivers when Marshall, Bennett and Jeffery line up out wide. Seeing them tower over the Bears' defense in practice hammers home the point.

Cutler's excuses aren't just running out, they've been eradicated. It's time to get rid of the ball quicker, tighten his mechanics, stop telegraphing passes, eliminate the poor decisions. Cutler has loads of talent, but that ability has yet to manifest itself the way the Bears were hoping when they traded for him in 2009.

This year isn't just a last chance, it's an ultimatum. The Bears are Jay Cutler's team now more than ever, and they're banking on that finally being a good thing.

• Why is Jermichael Finley so mad?