For over a decade, the elder Manning brother has been a Madden god. Let's destroy him.

Share All sharing options for: Breaking Madden: Peyton Manning and his offensive line of 160-pound twig-people

Peyton Manning might be the greatest quarterback in the history of football, and last week, the 37-year-old opened his season with one of the greatest single-game performances of all time. He passed for 462 yards and seven touchdowns without throwing a single interception. This week, let's try to break him.

Before simulating the Broncos' Week 2 matchup against the Giants in Madden 25, I decided to let Manning keep all his wideouts, as well as his running back committee of Ronnie Hillman, Knowshon Moreno and Montee Ball. I'm after a fate so much crueler than that, you see. I've replaced his five starting offensive lineman, as well as his tight end, with players I created. They are five feet tall, weigh 160 pounds, and possess ratings of zero in nearly every single skill category.

One of them, without doubt, had to be Robert "Bobert" Awful. You may remember Mr. Awful from the time I created him in NBA 2K12, placed him on the Lakers, gave him all of Kobe Bryant's minutes, and basically drove Kobe insane. Fortunately for our purposes, Awful is a multi-sport talent. 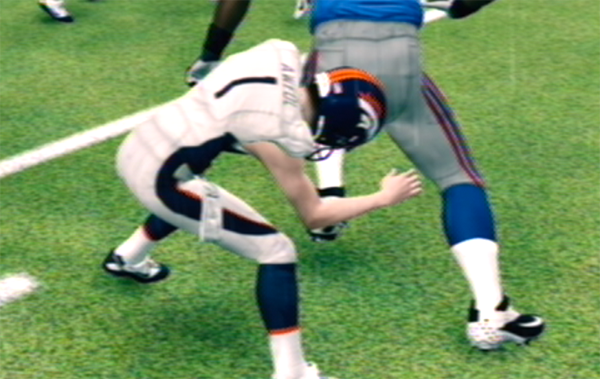 I could have simply made clones of Bobert Awful, but I decided it would be more fun to find the rest of my offensive line on Twitter.

if you'd like a horrible player named after you/your Twitter profile in a Madden experiment, please submit one crappy fact about yourself 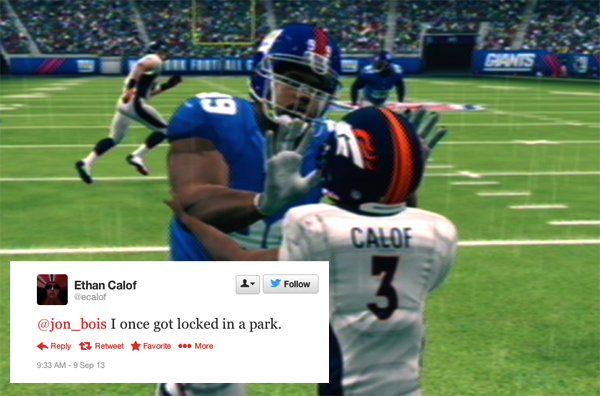 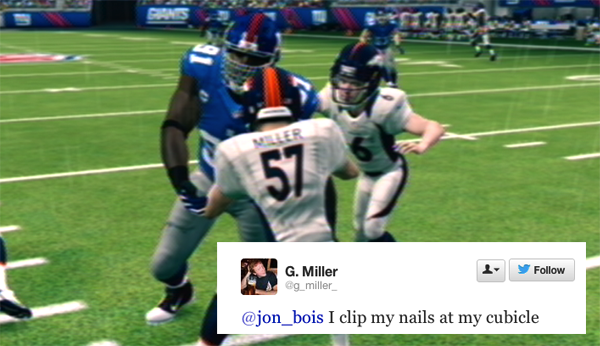 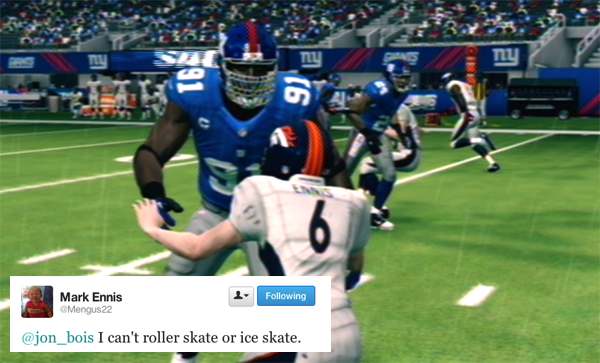 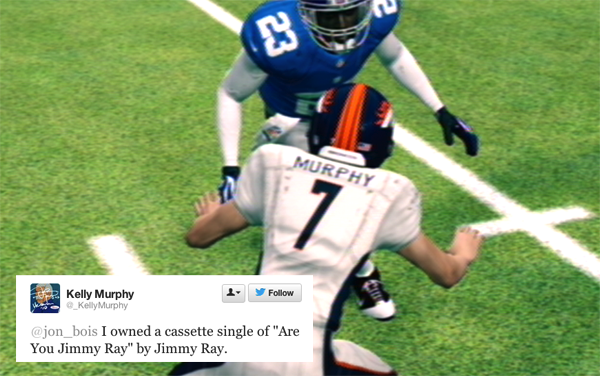 (If you want, you can go ahead and let this play throughout the rest of this piece. Please don't, though.) 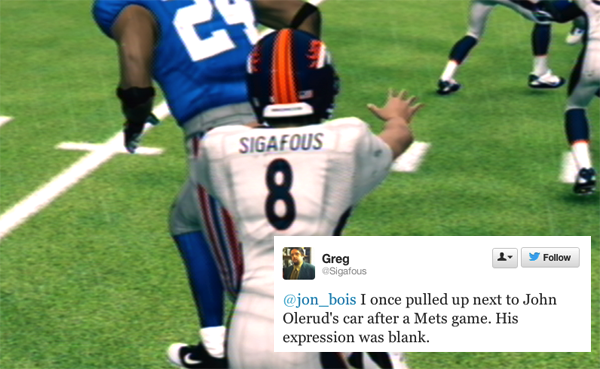 In addition to making all these folks five feet tall and 160 pounds -- the shortest and lightest figures possible -- I assigned them the following ratings:

They possess zero fortitude or strength of any sort. Think of them as 160-pound, poorly-constructed art deco end tables that are liable to topple over at any moment.

Madden 25 actually does allow particularly gifted players the ability to hurdle over someone else. These individuals possess absolutely no athleticism. Come to think of it, though, I kind of wish I had maxed out their Jumping ratings, because few things would be more beautiful than an O-line full of blockers who just jumped over the folks they were supposed to block.

Blocking is a sophisticated craft, and these folks possess zero understanding of it. Peyton Manning's offensive line is essentially a gaggle of wandering toddlers.

They have no real use for any of these abilities. This is just for good measure.

I don't know what this is. They are horrible at it.

I maxed out their ability to keep from getting injured. I need them on the field all game. They are crucial to my game plan.

With their Madden 25 default roster, the Denver Broncos boast an overall rating of 89, second-highest in the game. After releasing every offensive lineman I could and replacing them with my new friends on the depth chart, their rating dropped to a staggering 64, which is the worse than any other team by a long shot.

I should probably be jailed for this. Let's fire it up.

I want to establish something at the outset here: I played as the Giants the entire game. I am not responsible for any of the dumb stuff Denver did here. These computer-Broncos acted of their own volition.

In real life, Giants defensive end Jason Pierre-Paul is recovering from back surgery, and will probably not be 100 percent on Sunday. In the Madden universe, he is at full strength, and his overall rating of 96 makes him one of the most dangerous defensive players in the game. New York's defensive line is also bolstered by Pro Bowler Justin Tuck.

In order for the Broncos to overcome a horrifically outmatched and outsized O-line, they're really going to need to stick to the game plan. I have faith that they'll be able to execute the fundamentals and--

This, apparently, is what happens when you give an offensive lineman an Awareness rating of zero. That's our pal Robert Awful, displaying the sort of leadership that snaps collarbones in twain. As our own Jason Kirk pointed out to me, even if Mr. Awful is trying to clear the lane here, he does so far too early. Cullen Jenkins runs by him as Fireball Mario might run past a flower, and Manning is crushed near his own goal line.

Don't worry, though, because Bobert is out there skulking about. That half of the field has been successfully skulked. That's all taken care of. Good work, Bobert.

To establish the Giants as literal giants is rather low-hanging fruit, but, well ... 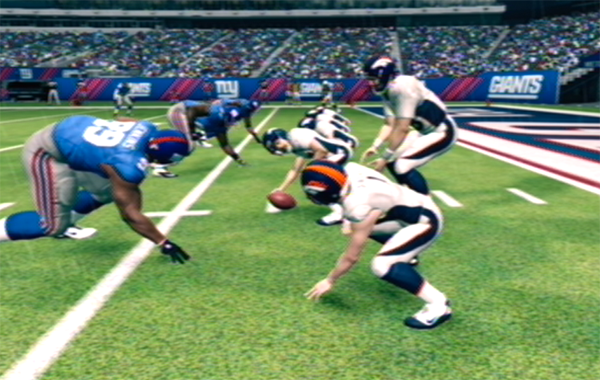 Manning was smart enough to take snaps out of the gun throughout most of the game; above, we see one of the few exceptions. Manning, meanwhile, stands so far above his line and has such an unhindered line of sight that he can see into the future. A terrible, dark future.

With that in mind, we can't really blame him for getting spooked.

If you've played much Madden over the years, you know how smart computer-Manning is. For many years, he was the only CPU quarterback who would run the hurry-up and call plays at the line. He would never try to force a ball into tight double-coverage unless something was terribly wrong.

We have taken one of the most impressive mainstays of this proud, decades-old franchise and snapped it over our knee. We have broken Madden. I am satisfied.

Manning's game was thrown for such a loop that he even tried to scramble a few times. This never worked, because Peyton Manning is a coat rack. In this analogy, the Giants defensive linemen are the peacoat, purse, and hat you drunkenly chuck at said coat rack as you stumble in at two in the morning.

To further the analogy, the Broncos' wide receivers are the uncooked bowl of rice and bacon that you find in the microwave the next morning. God, what a waste. What were you even trying to do?

Naturally, I sent the Giants on a lot of blitzes, but I had to rein myself in a little. If I ran Engage Eight a few times in a row, Manning would get wise, send Wes Welker on a shallow slant, and pick up an easy 20 yards. Even with this nightmare of an offensive line, Manning forced me to play balanced, smart football. Props for that.

He's had prouder moments that this one, though.

In the third quarter, Manning finally found himself in Giants territory after a David Wilson fumble. (Of course it was David Wilson. That's just mean.) When I sent the Giants on an all-out blitz, Manning didn't even try to leave the pocket before throwing the ball away. He just looked at the ocean of blue flooding his way, turned his head, and chucked the ball into the stands.

I want to stress that since Welker was running an in-route there, there wasn't even an eligible receiver on that half of the field. Manning was apparently happy to take the intentional-grounding penalty. He wanted none of this shit.

Neither, in fact, did his offensive linemen. You got him, Miller! KICK HIS ASS, MILLER

A STRANGER IS JUST A FRIEND YOU HAVEN'T MET YET, MILLER

Manning was hurried the entire game, but his offensive line hurt him most through penalties. You know how computer-Manning likes to throw off the defensive line by messing with the snap count? Well, it didn't work once on the Giants, but he scared the Hell out of his own guys. The Broncos were whistled for over 30 false starts. Mark Ennis was responsible for at least 10 of those.

Now, as outlined above, I did decide to create a terrible, super-small tight end. I didn't have to, but since the tight end was going to block half the time, I didn't want to leave any stone unturned.

Occasionally, Manning would make the mistake of actually trying to involve his tight end, Sigafous, into his passing attack. Remember: zero Awareness rating.

HUHHHH WHA HAPPEN. Sigafous was the target of a half-dozen throws, but I don't think he saw any of them.

So. Manning's O-line was broken, his passing attack was broken, and his style of play was broken. It was only a matter of time until he was broken of body.

This happened late in the third quarter. Manning could have stayed on the sidelines for the rest of the game and left his backup, Brock Osweiler, to carry his cross. After the next series, though, he trotted back on the field to take more punishment. He showed remarkable resilience and heart, and in that sense, he was truly a champion.

I couldn't believe Manning did so well. While seven sacks is a lot, I would have guessed I'd get to him at least 20 times. He was just too smart. He knew to get rid of the ball quickly, and with a few exceptions, he didn't panic.

With those NFL-record 235 penalty yards, though, we ensured that Manning's heroics were completely erased. That he poured his heart out on that field, only to see every bit of it negated through legal processes, is perhaps the cruelest fate of all.

Madden 25 hated me for this. This happens rather often when I do these things. Remember last time, when my Xbox was so dismayed by my nightmare Jaguars scenario that the controller literally threw itself off the table to get away? Remember when I created an NHL 13 scenario so bizarre that the game completely lost its shit and started sending headless players on the ice?

The computer didn't go quite as crazy this time around. But it was mad at me, and it let me know when the time came to show "Never Say Never Moment of the Game."

• The Post-Mortem explains why your team lost