Washington's quarterback isn't picking up where he left off. What happened to the RGIII we remember? Also, five games were decided in the last minute on Sunday. What does that tell us about those teams?

Share All sharing options for: NFL Debrief: What's the matter with RGIII?

Did you think that RGIII would step out onto the field in Week 1, decked out in a branded t-shirt not meeting NFL approval, and pick up exactly where he left off in 2012? I did. A part of me did, at least.

We like to assume that things don't change, especially the things that we remember most fondly. The lake where I grew up is now a tepid, bile-green cesspool churned by coked-up dentists in speedboats and surrounded by condos free from septic system regulations. It's not the lake where my dad and I caught buckets full of crappie before 11 a.m. It's not the same lake where a wide-eyed 18-year-old me once danced with forty-something ladies to Foreigner songs ... okay, it still kind of is that lake, but you get the point.

When you look at Griffin's overall stat line after two games, panic isn't the first word that comes to mind. He's got 649 passing yards, five touchdowns and a 63 percent completion rate. It's not on par with his final numbers for 2012, but it's not Chad Henne-esque.

But then you dig a little deeper. Those stats are nothing like the talented young quarterback who wowed us all with his football ability and trademarked motivational sayings.

He piled up most of his Week 1 stats with the Eagles sitting on a 33-7 lead. This week, 177 of his 320 yards came with the Packers leading 31-0. He threw all three of his touchdowns in garbage time.

Griffin's clearly not 100 percent, despite his protestations. Too many of his throws were coming off his back foot this week and last. That's causing him to throw it off target, and he's already got three picks. He threw a total of five interceptions last year. Five.

Washington's quarterback hasn't done much running this year, either. RGIII has nine carries through two games. That matches his opening-week total from last year and he had 20 runs through his first two weeks in 2012. Mike Shanahan and Co. aren't letting him run like he used to, either, which is another sign that he's not quite back to his 2012 version.

No read option from the man who made it a household phrase makes life easier for opposing defenses. Corners can play man on Washington's receivers. For defensive ends and linebackers, the threat of Alfred Morris slipping out one side or Griffin to the other is gone. It's also exposing Washington's roster limitations. The line isn't good enough to keep the pocket clear. The receiving depth isn't enough for secondaries to fear. And the defense is bleeding yards.

The bigger question here is whether or not Washington should sit RGIII. Kirk Cousins has done some solid work in replacement duty, but don't kid yourself into believing that he's on the same level as RGIII. It looks to this untrained eye, however, that Griffin has not recovered enough from his knee surgery in January to threaten teams with his arm and accuracy.

So what's going to happen in Washington? Probably nothing because Dan Snyder is a stubborn man (just ask Native Americans). The man who once spent $100 million on Albert Haynesworth doesn't strike me as a guy who'll sit his hero quarterback, regardless of the potential consequences.

Whatever Washington does decide to do, it will determine just how quickly we get to see the old RGIII again.

Still curious about why running backs are devalued in the NFL these days? Look at the injury report from Sunday. Maurice Jones-Drew, Eddie Lacy, Reggie Bush, Steven Jackson and Ray Rice all left their games with ailments of varying severity. With the exception of Lacy, a rookie second-round pick, those all happen to be pretty well-paid runners.

Running back careers are notoriously short and it makes Jackson's 10 seasons in the NFL that much more impressive. Why invest heavily in the position? Few teams do anymore. This isn't anything that hasn't been said repeated for the last five years. This week was just another reminder. 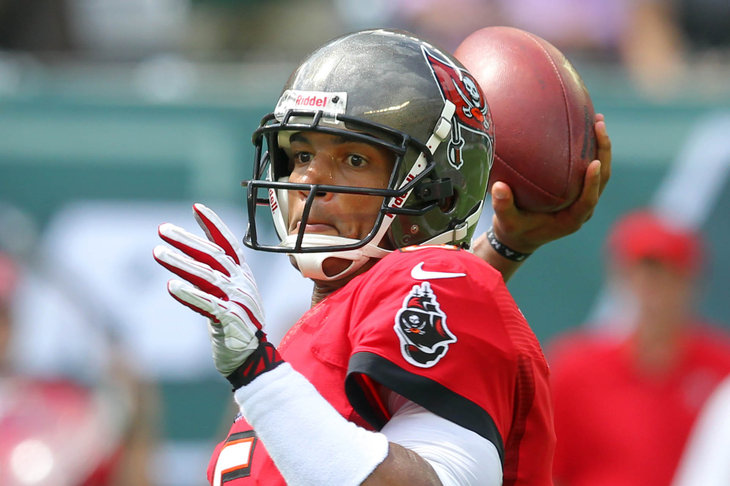 Inconsistent performances and recent controversy has the talented yet troubled quarterback likely losing his grip on a starting role.

Five games were decided at the wire. The Bears, Bills, Chargers, Saints and Texans all won this week with last-minute heroics. For Houston, it was the second week in a row that the game was decided on the very last play.

Late wins don't change the outlook for any of these teams. The Bears are a little better than we gave them credit for during the offseason when Marc Trestman was still a strange guy with mysterious connections to a foreign land (Canada, in this case). The Saints and the Bills beat teams in different states of disarray. San Diego took advantage of a terrible Philadelphia defense.

The strangest one of the bunch, to me, is Houston. New weapons on offense, a determined J.J. Watt and a healthy Brian Cushing made the Texans an easy candidate for a shot at the crown in a weak AFC. That's still possible, even likely, but fighting back to beat teams like the Chargers and Titans opens the door for some skepticism -- especially for a good team that's made a habit of being underwhelming at exactly the wrong time.

And what about the teams that lost in the final seconds of play? Philadelphia is a rebuilding team with enough veteran talent and new head coaches capable of surprising opponents, even if the season's results are still mostly preordained. Tennessee is now seeing the benefits of its post-Jeff Fisher retooling effort. The Vikings played well on the road against a talented team. The two teams on this list with major red flags are the Buccaneers and Panthers.

Tampa's best pass rusher from 2012 was on the field with his new team, the Seahawks, on Sunday. The Bucs let Michael Bennett walk because they felt like Da'Quan Bowers could replace him. Bowers still isn't starting. Worse, the head coach is doing everything he can to run Josh Freeman out of town. It's not that Greg Schiano needs to coddle the guy, but there's nothing wrong with trying to get the most out of a temporary solution. In fact, Schiano looks like the kind of coach headed for trouble with his players. They can't be happy about how Freeman's been treated and the locker room was reportedly unhappy about the captaincy voting. If you had your money on the Jets for the first spectacular meltdown of 2013, you may want to get a few bucks on the Bucs (heyooooo!) while you still can.

As for the Panthers, quality coaching continues to elude this team. The pairing of Cam Newton and Mike Shula might be the worst marriage of anyone not named Kardashian. Ron Rivera has lost two close ones to start the season. If things get ugly against the Giants next week, I wonder if he'll still be on the sidelines when Carolina comes back from its Week 4 bye.