It's time to see what Jets rookie Geno Smith is really made of. Let's make Mark Sanchez and Tim Tebow his wideouts, create an opposing secondary of seven-foot monsters, and cast him into a Madden 25 footballing nightmare.

I am a monster guy with a lot of stuff

Welcome to the end of my/this poem

The Jets' 2013 season is the one in which the Mark Sanchez era is finally crumbling into dust. We are witnessing the end of what has arguably been the worst four-year quarterback tenure in the history of football, and the ushering in of one Geno Smith.

In his NFL debut, Smith played half-decent football and drew a late-hit penalty in the closing seconds to set up a game-winning field goal. Things were much more terrible in Week 2, when he threw three fourth-quarter interceptions and fell to the Patriots, 13-10. It's difficult to gauge his value as an NFL quarterback from those two performances alone. That is why, for his Week 3 matchup, we shall cast him into Football Hell.

THE NATURE OF FOOTBALL HELL

In Football Hell, Geno Smith must prove his quarterbacking merit without ever handing off the ball or running. He will take every snap in an empty backfield, and he will not have the likes of Santonio Holmes to depend on. He must make do with this receiving corps: 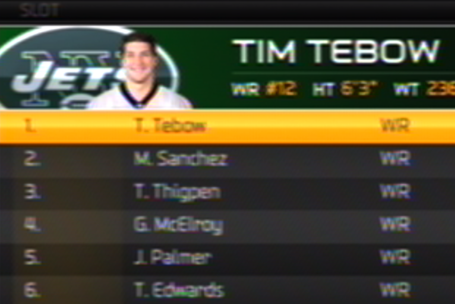 I did this at Spencer Hall's insistence. I told him that if the game actually allowed me to reassign quarterbacks as wide receivers, it was evidence that someone at Electronic Arts loathes the game of football on a personal level. Unbelievably, Madden 25 not only allowed me to do this, but EA had gone through the trouble of giving quarterbacks individualized receiving ratings that 99.9 percent of players would never, ever use.

So, as one does, I cut every wideout on the Jets' roster, switched Mark Sanchez and Greg McElroy to receivers, and signed fellow receivers Tim Tebow, Tyler Thigpen, Jordan Palmer and Trent Edwards.

This is what happened when Tim Tebow (Madden rating of 42) lined up as a receiver in real life.

And this is what happened in real life when Mark Sanchez (Madden rating of 28) lined up as a receiver in real life.

I know I'm cruel. I know that the scenarios I create in Madden are cruel. I just want you to know that Rex Ryan does terrible things, too, and that I am not the only monster in your world.

A wide receiver depth chart of no-gooder quarterbacks is certainly Hellish, but in my estimation, it was not Hellish enough. So I pulled up the Bills' defensive roster, released as many defensive backs as I could, and replaced them with seven-foot-tall, 280-pound monsters.

These players received 99 ratings in every relevant category -- speed, strength, awareness, pass defense, catching ability, etc. I also tweaked their AI settings to ensure that they would aggressively try to intercept the ball and deliver hard hits to whichever poor sucker happened to be holding it.

if you would like to be in the next Breaking Madden, please tell me something mean/anti-social you would do if you were seven feet tall

And once again, y'all did not disappoint. Please meet the new secondary of the Buffalo Bills: 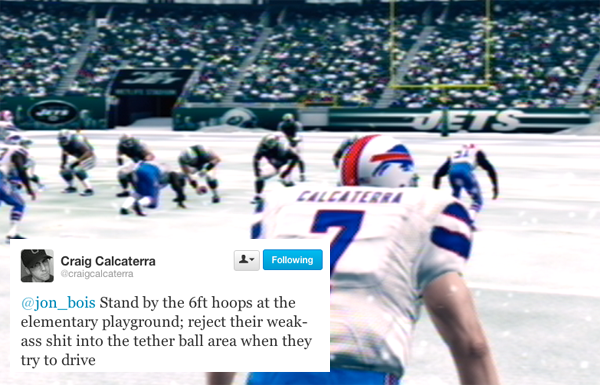 I have met Craig before, he is a cool dude, and I am terribly disappointed that he would go so mad with power. 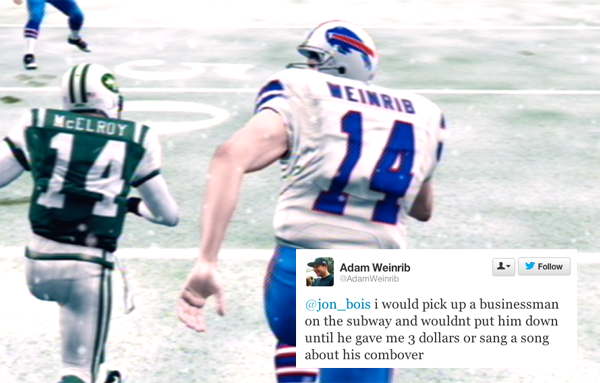 Since businessmen tend to make a lot of money, one would think they'd opt to pay the three dollars and be done with it. But people with lots of money often tend to be especially careful with it. I bet a solid third of them opt for the song. Since businessmen tend to be coal-hearted and uncreative, expect a song more concerned with rhyming properly than expressing any real feelings or painting you a picture. 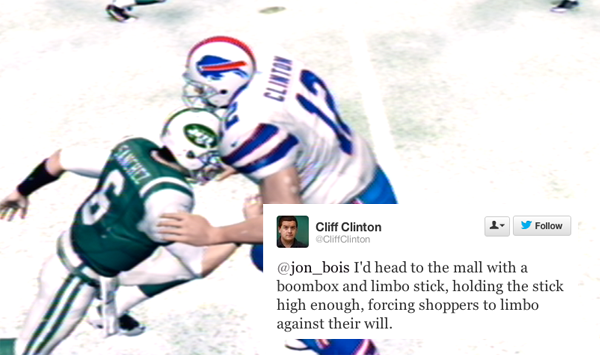 Well, I certainly think that's a ... hey. Hey Mark. Mark, honey, you need to run a different route. "Opponent's sternum" is not a route, sweetheart. 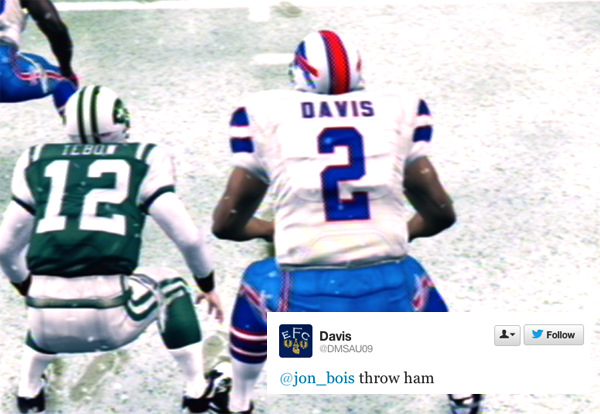 There is such a thing as great ham, but most ham, as the American understands it, sucks. There are a hundred different ways to make pork taste tremendous. Shooting five liters of IV salt into it is not one of them. The meat tastes like salty wet chicken, and more often than not the ham doesn't render properly, leaving you with a mouthful of slingshot rubber. I would hate it if someone threw it at me, and startled if that someone were seven feet tall. 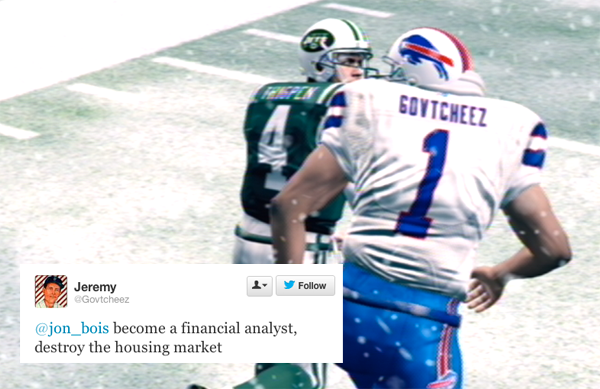 I set the game to two-player "coach mode," which meant I could call plays for both teams without controlling any of the players themselves. I wanted them to take full credit, and do terrible, wonderful things of their own accord.

Since this is not at all about the Bills' offense, I decided that upon receiving possession, they would punt the ball away on every first down. To ensure that the Jets never got a short field, I had them go for it on every fourth down.

I called a whole lot of Hail Marys for Geno Smith, as well as a scattering of empty-backfield slants and post routes. For the Bills, I experimented between man and zone, and was actually surprised to find that zone coverage made Smith's life more miserable.

Look at them running in tandem like that. It looks like a three-legged race. Mark Sanchez, Greg McElroy, et al couldn't find an inch of separation. Geno was sacked, having killed tons of time in the pocket in the vain hope that any of them could create any space at all.

Calcaterra was right there in the open field. There wasn't a Jets receiver within 20 yards of him. Geno threw the ball right at his face. He did this a lot, and it was rather fascinating to see what happens to a man when all viable options are taken from him.

As for that Bills secondary ... Lord have mercy. They were faster, bigger, and smarter than anyone else on the field. Perhaps you've heard that if an ant or spider were of the same proportions, only 10 feet tall, it couldn't stand up? We saw some of that here. A video game used to nudging six-foot humans along its digital axes was suddenly expected to understand how to operate a seven-foot body. There were some clumsy moments.

Clinton runs into not one, but two of his own teammates here. And since the Jets' receivers possessed a level of sentience roughly commensurate with frog legs twitching in butter, nobody was there to touch him, so he just got up and started running again.

Their clumsiness was easily forgiven, though, in light of their superhuman athleticism. I was curious to see what one of these guys would look like if I sent them after Geno, so I called for Weinrib to blitz. He didn't get past his man, and didn't have to.

BLAAAAAP. Remember: his jumping ability, like everything else, was a perfect 99 of 99. At its highest point, his hand was probably 14 feet off the ground.

This seems pretty fun to simulate, huh? Well, let me tell you something: this game took approximately five hours to play through. It's easy to understand why: the clock runs for perhaps five seconds, then stops, because every play is a pass, and passes are rarely completed. When the Bills receive possession on downs, they simply punt it away, and the clock stops again.

It took FOREVER. It was easily the least fun I've ever had playing a video game. I did this on Monday, and I couldn't help but reflect on the fact that Grand Theft Auto V was arriving at my house the following day. I'm going to continue this "Breaking Madden" series, certainly, but this may have been my farewell to playing this game as a purely recreational activity.

Which is fine, because this game hates me anyway. Hates me, and hates what I do. Look at this throw.

It might have to loop a couple times before you see it, but instead of going forward with his arm, that ball magically flings itself high in the air, behind Smith and into the stands. In that moment, Geno Smith became Lonnie Smith. It was unreal. I can offer no satisfying explanation.

There's no getting around this: Geno Smith and his Jets won the game, 14-7. He conquered Football Hell. By means and methods I struggle to explain, Smith was able to find Greg McElroy -- who had dropped nine passes -- for a 54-yard touchdown strike. I was fully expecting the Bills' secondary to score tons of points through pick-sixes, but despite breaking plenty of tackles, they couldn't return a single one of their 18 interceptions for a touchdown.

Let's not pretend, however, that this wasn't the ugliest quarterback win of all time.

Geno suffered through Hell, and staggered to the finish line with a 12.8 passer rating, but he won. In so doing, he makes me look like a fool.

And that's nothing new; I feel like a fool every day for one reason or another. What pierces me all the more is that I'm a fool on account of my own malicious avarice. I am not a simple fool or a gentle dummy, but a categorical jackass. I could not break him. I have lost.

Now, by this point it's understood that Madden 25, or this Xbox, or whatever, hates me. It throws out glitches in effort to slow the momentum of my lunacy. It doesn't, of course, because my dumbness charges forth like a freight train, but the important thing is that it tries.

Here are the Bills, running back a fumble for a touchdown, and here are the Jets, celebrating the score from the other team.

Notice that the ball carrier himself doesn't celebrate. It's just an obnoxiously beautiful moment. If you would like to join me in pursuit of more moments like these, and have an idea for a future "Breaking Madden" scenario, please let me know in the comments.