Getting GWAR to the Super Bowl

One man's quest to send the Scumdogs of the Universe and metal's goofiest stage show to the 2015 Super Bowl.

Share All sharing options for: Getting GWAR to the Super Bowl

It's tough to identify one single thing that exemplifies the NFL's hilarious/metastatic bloat. The mushroom clouds of unmotivated laughter rising over a half-dozen rectangular ex-players enthusing dimly through a three-hour studio show? A multiply facelifted Great Plains vanity case building a gaudy dome for his team that uses as much energy on game day as entire African nations? Yes and yes, but neither quite captures how grandiosely big the NFL has made itself. If anything does, it would be the Super Bowl halftime show.

If the only experience you'd had of live music was watching a Super Bowl halftime show, it would be hard to blame you for being terrified of live music. After two quarters of football, crews hastily assemble a massive stage and hordes of "fans" -- and who knows where these maniacally grinning actor-types come from, although circumstantial evidence certainly points to Sensory Deprivation Tanks Pumped With Nitrous Oxide -- stream towards it. It looks like one of those CGI zombie scenes from World War Z, except all the zombies are smiling too much.

At which point a pop star or multiple pop stars emerge and tear through a miniature set with all the harrowing sped-up energy of those panic attack mixes that play during cheerleading routines. Flashpots burst and smoke machines fart endlessly and strange faces get made during dance routines. Every year, regardless of who is performing, Joe Perry of Aerosmith emerges, shirtless and blaze-orange, and pantomimes a shitty guitar solo. All this takes about 15 minutes.

As with all things designed to appeal to every human, they wind up overstuffed and exhausting and strikingly un-human. (A counterpoint: the year that Prince performed. But Prince is, here as elsewhere, the exception that proves the rule.) Because the NFL is the NFL, this will never be any less so -- there will be no ruminative Leonard Cohen set, which is fine because the flashpots would frighten him and he's not a young man, and because it's hard to see how Joe Perry would fit into any of his songs. But if Super Bowl halftime shows are going to be all-out sensory assaults, they might as well be extremely loud and gross and well-costumed sensory assaults, featuring men dressed like grotesque mutant warriors. So, why hasn't the NFL had GWAR play the Super Bowl halftime show yet? 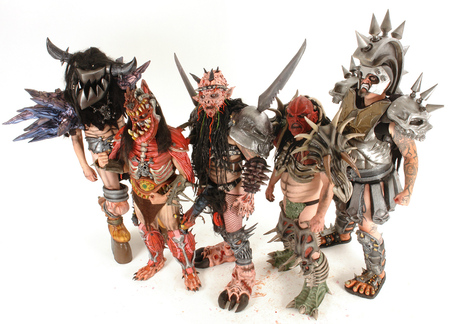 It's a question many have asked, but Jeff Cantrell, a video producer in Morehead, Kentucky, was the first to take it to Change.org. He has petitioned NFL Senior Vice President Greg Aiello to give GWAR the halftime slot at the 2015 Super Bowl. If I am correct in my understanding of how Change.org petitions work, reaching its 25,000 target would mean that GWAR is guaranteed the spot, and that they'd be allowed to play for at least an hour, and also that Roger Goodell would have to listen to GWAR's album This Toilet Earth in his car for a week. Like really listen to it.

Cantrell notes that GWAR has some connection with the NFL -- frontman Dave "Oderus Urungus" Brockie writes a NFL column for MetalSucks.com, and Raiders fans have been dressing like GWAR for years. He doesn't have to note that GWAR is perhaps the only band on earth whose show is already as all-around assaultive as the average halftime performance. There would probably need to be some changes to the usual GWAR Show Thing -- it's tough to see Goodell allowing Urungus' oversized stage penis, The Cuttlefish of Cthulu, to swing freely, at least without some sponsor logos on it. But it could work. And, as Cantrell sees it, it must work. "NFL must listen to the people," he writes in his Change.org text. "GWAR is more American than apple pie." (The emphasis is his.)

"You watch any major media event and it's a pageant," Cantrell says. "No risk involved." This would, it's safe to say, not be the case with a GWAR performance, and certainly not with the one that Cantrell imagines.

"The GWAR Super Bowl XLIX Half-Time Extravaganza will most certainly include bloody cheerleaders, something that spews Gatorade, and a marching band version of 'Saddam-A-Go-Go,'" he told me in an email. "These are things America needs to heal for the mental wounds of previous halftime affairs." So far, nearly 18,000 people agree with Cantrell on this, and he has gotten a promotional push from Oderus himself. "Oderus has yet to bless me with direct contact," Cantrell says. "However he has re-tweeted it several times and really, that's a lot to ask of a space mutant with such large hands."

Is it too much to hope that the NFL will listen to the fans who recognize the obvious affinity between Cartoonish Oversized Humanoids Slinging Outlandish, Irresponsible Violence and GWAR? Obviously, yes, it is. But this is no reason not to sign the petition. If it leads only as far as some junior VP explaining Scumdogs of the Universe to Roger Goodell, it will have been worth it.