What do we know after two weeks in the 2013 NFL season? This week's Notebook sheds some light on Andy Reid mixing things up in Kansas City, Mario Williams wreaking havoc and the unintended consequences, as displayed by the Niners' Eric Reid injury, of the way the game is now officiated.

Chiefs change it up

Who says you can't teach an old dog new tricks? Andy Reid, he of the "pass first, second and third" offense for all of his head coaching career in Philadelphia, started off the game against the Cowboys on Sunday with his quarterback, Alex Smith, in the pistol formation. It wasn't just for show, either, as Smith ended up gaining 4 yards on a read option.

Although Smith would only line up in the pistol one more time during the game, he did end up rushing for a team-high 57 yards on eight carries. Expect Reid to expand that wrinkle in his offense more and more as the season goes on, adding a lot of stress to any opposing defense. 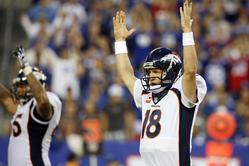 There's a shuffle at the top after a couple of dominating Week 2 performances.

They don't get nearly as much attention as other brothers-in-the-NFL duos, but Martellus and Michael Bennett both had big days on Sunday. Playing tight end for the Bears, Martellus shared the team lead for receptions with 7 catches for 76 yards against the division rival Vikings and added a pair of touchdowns -- including the game winner with just 16 ticks left on the clock in the 4th quarter.

Michael, playing defensive end for the Seahawks, had a big sack Sunday night in a rout of division rival San Francisco. The pair's teams are both 2-0 while both of their former teams are now 0-2. I am sure Michael would like to have one more thing in common with his brother this time next year: Can he follow in Martellus's footsteps by playing out a one-year deal in an attempt to cash in on a long-term contract? The Seahawks unfortunately don't face the Bears this year in the regular season so there will be no Bennett Bowl unless it happens in the playoffs.

As much as we talk about young pass rushers like Von Miller and Aldon Smith, keep an eye on Robert Quinn in St. Louis. He got off to a much slower start than Miller and Smith as a rookie three years ago and only notched 4 sacks that first season. Last year, however, he got the quarterback racked up for 10.5 sacks. This year he is off to a scorching hot start with 4 sacks in two games.

I've been trying to figure out who he reminds me of and then it hit me this week that he moves a lot like Cardinals outside linebacker John Abraham. If he can come close to the same kind of sustained productivity like Abraham, he should fare pretty well as John already has more that 100 sacks as a pro.

I am 100 percent behind the efforts to make the game safer, including penalizing guys for helmet-to-helmet hits. You will never eliminate all of those kinds of hits and many of them are incidental. But, with everything we know now about the long-term effects of concussions on the brain, it is worth trying to eliminate as many as possible of those hits that are intentional through penalties and fines.

There are always unintended consequences, however, and I believe one was on display this Sunday when 49ers safety Eric Reid hurt his neck while making a legal hit on a defenseless Seahawks wide receiver. In the slow-motion replay, it appears that in an effort to make sure the hit was, in fact, legal, Reid turned his head at the last minute and then made contact at a very awkward angle.

I stopped breathing for a second because I feared the worst: that he may have suffered a catastrophic spine or neck injury that would have left him paralyzed. I was finally able to exhale once he started moving his extremities, but that hit highlighted a fear I have had since the NFL announced these changes to how the game is called by the refs. There simply has to be some happy medium between penalizing obvious, intentional helmet-to-helmet hits and having defensive players put their own health at risk because they don't want to hurt their team and/or their own wallet.

I saw Titans rookie offensive guard Chance Warmack's comments about Texans All Pro defensive end J.J. Watt being "just a guy." I understand from reading the initial article with that quote that Warmack was responding to what appeared to be a question about whether or not Watt was "unstoppable" so I get why he responded the way he did.

However, seeing as how Watt turned Warmack into a big Burger King drive through where he could have it his way for most of the day Sunday, maybe a better choice of words was in order. At least Warmack got that encounter out of the way and won't have to see Watt again this year. Oh, wait...

Dez Bryant has transformed into one of the most exciting and explosive wide receivers in the game in just over two years as a pro. His ridiculous combination of size, speed, strength and athleticism was on full display Sunday against the Chiefs as he hauled in nine catches, several of them of the circus variety, for 141 yards and a touchdown. Bryant was also a huge reason why the Cowboys were in the game right up until the very end, but he has to be kicking himself for one of the few drops he's had in recent memory.

With about nine minutes left in the fourth quarter and the Cowboys trailing 17-13, Dez dropped a ball right in his hands while running up the sideline. He had already beaten the cornerback and, from all appearances, he was going to out run the safety to the end zone if he just makes the catch. For whatever reason, after making contested catch after contested catch all day, he just totally muffed that one. Considering the fact that the Cowboys went on to lose 17-16, that one has to sting a little.

I'm going to assume that Falcons safety William Moore is a big fan of wrestling like I am, because he executed a perfect Rock Bottom body slam on Rams tight end Mike McNeil after McNeil caught a pass in the flat in the second quarter.

That hit got me so hyped I paused for a minute expecting Moore to finish McNeil off with The People's Elbow!

Don't look now, but Super Mario is back!

Mario Williams broke the bank last year when he signed with the Buffalo Bills and, with the larger bank account, came higher expectations. Unfortunately, Williams got off to a slow start, ended up injuring his wrist, the team kept losing, and the criticisms started to mount. By midseason, it was almost as if everyone got together and decided Williams was a bust who would never live up to the enormous contract the Bills were foolish enough to give him.

Funny thing is that Williams still ended the season with 10.5 sacks, his highest sack output since the 2008 season.

It appears Williams is determined to come out of the gate balling this year. He has already racked up 4.5 sacks to go along with numerous other hurries after two games. He is even playing the run harder than he did last year. If "Super" Mario plays like this all season, the Bills just might sneak into the playoffs when it's all said and done.

The real problem with RGIII

It seems to me that some folks have it all wrong when it comes to RGIII after the first two weeks. It's obvious that his knee isn't 100 percent and he doesn't trust it to hold up just yet, but the notion that this is hurting his productivity simply because he can no longer run the ball misses the point.

The real problem that I see is that, because he either cannot or is not willing to really plant off his back foot to throw the ball, his accuracy isn't close to being what it was last year when he was healthy. Even if he wanted to run around with the ball more now, he wouldn't find much success. Until he shows defensive coordinators that he can get back to throwing the ball outside the numbers accurately, they are going to send the kitchen sink at him and and force him to make those throws with pressure in his face.

As the game went on Sunday, though -- particularly late in the third quarter and on into the fourth quarter -- it did appear that Griffin started to feel more comfortable planting to throw the ball with his surgically repaired knee.

If he has finally started to have confidence in his knee this week, then Washington fans don't have much to worry about. If he is back to trying to hurry up his throwing motion to throw off his front foot rather than his back foot, it might be time to let Kirk Cousins take over for a while.

• The Booth Review: What went wrong for the 49ers?