There's been a shake-up in the top 10 of our Week 4 NFL power rankings. Can any of the other undefeated teams challenge the Broncos for the top spot? At the bottom, the Jaguars finally have some competition for that dubious honor.

It's hard to argue that there's a better team right now than the Denver Broncos. The Seattle Seahawks have a pretty good case for that distinction, but nobody right now is doing what Peyton Manning's doing. However, Week 3 wasn't just about the icons and established brands staying on top.

Chicago remains undefeated, the Patriots are starting to find a rhythm and everybody apparently won that Trent Richardson trade between the Colts and Browns. There was more downward movement, too. The Giants plunged further into the abyss, and the Steelers look completely hopeless.

And what better way to sort it all out than with an arbitrarily ordered list of all 32 teams measured only by our vague definitions of power. As usual, we look forward to hearing your opinions on the matter, and invite you to share flowery language of agreement or raw vitriol in the comments.

It's just automatic for the Broncos right now. Football cyborg Peyton Manning is on pace for the best season of his career. Is he really going to finish the year with 64 touchdowns and 60,000 yards? No. Then you look at Denver's schedule and you wonder.

Like the Broncos, the Seahawks have played one quality opponent through three games this season. Some will guffaw at that, probably the same people who sneer at Guinness records. But both teams have dismantled those inferior opponents just like you would expect from such a mismatch. The defense got Chris Clemons back last week, and Bruce Irvin returns from his suspension in Week 5. Percy Harvin should be back by December, just in time for a playoff run.

Leave it to the Bucs to give Tom Brady and Co. a much-needed tune-up game. But let's save Greg Schiano's incompetence for another time. Kenbrell Thompkins and Aaron Dobson had a much better game. Rob Gronkowski comes back next week. The Patriots will be just fine.

"It's called the TrestCoast Offense," he said, flinging his cigarette at the assembled group of onlookers. A rejuvenated Jay Cutler aside, the Bears defense looks the same, even taking it upon themselves to score points this week. How much will they miss Henry Melton?

Only two teams in the NFC have allowed fewer points than the Saints. Not bad for a defense that was supposed be an afterthought this season. How long can they keep this up?

Don't look at the final score. Instead, notice Cincinnati's defense frustrating the Packers passing game early on, and then lending the offense a much-needed boost to give the team a quality win.

Baltimore's defense hasn't given up a touchdown since Week 1 against the Broncos, though they allowed six during the season opener. The Ravens had their way with the Texans this week, helping the offense overcome a week without Ray Rice.

Take away Duane Brown and the results aren't pretty. Matt Schaub completed 25 of 35 passes, but for a meager 5.5 yards per attempt. For a contender, the Texans feel underwhelming.

There's a lot to be positive about in Miami, despite Jeff Ireland signing a contract extension. Ryan Tannehill's playing well, the defense is better than advertised and the free agents are paying dividends. Just one red flag: Tannehill's been sacked a league-high 14 times through three games. That's not sustainable.

Indianapolis was a 10-point underdog in San Francisco this week. The Colts won by 20, and did it by running the football against last year's best run defense. Beating a quality opponent on the road is a good sign. We'll never doubt Jim Irsay's tweets again.

That was everything we thought Alex Smith would be on Thursday. It doesn't matter. Watch this defense play. Justin Houston leads the league with 7.5 sacks. Dontari Poe is wiping out interior linemen. Will they challenge Denver for the division title? Probably not, but I'm really looking forward to that pair of games.

What a mess. From running the ball to playing defense, the Niners seem to be unable to do what they're best at doing. A trip to St. Louis could be just what Jim Harbaugh's team needs, or a new low could be found. This is the ranker's dilemma: The 49ers are obviously a better team than the one on a two-game losing skid. However, the teams positioned above them on this list are all playing much better football right now.

What's wrong with the Packers? 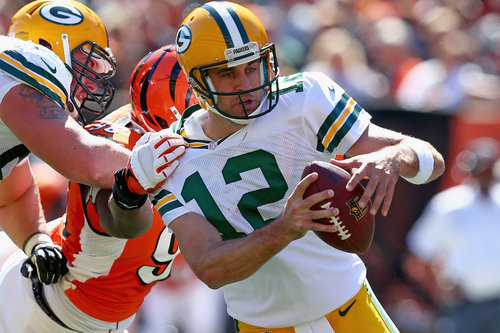 The Packers are struggling. Is it time to hit the panic button in Green Bay?

Green Bay started the season 1-2 last year. It managed to rebound, until running into the 49ers in the playoffs. This Packers team will rebound, too, but there are concerns here, especially with the pass rush.

Injured teams lose games on the road. Dropping one last week in Miami, a close one, isn't the end of the world. It is another reminder that this Falcons team is probably not going to win 13 games for the third time in four seasons.

Congrats, Jerry, you've got the best team in the NFC East. This might be Jason Garrett's best 8-8 season ever.

Turnovers gave the Lions a boost against Washington this week. Detroit now has a plus-3 turnover ratio for the season. A Week 4 game against the Bears has early implications for the NFC North standings.

Whatever Gregg Williams discovered about himself backpacking through the jungles of Southeast Asia, it's working. He's got this defense playing up to its ability, with more blitzes than offensive coordinators have answers.

This was the first week the Jets defense has allowed an opponent to reach 20 points. Geno Smith is playing well enough to hold off any meaningful chance of Mark Sanchez returning to the starting job. If things maintain, Rex Ryan might just survive beyond this season as head coach.

The Eagles went all out with a tribute to the past in Week 3. Donovan McNabb had his jersey retired, Andy Reid came back to town, and Michael Vick got hurt and turned the ball over three times.

Three games, three points. Three points separates the winner and the loser in all three of San Diego's games so far this season. Philip Rivers is playing his best football in years under Mike McCoy. The Chargers still aren't likely to win many, but can keep things interesting this season.

Ron Rivera will not be fired ... during the season, anyway. Carolina woke up in Week 3, thrashing the Giants. The offense didn't squander the defensive performance, finally. Mike Shula opened things up, too. Cam Newton averaged 8.26 yards per attempt, after hovering around six yards per attempt in his previous two games.

Jeff Fisher should win some major brownie points from grumpy columnists for his refusal to use the no-huddle offense unless his team is trying to dig its way out of a 20-point hole. It's the same offensive futility that's become synonymous with the Rams since the Greatest Show ended, but with much fancier parts nobody knows what to do with, like Tavon Austin. More concerning is a much-heralded defense allowing an average of almost 400 yards and 29 points per game.

Speaking of terrible, Jim Haslett continues to defy the odds, hanging on to a defensive coordinator job despite any reasonable evidence that he's the best fit. The defense has 42 missed tackles through three games, according to Pro Football Focus. Haslett's unit allowed an NFL-record 1,464 yards through three games, putting it on pace to shatter the record for yards allowed in a single season. RGIII still wants us to pin the team's struggles on him, so ... 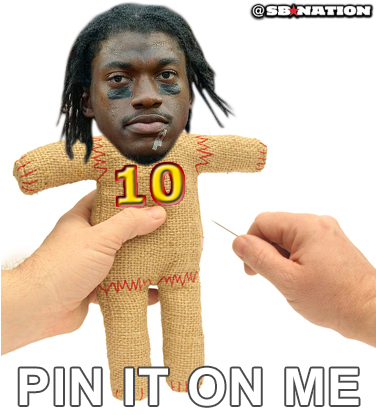 Christian Ponder's not having a great start to the year, but his fall back to Earth isn't the Vikings' biggest problem. The pass rush went over the hill with the defensive linemen.

I don't know how much longer Carson Palmer's going to last behind that offensive line, especially in Bruce Arians' pass-happy offense. He's been sacked nine times and has thrown four picks and three touchdowns so far this season. Arizona moves up by virtue of other teams, worse teams, sliding far in the rankings.

Tough week for E.J. Manuel. The rookie was sacked eight times by the Jets and completed just 45 percent of his passes. Worse, the Bills couldn't beat a Jets team that gave them an extra 168 yards via penalties. Buffalo's going to have its ups and downs this season, and this was one of those down days.

Poor Tom Coughlin. His Giants look hopeless. He doesn't even have the Jets in full circus mode to distract the press from Big Blue's free fall.

I wonder if Dan Rooney was alarmed at just how old his team looks now. Age isn't the only problem this team has; Todd Haley's only 46.

All they needed was Brian Hoyer and the threat of trading anyone who wouldn't get in line. Who knew it was so easy to build a winner!

Something positive about Terrelle Pryor. Sentence on the upside of having a high pick in the 2014 NFL Draft. There, we can just use that blurb for the Raiders' power ranking all season long.

Give it up for the Buccaneers' public relations office. It's doing some outstanding damage control work cleaning up behind Greg Schiano. The head coach makes a misstep, whether it's with Darrelle Revis or Josh Freeman, and 24 hours later some puffy profile appears. Nobody's buying it. If the CIA were still installing Cold War despots, Schiano wouldn't have to coach an NFL team.