NFL picks, Week 4: Bet on the NFC East for a change

Finally, a pair of NFC East teams have favorable matchups. The other two have friendly spreads to cover. Is it finally time to pay attention to the least important division of 2013? Those four games and the rest of the action from Week 4, picked for your pleasure.

Share All sharing options for: NFL picks, Week 4: Bet on the NFC East for a change

I cannot, I will not, encourage you to put any money down on these games or any other. I'm merely here to inform and entertain you. Hell, I'm too cheap to bet on games. Though I might have to rethink that based on last week's picks.

What happened last week? Oh, not much, just a nice little 12-3-1 record for my picks. The one is a push for the Titans' 20-17 win over the Chargers. It was a three-point spread. I picked Tennessee.

So here are this week's picks. Dig in. I'm going to go stare at my child's college fund and think about all the ways I can easily double it.

Thursday Night Football is basically unlovable. Even when it's not a lopsided match up or a game between two of the league's bottom feeders (Bills vs. Browns next week!), the game somehow finds a way to underwhelm. Both of these teams are supposed to be better than 1-2. One of these teams is going to rebound this week. They have to, if only by default. The short weeks are just too much for teams. And since it's a Thursday night game, you can bet on something like a sliced kick or some weird penalty you've never heard of being the difference in a 12-9 game.

Baltimore opened as six-point favorites. Even without Ray Rice, Dennis Pitta, etc., Buffalo's secondary could be just the thing Joe Flacco needs to get a rhythm with the rest of his supporting cast. The Bills are a more competitive team now, but E.J. Manuel versus that Ravens front seven looks like a nightmare.

Cincinnati bounced back from 30 unanswered points to beat the Packers last week, with a little help from the Packers. Brian Hoyer and the Browns are not Aaron Rodgers and the Packers. How many more weeks are left in the Brian Hoyer miracle story? Also, Sam Wyche's finest moment.

Jim Schwartz is 1-7 versus the Bears. His time in Detroit coincides perfectly with Jay Cutler's time in Chicago. The NFC North is the most lovable division in football right now.

Texans left tackle Duane Brown is a game-time decision this week. So is Andre Johnson. That has the potential for disaster against Seattle's front seven. Oh, and FOX has Chris Myers and Tim Ryan in the booth for this one. Speaking of Tim Ryan, remember last season when he left Calvin Johnson off the AP All-Pro ballot, despite Megatron's record-breaking season? It takes a lot to impress Tim Ryan, apparently.

Trap game? Maybe? I know I said last week to beware of big spreads, but big spreads against the Jaguars are justified this season.

A five-point spread seems low considering how both of these teams are playing right now. Dontari Poe looks unstoppable. Was it really worth giving up BBQ though? [lazy reference alert] He'll feast on Eli Manning this week. I can almost guarantee this pick. I can also guarantee that you'll be hearing more about an 0-4 Giants team than you will a 4-0 Chiefs team. And you'll love it, unless you're from Kansas City.

I bet the suits inside 345 Park Ave. are pleased to hear players talking about the NFL playing in London. Even Terry Bradshaw understands how ridiculous it is. But what about the pot o' gold Roger Goodell sees across the pond? Keep giving fans there games with the Rams (in 2012), the Jaguars and this battle of 0-4 teams, and that should eventually take care of the NFL's UK expansion plans.

Mike Glennon in a confused offense featuring more dropped passes than touchdowns against Arizona's secondary? It might not be too late for Josh Freeman after all. I'm holding out hope that a muffed call pits Greg Schiano and Bruce Arians mano y mano at midfield. 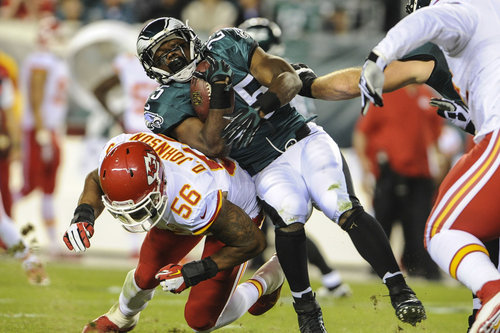 Former NFL defensive end Stephen White is back with his Notebook from Week 3. He takes a deep dive on the film from Chiefs-Eagles, and likes what he saw from both Cam Newton and Robert Griffin III.

Don't look now, but Jake Locker's kind of on fire. He's got 572 passing yards, three touchdowns and no interceptions hidden away in Tennessee's "run the ball, play tough defense" approach. He added a rushing touchdown of his own in last week's win over the Chargers. For the Jets, Geno Smith's six interceptions still don't feel like Mark Sanchez's body of work.

There's just something about that spread. It feels too big. Yes, the Broncos and Peyton Manning should feast on this Eagles defense. If Michael Vick can keep from turning into the turnover- and injury-prone version of himself, I'd feel good about Chip Kelly's offense flowing smoother and scoring some points. Let's assume we get good Vick this week. Denver will win, but good Vick and Kelly can cover the spread. Also worth noting is that the Eagles are 7-2 against a double-digit spread since 1998.

RGIII was throwing the ball better last week. That's a positive sign for Washington. Weirdly enough, giving this team a lead to protect might be the only thing capable of helping that defense. Remind me again why Jim Haslett still has a job? The Raiders are most likely starting Matt Flynn this week, so ...

The Cowboys look marginally competent this season, but a beatdown of the Rams only gets a team so much credit. The same can probably be said about the Chargers. This is a good chance for Dallas to put another game between itself and the rest of the NFC East. That could come in handy later in the year.

Atlanta lost last week, but it lost with an injury-riddled lineup and on a visit to the underrated Dolphins. There's no reason to panic about the Falcons, not yet. However, this is a tough draw. New England gets Rob Gronkowski back this week in all likelihood. It should be a shootout.

Don't look now, but the Dolphins are 3-0 -- and a convincing 3-0, too. And that includes two wins on the road this season. But this is a little tougher test, especially for Miami's defense, since Drew Brees scores points at will. The real question here is the Saints' defense. Rob Ryan's unit has been effective at controlling the passing game, limiting the last two opponents to fewer than 200 yards through the air. Of course, those last two opponents were the Buccaneers and Cardinals. If the Saints can find enough pass rush to add to Ryan Tannehill's disturbing, league-leading 14 sacks, New Orleans could run away with this one. I'm taking Miami to cover the seven-point spread, but I think the Saints win a close one.

• Week 4 picks: Can the Chiefs and Bears stay perfect?

• The Notebook: Trouble with Chip's system