Ah ha ha ha ha look at this guy! He is only the 45th-best quarterback in the world instead of the 10th-best! Ha ha ha ha he is horrible. 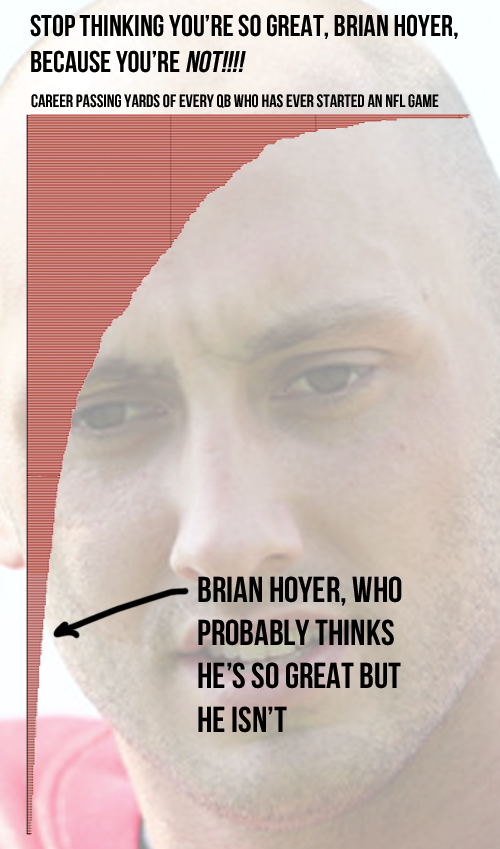 It must be that time of year again. Here we go again with Hoyer-mania. Now that Brian Hoyer has started a game for the Browns, the Hoyer-heads are out in force, and they just can't get enough of his 31-27 win over the Vikings. I don't know what's worse: the ego on this guy or this cumbersomely large wall calendar that is strapped to my wrist.

"I told the guys in the huddle, 'Let's just go win it right here,'" Hoyer said.

What a clown. I guess I would have a big head, too, if I had millions of clueless fans. Well, to your right is a clue (for the clueless fans).

That's right: of the 718 quarterbacks who have started an NFL game, Hoyer is only 488th. So maybe he should put down the celebration hat, party supplies, party food, drinks for parties, and other party miscellanea such as ribbons, noisemakers, fancy puppets, and good-times lanyards.

In this episode of Breaking Madden, we will put Mr. Hoyer in his place.

In a) starting Hoyer over proven veteran Jason Campbell and b) trading away stud back and first-round pick Trent Richardson, it was almost as though the Browns were attempting a real-life imitation of Breaking Madden. Somehow, despite a career backup at quarterback, a decimated running back depth chart, and a few sacks full of gravel at wide receiver, they pulled out a 31-27 win over the Vikings.

Hoyer passed for over 321 yards, matched three interceptions with three touchdowns, and finished with a not-abysmal 68.5 passer rating. Clearly, this was not enough of a challenge for him, so I overhauled not one, but two components of the Cleveland offense.

I. Replacing the Browns' receivers with kickers.

I cut every single wide receiver from the Browns' roster, signed an all-star cast of kickers throughout the NFL, and reassigned them as wide receivers. This is their new wide receiver depth chart:

I didn't forgot tight ends, either. The likes of Jordan Cameron have been replaced with:

Seeing these mens' overall ratings plummet from the 80s to the 20s was a delight, but if I'm being honest, I was most delighted to discover that Olindo Mare was still in the game. He is the only available player who was born in the 14th century.

These Madden Browns boast a running back committee even sadder than that of the real-life Browns. I cut every eligible running back, then created four RBs -- three halfbacks, one fullback -- who are seven feet tall and 160 pounds. They possess the lowest possible ratings in every category except for Injury, which I maxed out, because their ability to stay in the game is crucial to this experiment.

if you would like to be in the next Breaking Madden, please tell me the primary reason why you are not an NFL running back

By now it's become apparent that I have the funniest Twitter followers in the entire world. Several answered, "because I'm a woman." I hear y'all, friends, and at some point I want to wreck shit in Breaking Madden with a team of women. For this particular experiment, I have selected these four individuals: 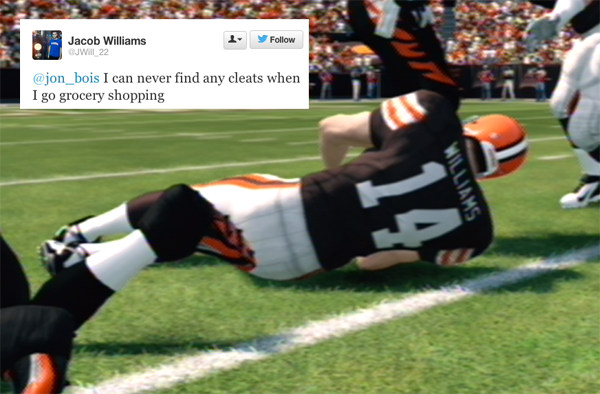 3. Independent coffee shop, but not so independent that they got, like, a consignment shop and shit

2. A dentist's office with a NO CLEATS sign prominently posted in the window

1. The middle of space

Change up your game, Jacob. 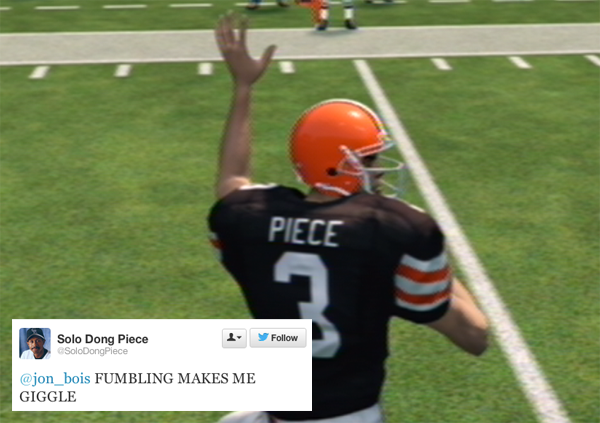 "Fumble" is an inherently funny word that's even funnier within his context. The vocabulary of football is very scientific and stiff, and sometimes feels like it was borrowed from a supply warehouse. Technically it's not a catch, but a "reception." It's the only sport that uses "attempt" as a noun. The field's a damn ruler.

And yet, they just haven't been able to class up the word "fumble" into something more dignified. "Fumble." The sound of the word evokes, I don't know, a chubby, cherub-cheeked suspendered man holding a pie and running into the forest to feed the animals. "There goes Fumble," they say in the opening line of a cautionary poem about not feeding wildlife. He probably gets eaten at the end, because fables are cruel to simple folk. 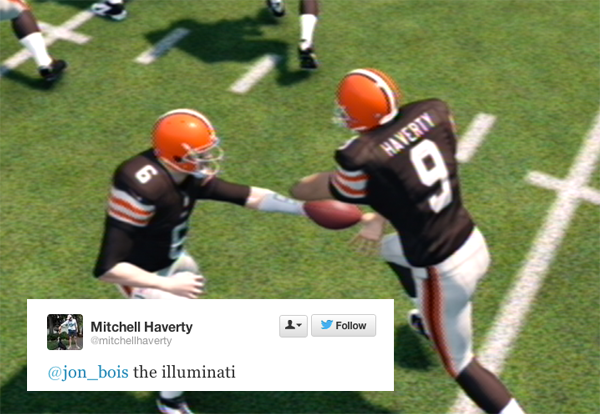 It's true. I'm sorry, Mitchell, but the Illuminati know best about these things. Well, except for the time they tried to get Dante Hall over as a running back. Turns out you need to be something more than "fast guy." 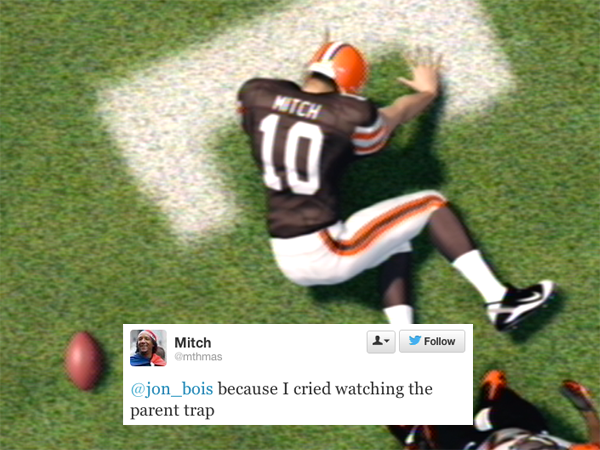 This is a Mitch-heavy week. That is fine, because 95 percent of people named Mitch live either in Cleveland or within the Domino's delivery area, which is how distance is measured in Ohio. Anyway. Mitch, you are wholly unqualified to be an NFL running back, but that doesn't make you any less of a person.

When I was five I cried at the end of Garfield: His 9 Lives. You know why? Because Garfield and Odie DIE IN THE END. See, as the title would suggest, the movie is split into nine chapters, each placing Garfield in a different point in history. In his eighth life, we see Jon adopt adorable kitten Garfield, and it's a heartwarming little story. That really should have been the ninth life, but the assholes who made this movie decided, "OK, let's bookend this tender moment by putting Future Garfield in a spaceship and killing him." It's formative, mis-shaping experiences like that one that keep me from dwelling too long on anything, which helps to explain why I can't get 800 words into a post about football and video games -- two of my favorite things -- without going on a tangent about goddang cartoons I hate and slandering quarterbacks who never asked for or deserved it. NEXT SLIDE.

This time around, I didn't actually take control of any player, because I wanted to sit back and leave the Browns entirely to their own broken devices. I also didn't alter the Bengals, their Madden opponent and Week 4 real-life opponent, in any way.

To keep the focus on the players, I didn't go wild with the play-calling. The Browns ran a solid balance of running and passing plays, most of which were governed by the "Ask Madden" function, and they punted on just about every fourth down.

So, I told you how excited I was to make Olindo Mare a wide receiver. This is why.

Here, he positions his hands as though he's expecting the ball to come from the sideline. Hoyer targeted him rather often, and Mare rewarded him with a team-worst six drops. He sort of looked like a guy who had never caught a football, but maybe saw a documentary about it once.

Unlike the Browns' make-believe running backs, the kickers did actually have football skills higher than zero. They could run routes, they went for balls in the air, et cetera. Still, they're kickers, and they spent most of the afternoon getting bullied by the secondary.

That probably wouldn't have been an interception if Stephen Gostkowski had attempted to catch with his hands instead of his forearms.

Not far into the game, Hoyer apparently became fed up with his receiver-kickers' ineffectiveness, and began to target his running backs with a lot of his throws. Unfortunately, they did him no favors either, because they are seven-foot sorrow-bots who regard the football as a wayward locust.

Mitch! The thing you're in is called a football stadium. The things you are wearing are called "football helmet," "football pads," and "football jersey." That shit ain't an accident, pal. That thing is named the thing like all of these other things. It is desirable to get and to have, Mitch.

He isn't even holding the ball. He's just allowing it to sit freely on his outstretched hand, which is oddly twisted around behind his back. Once the Madden ratings get into the single digits, they start stripping away the player's understanding of how human bodies operate. Maybe next year they'll let you dip into negative ratings, and players will just sit in wooden barrels and cry.

The Browns' offensive line did not do a particularly great job of protecting their running backs, and the kickers-turned-tight ends contributed precisely nothing to the effort. If you've ever wondered whether Billy Cundiff possessed a workable understanding of run blocking, here you go.

The Browns only sniffed the end zone once, and by that point they were down by three touchdowns. I went for it on fourth down, and Hoyer chucked the ball into triple coverage to end the drive. 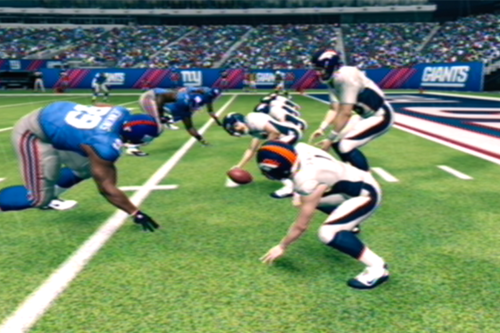 For the second consecutive week, the game has defied me. I completely purged the Browns of every player capable of doing things with a football, and yet he still managed to throw for over 400 yards. That isn't to say that he looked sharp, because he didn't. Those four interceptions could very well have been eight or nine. Every throw longer than 10 yards looked like a mortar and stayed in the air for half an hour.

This, frankly, was far better than I expected. Ratings aside, I think they might have benefited from being seven feet tall in some fashion.

Watching these Browns was a thoroughly miserable experience. Hoyer completed 46 passes, but his receivers dropped 23 more, which has to be an NFL record. He really wasn't that terrible. I cast him into football Hell, and he built a canoe to paddle across the lakes of eternal fire.

He hated it. Haaaaaaaated it. Look at this and tell me he's not faking an injury.

Randy lay there like a slug. It was his only defense. 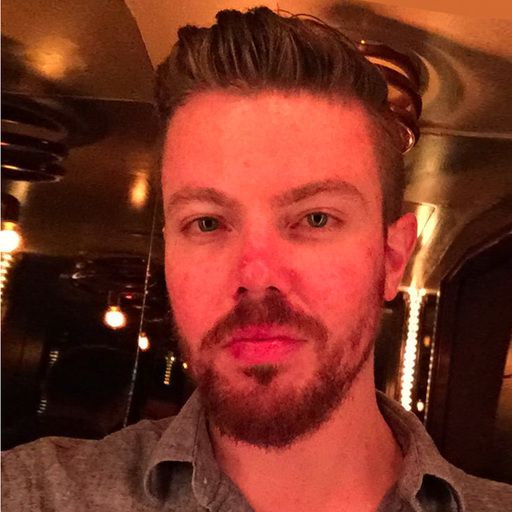 Jon has been with SB Nation since 2009. He is the author of the science fiction football story 17776, and producer of the documentary series Chart Party and Pretty Good.