As the rock-steady left tackle gets ready to make his 100th consecutive start this Sunday, we look back on what has changed in Cleveland in the six-plus years since his first snap.

Cleveland Browns offensive tackle Joe Thomas will be making his 100th career start when he suits up against the Cincinnati Bengals this Sunday. Not only has Thomas started every game for the Browns since they selected him with the third overall pick of the 2007 NFL Draft, he has yet to miss a single play. The six-time Pro Bowler and three-time First Team All-Pro selection has been on the field for 6,054 consecutive snaps since August 11 of his rookie year.

Thomas has been a pillar of consistency at his left tackle spot while  the Browns organization itself has been anything but. To commemorate his 100th start, we thought it fitting to quantify the awfulness that is Browns football by looking back on what else has transpired in Cleveland in the six-plus years since Thomas took his first snap.

Enjoy. Unless you're a Browns fan. In that case, you may want to have a drink on hand for this.

Thomas has protected 11 quarterbacks in his time in Cleveland, a hodgepodge of washed up veterans, draft day busts and nobodies (Thaddeus Lewis? Even Thomas doesn't know who Thaddeus Lewis is).

Frye, Dorsey, Delhomme and Lewis are no longer on active NFL rosters. Only two of the the 11 were 3,000-yard passers while with the Browns: Anderson in 2007 and Weeden in '12.

Does Brian Hoyer deserve to keep the starting job? 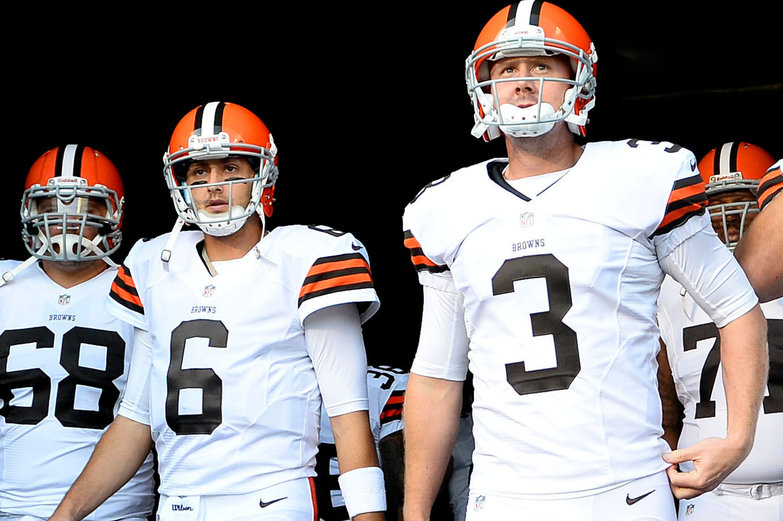 With Brandon Weeden still out with an injured thumb, Hoyer will step into the Browns' starting role again in Week 4. But has Hoyer done enough to hold onto the job after Weeden returns?

Four head coaches have tried vainly to right the Browns' ship since 2007. As an NFL player, Thomas hasn't had the same head coach for more than two consecutive seasons.

As tumultuous as the head job has been, the turnover for Thomas's offensive coordinators have been even more ridiculous. In seven seasons with the Browns, he's had an astounding six different OCs.

Even the front office has been a carousal of moving parts.

Adding to the front office turmoil, majority owner Jimmy Haslam, who bought the team during Thomas's sixth year, is currently embroiled in a federal investigation into his truck stop company, Pilot Flying J, which could force him to give up the team.

Since 2007, the Browns have gone a head-shaking 34-65, a number that includes their 1-2 start to 2013. Thomas has experienced just one winning season in Cleveland, when the team went 10-6 his rookie year. They still managed to miss the playoffs that year, however -- a feat they've repeated every season since.

The team has consistently fielded one of the worst offenses in the league, finishing the last six seasons at an average rank of 26th in the league in total offense. They've finished 29th or worse in four of those seasons and don't look to be on a path to turn things around in 2013 -- they currently sit at 26th through three weeks.

Trade rumors began swirling around Thomas in the wake of the Trent Richardson trade last week and the tackle admitted himself that "we're all on the trading block." Fortunately for Browns fans, it seems the team had the sense to turn inquiring teams around.

For the time being, anyways, it seems at least one thing will stay consistent in Cleveland.

• Week 4 picks: Can the Chiefs, Bears stay perfect? | Picks against the spread

• The Notebook: Trouble with Chip's system