The Falcons are now 1-3 thanks to more red zone misfires. Greg Schiano got his quarterback, but it wasn't enough to get past himself this week. Which undefeated team is likely to stay that way, for a little longer anyway?

Okay, picking the Broncos to win the AFC this year is like filling the square with a star in it on you bingo card, a freebie. Picking the Falcons as the other Super Bowl team, in hindsight, looks really dumb. (Preseason NFL picks are here). Atlanta's showing in a 30-23 loss to the Patriots was not championship quality. Unfortunately for the Falcons, it was an accurate representation of why the team is 1-3 on the season. 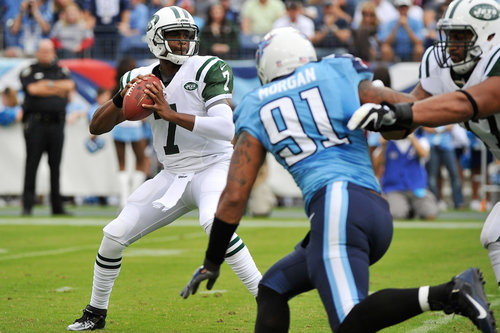 There were turnovers, a butt fumble and a highlight reel filled with hopelessness as the Jets we all expected returned to the field this week.

In the second quarter, Matt Ryan threw awkwardly on fourth-and-two, missing a wide open Roddy White in the end zone. The Falcons pressed the Patriots in the fourth quarter. Ryan threw what would have been the game-tying pass to White in the end zone with 41 seconds left. Aqib Talib went up with White, getting his hand on the ball to knock it away. Why he was throwing to a hobbled receiver with the opponent's best corner on him is another discussion.

Ryan's off-balance misfire to White in the second quarter highlighted his struggles when pressured this season. Prior to Sunday's game, he had just two interceptions and five sacks to show for the 56 dropbacks where opponents have pressured him. Injuries on the offensive line aren't helping things.

Mike Smith promised to address the red zone issue after last week's loss to the Dolphins. He obviously still has some work to do, but he's running out of time. Since 1990, only 22 of 258 teams that started the season 1-3 ended up making the playoffs.

Greg Schiano got his first big win of the season this week, but it wasn't on the field. He finally managed to depose quarterback Josh Freeman after nine months of awkwardly handling the situation. Deserved or not -- there's no way around the fact that Freeman was not playing well -- Mike Glennon didn't have what it takes to overcome Schiano's ham-fisted approach to coaching.

Tampa Bay had a 10-0 lead to start the fourth quarter. It should have been more than enough to hold off the struggling Cardinals. Instead, Schiano put the game in the hands of his rookie quarterback, calling for him to throw it when all they needed to do was lean on Doug Martin. Glennon threw a pair of interceptions that helped the Cardinals score 13 points over the last 11 minutes of the game.

And then there were the penalties. Three of them in the fourth quarter. Dashon Goldson gave the Cardinals a big hand with a personal foul that helped give the Cardinals a chip shot field goal for the game-winner. It looked familiar to Lavonte David's late penalty against the Jets that cost Tampa Bay a win in Week 1.

Freeman's not the only one who needs to go if the Buccaneers ever hope to end the blackouts.

Schiano put his signature on the loss by crashing the Arizona victory formation.

Schiano and the Bucs spent the better part of the week throwing Freeman under the bus. A day after he was benched for Glennon, "anonymous" reports surfaced on the NFL Network about Freeman missing team meetings. It was a valiant public relations effort.

An offseason of spending on free agents, a new quarterback and a PR blitz did nothing to address the Bucaneers' biggest weakness: leadership. Freeman's not the only one who needs to go if the Buccaneers ever hope to end the blackouts.

Say it ain't so Joe

Expectations are tough to manage when you a) win a Super Bowl, b) play great doing it, and c) sign a $120 million contract extension. Flacco threw a career-high (low?) five picks against a Buffalo secondary strapped for starters. After four games, he's one pace to throw 28 interceptions this season.

But there's some good news, kind of: Flacco's also on pace to top 4,000 passing yards for the first time in his career. He may not have a choice. This week, the Ravens trailed 20-7 at the half. Flacco thew the ball 28 times in the second half and the Ravens only ran the ball twice over the last two quarters.

It very nearly worked. Baltimore closed the gap to just three-points by the end of the game.

A thin Ravens offense gets some of the blame for Flacco's struggles. He has Torrey Smith and a bunch of guys you've never heard of and will never hear of again to throw passes to this season. But the Ravens still have Ray Rice and Bernard Pierce. Those two were penciled out of the game plan well before things got out of hand for the Ravens.

Nobody's surprised that Flacco's struggling given the loss of Boldin and Pitta. But Jim Caldwell deserves a little scrutiny here too. At some point, being an improvement over Cam Cameron isn't enough to get you by.

Speaking of all the interceptions, let's survey the damage by the quarterbacks with multiple picks.

Jay Cutler, 3 INT, 1 fumble - We love the TrestCoast offense, but the gunslinger gods demand sacrifice from time to time.

Matt Schaub, 2 INT - Fans are burning replica jerseys in the parking lot like he's an Uncle Sam effigy in some country that's had to suffer through terrible Cold War interference. He has three pick-sixes in three games now. And the Texans offense was supposed to be better this year. Watch out, Kubiak, the embassy's about to get stormed.

E.J. Manuel, 2 INT, 1 fumble - The Bills rookie only had one interceptions before this game.

Carson Palmer, 2 INT - The veteran quarterback continues to struggle with his decision-making. To be fair, he was traded to Oakland and to Arizona, so his worst decisions aren't really his fault.

Geno Smith, 2 INT, 2 fumbles - Can't let Mark Sanchez be the only one defining a franchise with ass-induced fumbles.

Alex Smith, 2 INT - When you turn the ball over to the Giants, does anyone notice?

The NFL doesn't keep stats for men with beards. But we don't need the splits to know that a rich, full beard can give players an edge over the competition. Sean McGrath caught five passes for 64 yards and a touchdown on Sunday, helping the Chiefs move to a stupefying 4-0 on the season.

Never doubt the internet. The Bearded One, everybody http://t.co/UJU4BWQ1f1 pic.twitter.com/FutWJ698Ss

Some other bearded favorites: 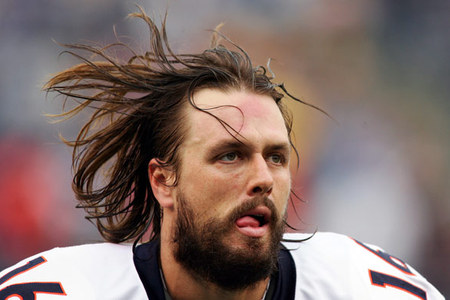 Denver Broncos - At this point in the season, you should only get like half a win for beating the NFC East. Even so, the Broncos would get the other half point back on style points, explosive style points. Denver has now won 15 regular season games in a row -- all by seven points or more. This team is on pace to be more prolific than the 2007 Patriots, steaming toward a total of 716 points this season. Yes, that's the same Patriots team that finished 16-0 in the regular season.

Kansas City Chiefs - Dunta Robinson might be a problem whenever the Chiefs do meet up with the Broncos come Week 11. Nevertheless, that unit could give Denver its next real test. Oh, hey, Alex Smith, you keep doing whatever it is you're doing.

Seattle Seahawks - Seattle dug its way out of a 14-point deficit in the fourth quarter. Richard Sherman continues his role as the league's best troll cornerback, forcing Texans fans to burn jerseys in the parking lot.

New England Patriots - It only looks like the Patriots are going to get better. Gronk is coming back as soon as his father lets him. Danny Amendola surely has a game or two left in him before the season ends. This is really about the defense though. Aqib Talib had his moment on the national stage Sunday night, thwarting Matt Ryan exactly when he could least afford to be thwarted.

On Monday night, either the Dolphins or Saints will be 4-0. I almost feel like rooting for the Saints just to beef up the NFC representation on this list.

New York Giants - Would Eli Manning be better off without an offensive line at this point?

Tampa Bay Buccaneers - Let's all drive off the cliff with Greg Schiano!

Jacksonville Jaguars - It's gonna be awhile. Or is it? The Jags get the Rams next week.

Football fans in the UK probably weren't expecting much from the winless Steelers and the winless Vikings playing the first of two NFL games in London this season. Nobody in the USA was either. But Adrian Peterson enlivened things with 140 rushing yards and a pair of touchdowns.

It was his best game of the season so far, and the second time this year he reached triple digits for rushing yards. Peterson didn't reach the 100-yard mark until the fourth week of the season last year, the only time he did it in his first six games. Peterson is averaging 105.3 yards per game this season. At this point last year, he was averaging just 83 yards per game.