What's the matter with the NFC East?

A frontline report from the NFL's most dreadful division.

Share All sharing options for: What's the matter with the NFC East?

The SB Nation NFC East Preview declared that it was high time for the division to distance itself from mediocrity.

Boy, has it ever. 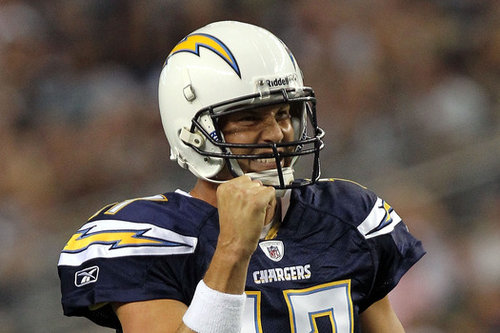 Just when the world was ready to write off Philip Rivers, he's responded with a rebound season in 2013, highlighted by a Week 4 takedown of the Cowboys. What's going on?

Mediocrity is a fond memory and faint aspiration for the NFL's most wretched division, as it has collectively plummeted past mediocrity like a pre-bailout era stockbroker. No one is quite sure how deep this dive will go, but it may involve a bathysphere and those fish that can make their own light.

Taking stock after one of the division's all-time shoddiest Sundays, there IS some good news for the NFC East:

- At no point on Sunday did the Earth crash into the sun.

- There are no known staph outbreaks in NFC East team locker rooms.

- There are, very possibly, at least two teams in the rest of the league that are worse than anyone the East has to offer.

- No single NFC East player turned his entire city permanently against him, as Matt Schaub likely did with his appalling pick-six to Richard Sherman.

The bad news for the NFC East:

- Pretty much everything else.

Throw on one of Walter White's old hazmat suits and let's try to endure the noxious fumes of a team-by-team breakdown, shall we?

Still, we're gonna have to take what good news we can find in this deal, so we can't bag too hard on the 'Skins the morning after they got off the schneid. And the Redskins DID manage some nice moments in this one. Rookie corner David Amerson's touchdown on a stupefying Matt Flynn throw over the middle was a respite for a beleaguered secondary. The pressure from Washington's defensive front was constant, reflecting well on OLBs Brian Orakpo and Ryan Kerrigan, while showing the kind of deluge Raiders fans can expect when opposing rushers aren't solely concerned with keeping Terrelle Pryor in the pocket.

Washington's pistol run game looked crisper, and some early keeps and bootlegs by RGIII introduced the kind of defensive hesitation that so often turned into bad-angle hits and broken tackles for Alfred Morris.

Of course, any hope the Redskins have of contending -- even in the league's most dire division -- comes down to Griffin's return to form. In that respect, Sunday's game was something of a mixed bag.

The NFC East's QB pedigrees will help it manage better weeks than the one it just had.

On the plus side, Griffin stepped into his first first-half pocket pass of the season on a second-quarter slant to Pierre Garcon. He looked more comfortable throwing on the move, and a bootleg strike to Leonard Hankerson would have fit seamlessly into the 2012 RGIII highlight reel. He even had a couple of vintage-ish moments on the ground, including a nice third-quarter option keep that was erased by a hold and a sweet escape from pressure that culminated in a sideline throw to Helu.

On the NFC East-ier side of the ledger, Griffin is still completely hit-or-miss in the pocket. It's an absolute guessing game whether he'll step into a throw or sail one off his back foot, and his response to middle blitzes still resembles wide-eyed panic. (Of course, it is possible that his eyes are just bugging in shock that Shanahan STILL hasn't called a running back screen to punish middle pressure). He seems to get a little more self-assured on his runs each week, but an amateurish string-himself-out moment in the first quarter showed that his keep game still has a long way to go.

Unfortunately for the Redskins, "long way to go" is the kindest description for what's happening in their defensive backfield. The stats didn't look bad in this one, but no Matt Flynn start for the remainder of this season is going to yield 7 yards per pass attempt with the Raiders' travesty of an OL. Washington's safeties continued to evince pure bafflement on simple assignments, and the shoddy tackling on Ra-Plod Rashad Jennings may have had inebriated Raiders fans thinking Marcus Allen was back in the building.

Washington gets a well-timed bye week to feel good about its win, continue to get RGIII's head right with his knee and watch Denver eviscerate Dallas to ensure that the Redskins are no more than one win out of first in Week 6. But unless they use some DC connections to airlift in help for their back seven, they'll be involved in way too many shootouts that they're ill-equipped to win.

Would you believe it gets worse from here?

Fractals are never-ending patterns created by repeating a simple process over and over in an ongoing feedback loop. Dallas' come-from-ahead loss to a mediocre Chargers team* was a perfect fractal of the one step forward, one step back, fill a hole and open another, load for bear and then blow your own foot off approach that's yielded a 130-130 record for the Cowboys since 1997.

After a Sean Lee interception return staked Dallas to an 11-point lead, the team never scored again. Against the league's 32nd-ranked secondary. With Dez M.F. Bryant on the field the entire time. As is immutably required by the Cowboys' pattern, they mixed in a little failure from a lot of places.

A last-gasp drive in the fourth was snuffed when rookie receiver Terrance Williams showed mind-bendingly poor awareness of his position on the field and started stretching the ball out from the 3-yard line, handing the Chargers a game-icing fumble.

Dallas' offense might have had even more opportunities for foot shots had the defense been able to get off the field.

In surrendering four straight scores, the Dallas defenders showed their offensive counterparts that they too had mastered the "spread the fail around" strategy.

Former sixth overall pick Morris Claiborne was consistently abused on short and intermediate throws to rookie Keenan Allen -- and just about anyone else San Diego sent his way.

Dallas' star linebacker duo of Bruce Carter and Sean Lee -- the guys whose coverage skills the ENTIRE DEFENSIVE SCHEME was selected to highlight -- got roasted by Antonio Gates, 33, and Danny Woodhead, who is Danny Woodhead.

Dallas' safeties have to play with their heels almost planted on the goal line to not get beat deep, and are useless in filling the intermediate voids that can kill a Cover 2.

And after some early successes, Dallas' pass rushers -- including future Hall of Famer DeMarcus Ware -- spent the second half on a milk carton against the Chargers' lack-tastic OL.

One interesting thing about the Cowboys' pattern over the last few seasons has been their tendency to beat top-end teams when all their talent rows in the same direction, as they did with the undefeated Colts in '06 and the 13-0 Saints in 2009. Dallas could pull off a similar upset against Denver ... and then blow its own foot off a week later en route to another 8-8 campaign.

The pattern is undeniable.

While Dallas is locked in the same old dance, the Eagles are at least keeping things fresh. As predicted, the frenetic pace of Chip Kelly's offense is generating unprecedented scoring opportunities. Unfortunately, those scoring opportunities are coming for the other team.

The Eagles were simply trussed up and skinned like deer by orange-clad hunters on Sunday. A blow-by-blow recounting would simply be cruel. Instead, let's look at the big picture for this team:

The Eagles still possess one of the league's most efficient ground games, and this will hold true as long as the OL stays athletic, Shady McCoy stays healthy and Mike Vick remains at QB.

The Eagles simply cannot consistently execute on the intermediate and deeper passes that NFL teams HAVE to hit in order to survive. This will also hold true as long as Mike Vick remains at QB.

The Eagles are going to get annihilated in the secondary as long as they keep trotting out ... one of the NFL's worst secondaries. And the annihilation is going to be even more pronounced if the Eagles' offense keeps up its headlong sprint to get the ball back to its opponents as quickly as possible.

Facts are facts -- Kelly isn't going to simply chuck his whole offense and start running I-formation off tackle all day just to try to save an unsalvageable defense. He may need to make some tough decisions at QB, though, where Nick Foles or even Matt Barkley could provide a keep-them-honest threat on read-option keepers while completing throws at a rate that can sustain more drives. And throw they must, because even "run-based and fast-paced" still isn't fast enough to keep up with the avalanche of points the Eagles' dire defense will surrender.

Things are never quite as bad as they look after "one of those games," but it's now incumbent on Kelly to get a strong performance from his squad to forestall the credibility questions that can crop up at any time for an offbeat college coach.

Fortunately for Chip, the Giants are up next.

What looked like a solid chance to capture an up-for-grabs NFC East has swiftly morphed into a death march for the Giants. While they are no strangers to roaring back from the NY media's "the team has quit on Coughlin" stories, there's a real air of death and desperation around this team with few answers on the horizon.

The list of "things New York does well" starts and ends with Manning-to-Cruz on offense. The rest of the offense has been a cavalcade of brutal Hakeem Nicks drops, runners treating the ball like it's covered in Ebola, aggressively awful pass blocking and the re-animated corpse of Brandon Jacobs staggering around, pursued by villagers with torches and pitchforks. Eli Manning, so good in the face of pressure two seasons ago, has morphed into a vending machine that dispenses fumbles and INTs when defenders come calling.

The defense can give itself a smiley sticker for "stops runs between the guards," but it's doo-doo scratch 'n sniffs down the entire rest of the report card. The fabled "two-seven off-suit" pass rush package has several guys failing the jersey test -- if you asked them right after the game what jersey number the opposing QB wore, they'd have to check the program to give you the right answer. That has set an already shaky back seven up for merciless pillaging, with guys like Terrell Thomas, Antrel Rolle and Keith Rivers taking the brunt of the damage.

On Sunday, they were picked and pecked to death by Lt. Colonel Checkdown (he was long ago promoted from Captain) on hitches and slants before suffering the ultimate indignity of a TD pass to Dwayne Bowe that, at 34 yards, could be Alex Smith's longest downfield pass this season.

It SEEMS like there's too much talent on this team for these kinds of results to continue, but talent is as talent does. Right now, the Giants' pedigree is a flimsy defense against the charge that they are one of the league's worst teams.

You can't go TOO far overboard at the quarter pole of the season, but it's already looking like 8-8 will be enough for some lucky contestant to take this thing. The NFC East's QB pedigrees will help it manage better weeks than the one it just had, but four bad secondaries in a pass-first league is no way to go through life. Until that changes, the NFC East will continue to set out a weekly feast for the opposition.

* Please remember, Chargers fans -- in the context of an article about the NFC East, "mediocre" should in no way be considered an insult.