A pair of undefeated teams square off on Monday Night Football.

Battle of the undefeated!

The Saints just tried to sweep the leg.

Hey man just throw deep balls to Mike Wallace every play if you are about to be throwing a bunch of interceptions tannehill. At least make em arm punts!

Bad fit on that iso. LB has to take it on with inside shoulder and turn it back to his help

@sgw94 they picked up some yards on that play.

Sean Payton doing Crossfit is the least surprising thing ever.

They need to get a stop though

Well now, maybe this isn’t as over as we thought…

How can a WR that looks as slow as Colston does EVERY PLAY keep getting open like that?!

The first week the Falcons moved down close to the goalline but ended up facing a third down. Cam got in a three point stance five yards off the ball and took a running start into the Falcons OL. One of the scariest things ive ever seen lol

Miami’s pass protection should be an e-mail scam.

I am not ashamed to admit I have had a hetero man-crush on Drew Brees for 15 years.

Gruden loves talking about the "Pump-Seam" because he ran it every game when he was coaching in Tampa. Used to put Galloway on the seam.

Forget about Vacarro’s big hits for a second. That dude jams the hell out of legit WRs on a regular in bump and run. Knocked Vincent Jackson down TWICE

Is it me, or does Gruden really love saying “Jimmy Graham?”

Yep, out of hand

@BoilerTMill he didn’t even seem like a pro guy for a few years into his Purdue career, right?

Always happy I can say I got to see Brees long before anyone else knew him. I was at his second collegiate start back in 1998 as a freshman.

so… the dolphins being undefeated…

We are watching a surgeon at work right now.

Random but is Colston a HOFer? I mean i never even considered it but…

@Run Home Jack Florio earlier linked to the mortenson article which said Freeman didnt have to fail a drug test or do anything to be put into the program, then Florio said in his post that Freeman must have done something to be in the program. So he kinda did

@Run Home Jack probably thinks Ritalin is ok if it helps you pay attention to commands.

Early sense on the public reaction to the Josh Freeman statement? Greg Schiano's days in Tampa could be numbered.

LOL at the defender “Eli about to throw me something, here”

@Run Home Jack Haha, other than that, Mrs. Lincoln, how was the play?

Gotta say, other than the struggles with Sproles, Miami’s defense has really shown up tonight.

I have never been more disappointed in the Bucs. Never. This is disgusting.

Joe Philbin looks like a caricature you get drawn on vacation.

Josh Freeman ripped the materials tag off his mattress before reselling it. #LeakedJoshFreemanFacts

The struggle is real for Mike Sherman

That pass right there is the one thing holding me back from really jumping feet first on the Dolphins bandwagon. Tannehill seems to always be good for one of those

That was just a bad decision.

those fear of missing out on football commercials are so true

At least the Bucs are in the news! (vomits)

wow me thinks the lady protest to much

Josh Freeman would do literally anything for a Klondike bar. #LeakedJoshFreemanFacts

Freeman: "Further, I have agreed to take, and have PASSED 46 NFL-regulated drug tests over the last year and a half.''

At a 2012 training camp session closed to the public, Josh Freeman refused to sign a ball for a Make-A-Wish patient visiting the Tampa Bay training facility. #LeakedJoshFreemanFacts

Freeman: "Further, I have agreed to take, and have PASSED 46 NFL-regulated drug tests over the last year and a half.''

Freeman statement: Let me be very clear. I have NEVER tested positive for any illegal drugs or related substances…;

When does Schiano leak to the press that Josh Freeman tried a rum runner once?

(That last one is a lie. There’s not thousands of Buccaneer fans, west coast or otherwise.)

Waiting for the Bucs to reveal that Josh Freeman has watched some "pretty freaky stuff" on his team-issued iPad.

shoudnt there be a database of what medicines NFL players are on so we as fans no what we souldnt throw at them in case of adverse reactions?

Didnt even need the puller, once again nobody in backside B gap

@Mark Ennis but we knew that. Glad to see confirmation though. Its over for Schiano here I promise

If Miami ends this drive with a field goal…

Helluva juke move, gotta high step it on in though son!

In a statement to FOXSports1</a>, Josh Freeman says he has an exemption to take Adderall for ADHD. Also says he voluntarily entered the program</p>&mdash; Mike Garafolo (MikeGarafolo) October 1, 2013

Hartline is so underrated

But let’s keep putting a LB one on one on Sproles.

Sproles is just torturing the Dolphins.

….unless they have Sproles and you decide to go three man rush and your end comes inside

DARREN SPROLES IS THE DEVIL

Holding calls are the biggest drive killers ever

also ive never seen a pony with a grill

Damn shame, because Miami was doing some nice things on this drive.

Nice disguise on that coverage. Wanted a smoke route but corner rolled up on WR late

Someone lost a shoe?

Tannehill should have led him more for sure, but Wallace has to catch that.

Right through his hands smh

Jordan barely plays most games but always ends up around the QB. Always.

Not exactly a 3 man rush there.

Breaking: Dion Jordan is really good at rushing the passer

Two bad third down calls killed the Dolphins. One on offense. One on defense.

Odrick shouldve been a DT his whole career. He is perfect in there in this defense. A step to slow for DE though which is where he was initially

I watched him college, but I still can’t get over “Nick Toon”

Work so hard to get to 3rd and 12 then basically give it away with a three man rush. Disgusting.

I was seriously concerned Solilai was about to kick the ref in the chest.

NFL thinking – I have to grab a beer. I'll go out front door around side of house in through back and go to the fridge. #3rdand1

When the Saints get off script they haven’t looked nearly as imposing on offense so far this year. Throw out the Arizona game because it was close until late in the 2nd half

They didnt need to and shouldnt have pulled Pouncey there. Guard pulled too so nah. Sit your butt down and block the nose Holmes

John Jenkins is playing lights out so far. Way better than I thought he would and I was already pretty high on him

RG didn’t get there where Pouncey pulled.

Cam Jordan should be making a play soon

In fact, I think Tannehill is a lot like Teddy, but I think Teddy has a stronger arm.

I will fully admit I never thought Tannehill would be worth a damn in the NFL. I was wrong.

He didn’t slide though….

Dolphins are a very talented team. Not sure why so many people are still overlooking them.

How about that move by Miller? Shook the LB to his feet 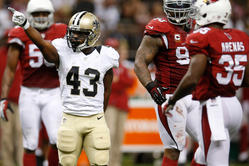 Good evening, gentlemen. All of Greg Schiano’s exes are praying he doesn’t start dishing on them, next.

Dolphins misaligned imo. So worried about Sproles to the flat that they had nobody for backside B gap. Walked in

Good lord, that was a dismantling. 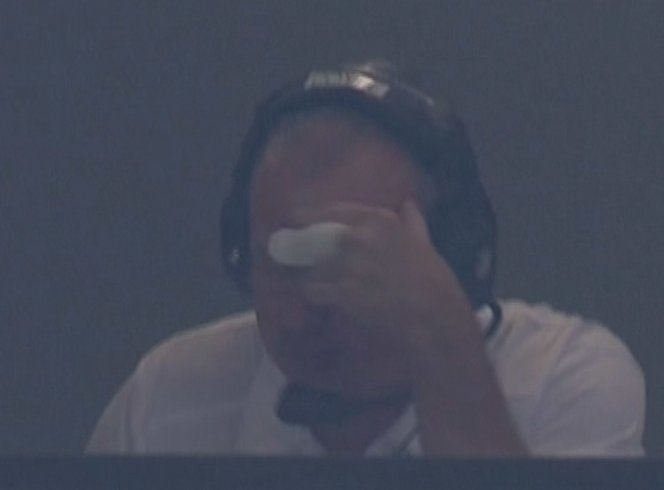 injured DC is toughing it out

The first drive of the game the Saints almost always just make the other team look silly.

Sproles is such a dynamic weapon, how do you match up with him? Guy can do it all

I picked the Dolphins to win but that was when i thought Cam Wake was playing. Hard to make up for what he brings

you guys think New Orleanes remembered 2 pay there light bill on time for this one?

Oh man, Cardinals had a running back named Stump Mitchell at that time. http://www.pro-football-reference.com/boxscores/198310240crd.htm

@Run Home Jack naturally the Rams would be involved in that

@Ryan Van Bibber yes….one that has never gotten a single person in trouble for though it happens several times a year

Best thing to hapoen to the Saints so far is Mark Ingram being nicked up. Now they can feed Pierre Thomas like they should have been doing all along

Also, has a tie ever occurred on Monday Night Football?

Bucs really showing a great understanding of how to build value in the trade market.

But which song in karaoke!?

yeah, i lost track of all the leaks about Freeman now

So did the Bucs release embarrassing karaoke video of Josh Freeman yet?