It's not a symposium: What Marc Trestman can do about the Bears' offensive woes

To be a Bears fan is to know nothing about a successful, modern NFL offense. New coach Marc Trestman is being counted on to change that.

Share All sharing options for: It's not a symposium: What Marc Trestman can do about the Bears' offensive woes

No, for the type of person in question, the best Chicago sports moment of 2013 came when Mike Ditka showed up at Bears practice one random August afternoon.

Chicago can be weird sometimes.

The Bears' last and only Super Bowl victory happened 27 years ago, but the city that proudly hosted them continues to champion their greatness like it happened yesterday. The '85 Bears are still on your television and radio telling war stories, hawking used cars, running amok at charity golf outings and running for mayor in the suburbs.

And much like it was back then, Lord Ditka still reigns over it all. For so many in this city, he remains the gold standard of what leadership, character, even masculinity is supposed to look like. It is kind of scary.

The Ditkaphiles live among us. They exist permanently in the depths of sports talk radio. They're the aunts and uncles who cut you a check every year on your birthday even though you haven't seen them since junior high. They sit on barstools in Beverly, downing MGD while talking about what a bad man Dick Butkus was.

When Ditka showed up at Bears camp, the reaction was as predictable as it was jubilant.

nothing better than seeing Coach Ditka at camp.maybe he will burn some fire into these young guys and let em no what being a Bears all about

BURN SOME FIRE INTO 'EM, COACH.

There's plenty more where that came from, with many favorably comparing Da Coach to Chuck Norris, in case you were wondering how long it takes Facebook to catch up to the rest of the world's jokes.

The '85 Bears were an incredible bunch with loads of personality, that much is true. They very well might be the best team in NFL history.  But it's been almost three decades of continued relevance. It's time to move on. Problem is, it's hard when the Bears have largely remained a poor man's version of that historically great 1985 team ever since.

Defense first. Forever and ever.

The Bears have had some damn good teams since Ditka's heyday, but they were always eternally flawed on the same side of the ball. To be a Bears fan over the last two-plus decades is know nothing about what a successful NFL offense is supposed to look like.

That's why the hiring of Marc Trestman is so exciting. 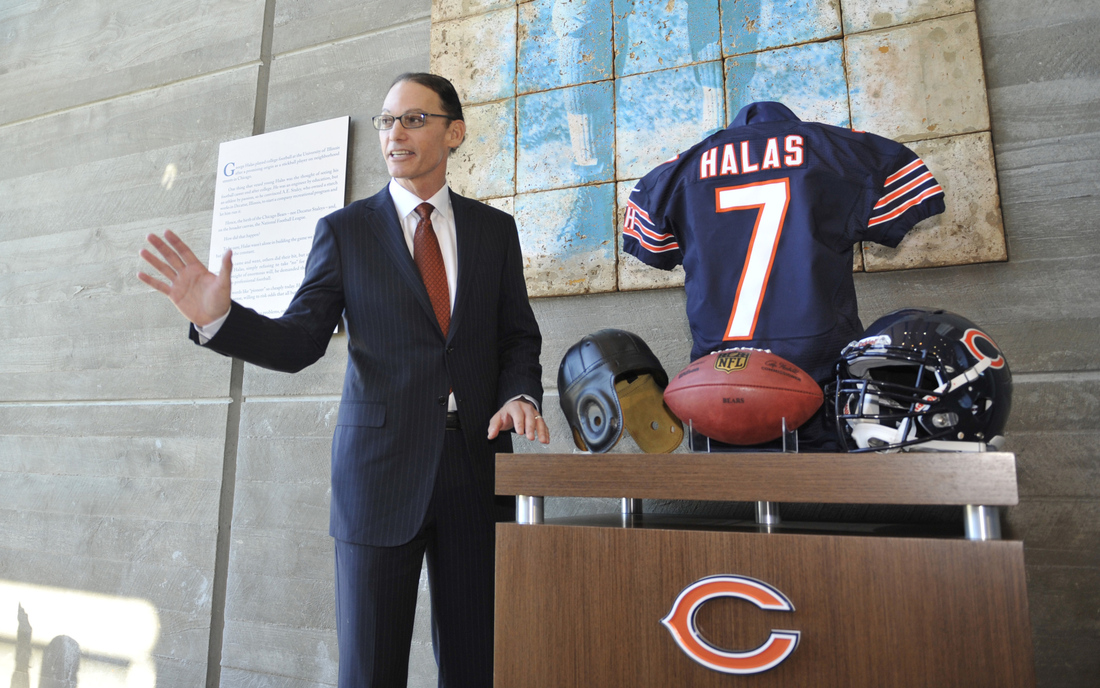 The decision to hire Trestman after nine mostly competitive seasons from Lovie Smith was always an odd choice to end GM Phil Emery's exhaustive coaching search. Trestman had been out of the NFL for a decade, spending the last five years tearing up Canada as the leader of the CFL's Montreal Alouettes. No coach had made the CFL-to-NFL jump since 1982, but Emery wasn't deterred.

Emery is jarringly open and honest about the Bears' way of doing things, and he is nothing if not thorough. It's a radical change of pace from the way most pro teams present themselves, and worlds different from the last Bears regime.

Smith was fired after a 10-6 season not because he isn't a good coach (he is), but because it was time to stop living in the past. It was time to do something the Chicago Bears have never done, and that's put together a modern NFL offense. Smith, for all of his competence -- brilliance, even, on the other side of the ball -- was never able to do that.

So the Bears turn to Trestman, a man who exists as the polar opposite of Ditka in every way. He's offense-first. He's polite. He doesn't scream at the players or the media. He doesn't profile as the type of person who will pull down a DUI on the way back from a road game.

At the first training camp practice of the year, when Jay Cutler was taking too long to get the offense in motion, Trestman yelled from the sidelines: "It’s not a symposium. Get the play going!"

Marc Trestman is unknown and untested, but the Bears are banking on his mind being sharp enough to deliver a quality offense for the first time in recent franchise history. It's a bet worth celebrating.

Since the turn of the millennium, the Bears have had an offense finish better than No. 23 in the league just one time: 2006, the year they advanced to the Super Bowl behind an almighty defense and with Rex Grossman as their quarterback. The offense finished No. 15 in yards that year. Since the year 2000, the Bears have had an offense that finished with an average rank of No. 26 overall.

It's been bad. Bad quarterbacks, bad wide receivers, bad draft picks, bad playcalling. When Smith was the coach, he liked to say the Bears "got off the bus running."

This was a nice way of saying the Bears couldn't pass the ball successfully if Bronko Nagurski's Hall of Fame bust depended on it.

There are too many stories of complete offensive ineptitude to document fully, but some moments stand out more than others.

The four-headed QB monster of 2004

The 2004 Chicago Bears may have boasted the most pathetic offense in recent NFL history. They finished dead last in yards and dead last in points. They started four different quarterbacks three times or more that season, none of them worth knowing: Grossman, Jonathan Quinn, Chad Hutchinson and Craig Krenzel.

I watched every game the 2004 Bears played, and I'm not sure how I'm alive to talk about it.

Consider games against the Redskins and Buccaneers in Week 6 and Week 7, respectively. In those two games, the Bears combined to throw for 125 yards. Drew Brees has been known to do that in one quarter.

No game symbolizes Bears football as well as the one played on Monday night, October 16, 2006 against the Arizona Cardinals.

The Bears offensive production that night: six turnovers, three points. Grossman averaged under four yards per completion and was picked off four times. Of course, the Bears returned two fumbles for touchdowns and Devin Hester capped the incredible comeback by taking a punt return to the house with three minutes left.

The Bears won 24-23 and stayed undefeated.

It was a classic Bad Rex performance, but far from the worst.

The Bears won a game in 2006 where Grossman went 6-for-19 for 34 yards and was picked three times. He finished with a 1.3 QB rating, and it wasn't even his lowest of the year. The last game of the regular season, at home against the Packers during a bitterly cold New Years night, Grossman went 2-for-12 for 33 yards and threw three picks. He finished with a 0.0 passer rating.

I remember everything about the day the Bears traded for Jay Cutler. I remember where I was, who told me the news, the half-hour phone conversation with my dad that followed where he deemed it the second best moment of his Bears fandom, only behind the Super Bowl XX victory.

This is what being a Bears fan is like. When your franchise finally gets its first good quarterback ever, that quarterback ends up being Jay Cutler.

Cutler was supposed to change everything, and why not? He was a 25-year old Pro Bowl quarterback with a cannon for an arm. The price of two first round draft picks to Denver seemed like pittance for the unthinkable scenario that was QB competence in Chicago. This city would have traded 10 more first round draft picks for such a thing, and thrown in a few corrupt politicians and Ronnie Woo Woo just for fun.

And then Week 1 of 2009 happened. Cutler was picked off four times in Lambeau Field against the hated Packers and the Bears were promptly curb-stomped. Suddenly, Chicago realized that maybe having a talented quarterback isn't enough. The quarterback needs to be surrounded by halfway decent pieces. In Cutler's first four years as a member of the Bears, that's always been the problem.

I certainly still ride for Cutler, as does most of the city. But there have been numerous times when Cutler, for whatever reason, has been just as mind-numbingly horrible as every other bad Bears quarterback of the last two decades.

There was a Thursday night game in San Franciso that first year where Cutler threw five interceptions, including one in the red zone to end the game. There was a game in 2010 where Cutler threw four picks all to DeAngelo Hall, of all people. There was Week 2 last season, another Thursday night game in Lambeau, where Cutler was picked four times and threw for 126 yards. He berated left tackle J'Marcus Webb on the sidelines, and the incident turned into a national talking point.

Sometimes, getting your hopes up is what hurts the most.

All of that leads us back to Trestman and Cutler and future's eternally burning hope. The excuses for Cutler have officially run out: the Bears have seemingly improved the offensive line substantially with free agent signings (Jermon Bushrod) and draft picks (Kyle Long, Jordan Mills). They've mercifully bolstered the receiving core with three huge targets who should be great. They've replaced the unoriginal, unworthy offensive coordinators Cutler has had to work with with Trestman.

Optimism is riding high for the Bears right now, and with good reason. Culture change is often preached but rarely practice in the same way the Bears are doing this season. They have nine rookies on the roster; the average age of the team is 26 years old.

This season will be different. It has to be. There's no Mike Tice, no Caleb Hanie, no Bobby Wade or Justin Gage or J'Marcus Webb to drag everything down. There's smart people in charge who have finally surrounded Cutler with a good supporting cast. The defense that scored eight touchdowns last year is all back, save for Brian Urlacher, who's presence was more symbolic than anything last season.

This is the Bears' shot. If they can't find offensive competence with this group, it may never happen.

• What rookies will have the biggest impact?