Eagles vs. Redskins: NFL, watch out for Chip Kelly's offense

Though one half, Chip Kelly is making mincemeat of the Washington Redskins. And that's putting it nicely.

Share All sharing options for: Eagles vs. Redskins: NFL, watch out for Chip Kelly's offense

Oh, and I'm writing this at halftime. That's nothing short of ridiculous:

Eagles had 21 first downs in the first half, which is more than 18 teams had in their entire game in Week 1.

Eagles have 21 first downs in the first half. Last year, the most they had in a GAME was 26.

Michael Vick had 190 yards and a pair of touchdowns. LeSean McCoy had 115 yards on 20 carries. And all this happened. Yes, get to your fantasy league and pick them up now.

Some of Philadelphia's ridiculous numbers have to deal with a Redskins offense that couldn't hang onto the ball, turning the ball over on two of their first four plays and possessing it for less than ten minutes in the first half. Part of it was a relentless onslaught of intriguing formations and elite athleticism unleashed at an absolutely frenetic pace by the former Oregon head coach.

Kelly's ability to adjust to the NFL was questioned by many of the media who believed the physically superior athletes in the NFL would eat "gimmickry" alive.

After one half, it appears those people were very, very, very wrong.

Look at that hole!!! Keep in mind these vaunted NFL Defensive Coordinators have had 8 months to slow down this "gimmick college offense"

They ran sets like this (note the unbalanced line) 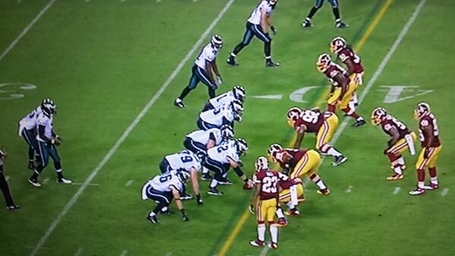 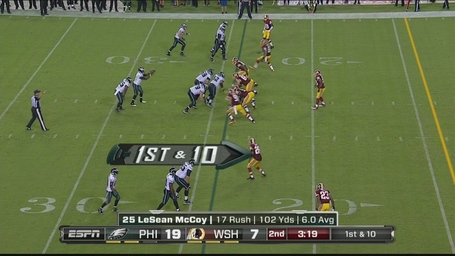 And in our SB Nation live room, people who know lots about football collectively freaked out:

Shanahan: "Can you please just set the clock to zero? This isn't very fun"

This isn't football, this is arson.

• NFL Debrief: Pryor for MVP and other irrational reactions to Week 1