Celebrity Hot Tub's random overanalysis for the Divisional Round

Water, Google, Age, Deputy Mayors, and Mom Rock. These are the elements that make a CHAMPION.

Share All sharing options for: Celebrity Hot Tub's random overanalysis for the Divisional Round

Using totally non-football related metrics, I managed to pick 3 of the 4 winners from the Wild Card Round, and if Kansas City hadn't collapsed in historic fashion, those picks would have been perfect. Given that established track record, there's no reason you shouldn't bet large - some might even say DANGEROUSLY large - amounts of money on this week's picks. Please note: we're using different categories for the Divisional Round, because the NFL Playoffs are about constantly evolving to your opponent, not remaining stale.

NO: We're using mom rock as a broad catchall that includes any music your mother might jam to whilst driving about; it need not actually be rock and roll. For New Orleans, you might think that artist would be Harry Connick, Jr. and, while that most certainly IS mom rock, there's a better answer here - Aaron Neville. Your mother may not know much, but she knows she loves Aaron Neville, and that may be all she needs to know.

The Sound and The Fury

On Jan. 8, 2011, Marshawn Lynch's 67-yard "Beast Quake" run propelled the 7-9 Seahawks to a stunning upset of the reigning Super Bowl champion Saints. Here is the story of the greatest run in NFL playoff history.

The Sound and The Fury

SEA: Oh, you've written off Kenny G as "that goofy-haired stringbean with the dorky sax?" Dude has sold over 75 million records. Dude has one of the most-purchased holiday albums ever. Kenny G took that ridiculous hair and that woodwind and got PAID. Your mom probably owns TWO Kenny G albums. Think about that next time you start running your mouth.

Winner - New Orleans. Much as we respect Kenny's hustle, this is impossible to argue with.

NO: Andy Kopplin, formerly of Teach For America and the Louisiana Recovery Authority. He has some seriously boyish hair. 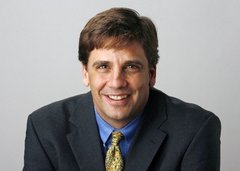 Winner - Seattle. There's no rule that says you can't have multiple deputy mayors, even if it seems unfair for our purposes, and that means Seattle's got depth where New Orleans is an injury away from a gaping hole in city government. Stay hydrated, Andy.

NO: We're looking at this list from the University of Florida's Environmental Hydrology Laboratory, and if you have issues with its methodology or accuracy, please remember that we got a degree in English specifically to avoid these kinds of issues. That all said, New Orleans ranks an impressive 8th on this list, probably because nobody over the age of 12 in the city has had a glass of water since 1974.

SEA: A dismal 180th. The hell are you idiots doing with all that rain?

Winner - New Orleans. Now we see the wisdom of going with just one deputy mayor. Half the water consumption.

Winner - Seattle. If your first result concerns the supernatural, perhaps you are doing something wrong. Or should at least be paying a different PR firm.

NO: Kicker John Carney, who played two games for the Saints at age 46, going 5/6 on field goal attempts including one game winner.

Winner - Seattle. We dare not pick against the greatest player at his position.

OVERALL WINNER - Seahawks pull out the comeback over the Saints, 3-2. This game will stay tight until the final minutes when, yes, you guessed it, Jerry Rice catches a game-winning touchdown for Seattle.

IND: Not a lot of great choices here, so we're going with Babyface, who's done fine as a singer but is probably more accomplished as a songwriter, with credits on "End of the Road," "Red Light Special," and "Take A Bow." (Hopefully your mom didn't listen to "Red Light Special" when you were around. That's how you end up with long-term problems.)

Winner - Indianapolis. What a rookie mayoral move to think you won't need a deputy. Now you're stuck going to every ribbon cutting in town, stupid.

IND: Far, far down the list at 189th. It's like Indianapolis was just too lazy to go far enough North to hit one of the Great Lakes or far enough west to hit the Mississippi.

NE: Not outstanding at 117th, but the Pilgrims just landed where they landed, and it was still a better option than Indianapolis.

Winner - Indianapolis. You're SO close to having the racist question knocked out of this screen altogether, Boston, but you're not there yet. Don't quit now!

IND: Kicker Matt Stover turned 42 during the 2009 Playoffs, and in his work with the Colts that year he went 15/18 on field goal attempts and was a perfect 40/40 on extra points.

NE: Doug Flutie, at age 43, played his final season in New England, appearing in five games and throwing just ten passes, though he did successfully kick an extra point.

Winner - Indianapolis. Clearly the Patriots wasted Flutie's talents if they only let him kick ONCE.

OVERALL WINNER - A decisive victory for the Colts, 4-1, although it will probably be a hollow one in 2028 when the city dies of thirst because securing drinkable water turned out to be one of the duties of the Deputy Mayor for Neighborhoods.

SF: Huey Lewis, a man who once successfully stowed away on an international flight and also sued Ray Parker, Jr. for song-stealing. Huey Lewis not only provided some of Back To The Future's best songs, he made a cameo. If you're riding in the car with your mom and Huey Lewis comes on, you could be in much worse shape.

Winner - San Francisco, until K-Ci & JoJo get hired to write the soundtrack for Back To The Future 4. Things are going to get so weirdly sexy for the McFly family.

SF: None. Again, how are all these cities skating by with unassisted mayors? Who's doing photo ops at the local biker bar? Who's giving a speech about the important of stretching at a senior center?

CAR: Charlotte City Council member Michael Barnes is also Mayor Pro Tem, but that appears to be a position chosen by the Council, not by popular vote.

Winner - San Francisco. Give me no deputy mayor instead of a deputy mayor I can't even pick any day. How do we know the Mayor Pro Tem isn't a robot? HOW???

SF: For some reason, San Francisco's not even on the list, though several nearby cities like Antioch (68th) and San Jose (222nd) are.

CAR: Charlotte comes in at 119th, four spots behind Lakeland, Florida. As in a land of lakes. Florida can't be trusted with resources of any kind.

Winner - Carolina. You'd like to see a higher ranking, but for all we know San Francisco doesn't have any freshwater whatsoever, which seems like it could be a liability.

Winner - San Francisco. I mean, the city of Charlotte isn't even half of the results coming up here. Just getting WHOOPED by Revenge.

SF: At the ripe old age of 39, offensive lineman Ray Brown started every game for the 2001 49ers and went to the dang Pro Bowl.

CAR: John Kasay, then 41, spent his penultimate season hitting 86% of his field goals for a Panthers team that went 2-14.

Winner - San Francisco. Old kickers are fine, but there's something delightful about a guy who's old enough to be the father to a teenager knocking defensive linemen on their asses.

OVERALL WINNER - 4-1 in favor of San Francisco, though this has the feel of a game that will be closer than the final score reflects, possibly because of a late turnover or two.

SD: If you're still wondering what mom rock even is, San Diego has the perfect example - Jason Mraz. Jason Mraz plays music you might hear at a dry wedding, and every Jason Mraz song could be used in a commercial for Gerber baby food. Moms can love Jason Mraz without even knowing who the hell he is.

DEN: Denver's got a strong counterpunch here with The Fray, the exact sort of band for the discriminating consumer who says they like all music except rap and country.

Winner - San Diego. The Fray's a little too melancholy in spots to be pure mom rock. Mom's got enough on her plate without the radio making her sad. Why can't your brother settle down with a nice girl instead of that Brienne? You saw how drunk she got at Thanksgiving.

SD: None, but we're willing to give San Diego a pass since they're treading water until they can find a full-time replacement for the dude who was grabbing butts in broad daylight. That guy's last job in city government? You guessed it - deputy mayor.

DEN: Cary Kennedy, a former state treasurer who is not related to those Kennedys.

Winner - Denver. Way to ruin the deputy mayor gig for everyone, San Diego.

DEN: Two spots ahead of Atlanta at 163rd, though that may change once Georgia secretly hooks up that super long garden hose to Tennessee's outdoor spigot.

Winner - Denver, obviously. Better ask Jason Mraz if he'll give you a couple million for a desalination plant, San Diego.

Winner - Good lord, the Internet has stupid questions. "Why is San Diego important?" "Why is Denver so great?" These are things a drunk teen wonders out loud right before passing out. We'll go with Denver here because "Why is San Diego the Chargers" makes me want to hug an English teacher.

SD: Doug Flutie, at age 42 in 2004, appeared in two games for the Chargers, won his only start, threw for 276 yards and scored 3 total touchdowns.

DEN: Craig Morton, 39 years old in the strike shortened 1982 season, started 3 games for the Broncos, threw for 193 yards, and racked up 0 touchdowns, 3 interceptions, and a 1-2 record.

Winner - San Diego, because we can't pick against Doug Flutie twice and feel good about it.

OVERALL WINNER - A 3-2 win for the Broncos is closer than some might expect, but it's still the outcome Denver fans are hoping for.