Two games on Saturday being played on the west coast and east coast of the United States will experience very similar weather conditions, wet and windy.

We are in the divisional round of the NFL playoffs and while brutal arctic air is not expected for any of these games this weekend, weather could play a roll for the first two games of the weekend. New Orleans visits Seattle in Washington State and Indianapolis heads to New England and Foxborough, Massachusetts, and both games are played on the complete opposite side of the country, the weather for both games will be very similar. The weather forecast is very wet and windy for both games this afternoon and evening.

For the Saints/Seahawks game a strong Pacific storm system will bring rain and possible thunderstorms. Winds will be very strong between 20 and 30 mph and could gust up to 45 mph. In New England, a storm system moves through the region during the afternoon evening. Steady to moderately heavy rain is likely as winds will be out of the southwest and could gust 35 to 45 mph later tonight. 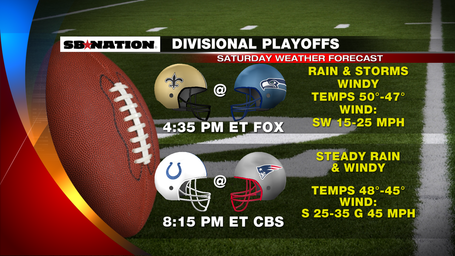 SUNDAY PLAYOFF GAMES:
The most active weather we see this weekend happens today, with Sunday being the nicest weather for the games being played. Both games should be fair with moderately mild temperatures. 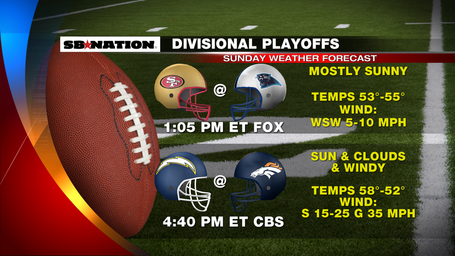