Will Tukuafu injury: 49ers FB limps off field vs. Panthers

The big fullback had a nasty-looking injury on the game's opening possession.

Share All sharing options for: Will Tukuafu injury: 49ers FB limps off field vs. Panthers

San Francisco 49ers fullback Will Tukuafu had a nasty-looking lower leg injury and has left the game against the Carolina Panthers.

UPDATE: The 49ers have announced that Tukuafu has been ruled out for the remainder of the game.

Tukuafu's foot rolled awkwardly under Captain Munnerlyn while being tackled on the Niners' opening drive. 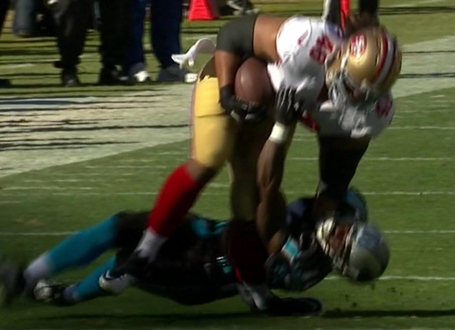 Tukuafu, who recorded his first touch of the season on the play, was able to walk off the field under his own power but has not yet returned to the game.