Newton and the Panthers offense were suffocated by the 49ers defense, while Kaepernick managed the San Francisco offense to a comfortable 23-10 win.

Cam Newton led the Carolina Panthers to a division title and his first playoff appearance in his third NFL season, but they will be going home disappointed. Newton was stifled by the San Francisco 49ers' defense in the 23-10 loss, while Colin Kaepernick got the fourth playoff win of his career. 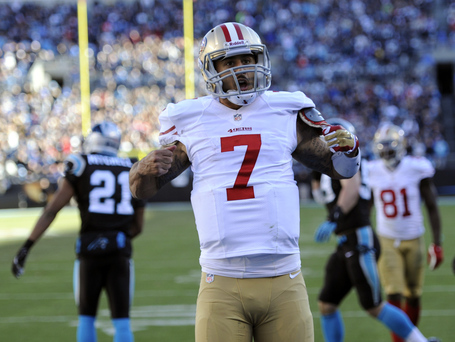 Newton and the Panthers appeared to have the edge early on -- Kaepernick struggled to start, completing just 11-of-24 passes while Newton gave Carolina the lead with a 31-yard touchdown dart to Steve Smith. The Panthers held the 49ers to just 59 total yards with a few minutes left in the second quarter and looked to be going into the locker room with the lead.

Kaepernick woke up just before the half, though, leading a 12-play, 80-yard touchdown drive that put the 49ers up, 13-10. The 49ers held that lead for the rest of the game while Newton went cold down the stretch. The Panthers held the ball four times in the second half, resulting in two punts, an interception and the end of the game. Carolina went away from the running game and Newton ended up leading the team with 54 rushing yards on 10 carries.

Newton finished the game completing 16-of-25 passes for 267 yards, a touchdown and two interceptions. Kaepernick had only 196 passing yards, but he stayed calm, got over his early struggles and relied on the running game and defense to win. The biggest drive of the game came on San Francisco's first possession in the third quarter, when Kaepernick led the team 77 yards on eight plays and sealed the game with a four-yard touchdown run.

Newton took some steps forward in his third year and looked to have an early advantage, but in the end San Francisco's more experienced group won the day. They move on to the NFC Championship Game for the third straight year and have a date with their divisional foes in Seattle next Sunday.