If we can just reorganize the playoffs so the Colts only play AFC South teams, they'll definitely win the Super Bowl!

Finally, you can rest easy, Steelers fans. Those cheating Chargers, who clearly conspired with inept and corrupt officials to steal your playoff spot, have been eliminated. (You still have to be depressed, Chiefs fans. I don't really know what to do about that.)

Time of Death: Don't worry, Marques Colston. I still think you can win the starting QB job in Minnesota this offseason.

1. Before this weekend, 60 other teams had been shut out in a playoff game through three quarters. Only two went on to win that game: the 1978 Falcons beat the Eagles 14-13, and the 1948 Eagles beat the Chicago Cardinals 7-0. The Saints, who hadn't entered the fourth quarter of any game with zero points since 2002, became team 61. It's a bold stance, I know, but I believe not scoring through 75% of the game is a bad strategy. 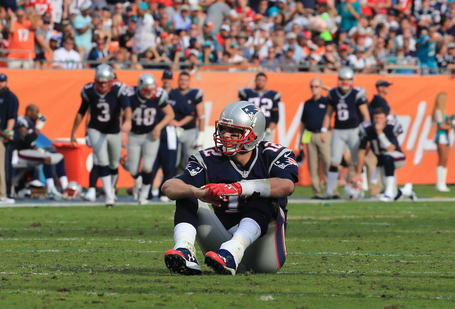 Jason Chilton previews the Conference Championships, and has a look at what happens next for the four teams that lost this weekend.

2. Through those first three quarters, the Saints went one-for-seven on third down and averaged a near-meaningless 0.86 yards per play. That's a major failure when you consider New Orleans ranked fifth in the league this year in third down conversions and second in yards per third down play.

3. Yes, Marshawn Lynch is a nightmare personified, but we shouldn't ignore the contributions of one of Seattle's less intimidating players - kicker Steven Hauschka, who hit all three of his field goal attempts in less than ideal weather conditions and has only missed two kicks all year, one of which was blocked. Hauschka's 94.3 percent field goal rate this season is the best in franchise history and ranks fourth all-time amongst kickers who have attempted at least 30 field goals in a season.

Time of Death: This was just a seven-point game after three quarters, and then LeGarrette Blount took the first Patriots touch of the fourth 73 yards for a touchdown.

1. The Andrew Luck Colts have a dirty secret. (No, it is not his horrific beard, which is FAR too public by any standard of societal decency.) In Luck's two seasons, the Colts are 10-2 against AFC South opponents ... and 13-10 against everyone else. His touchdown to interception ratio is 2:1 within the division and 1.28:1 outside it. [REMAINDER OF DISCUSSION REDACTED BY FEDERAL SPORTS OPINION LAW FOR DENIGRATING ANDREW LUCK]

2. That said, Andrew Luck doesn't play defense -- yes, you're right, he is a coward -- so we can't blame him for letting the Patriots put up their second highest rushing yardage total in team playoff history. The Colts were particularly terrible at stopping the run on first down, where New England averaged over seven yards a carry and had twelve attempts that gained at least four yards.

3. Four times in this game, the Patriots drove over 70 yards for a touchdown, something Indianapolis had only allowed 19 times during the regular season. The most demoralizing part was that, when all of those drives started, Indianapolis was only trailing by a touchdown. Now the Colts have to spend the offseason listening to Jim Irsay's karaoke practice.

Ur such a beautiful fish,floppin on the summer sand...lookin 4 the wave u missed...when another 1 was close at hand...ur such a stupid girl.

Time of Death: Down thirteen points, the Panthers had the ball at the San Fran 28 with 4:30 to play. And then only the first part of that sentence was true, after Cam Newton threw an interception to Donte Whitner.

1. Panthers not named Cam Newton did nothing on the ground against the Niners, averaging just 2.78 yards per carry. Only two Carolina runs gained ten yards or more, and both were by Newton; this is where San Francisco's defense shines, having allowed only 34 rushing attempts that went for double digit gains during the regular season.

2. On the other side, the Panthers only managed to sack Colin Kaepernick once all day, a surprisingly low total considering they racked up 6 sacks on 28 Kaepernick dropbacks when these teams met in Week 10. Sacks turned out to have a strong correlation to wins for Carolina this season - they went 10-0 in games where they recorded at least three sacks, and 2-5 when they didn't.

3. Carolina might have had the strangest "long" drive of the year midway through the third quarter, a thirteen play, 8:20 affair that somehow only netted 31 yards of field position. Of the 55 drives of 8:00 or longer this year across the NFL, only two others didn't gain 50 yards. The 2013 Carolina Panthers: Taking A Long Time To Go Nowhere.

Time of Death: Peyton Manning found Julius Thomas on 3rd and 6 for a 9 yard gain right before the two minute warning, and San Diego's comeback attempt ended without the offense ever getting a chance to tie the game.

1. The Broncos went nine-for-13 on third down, but it helped that they only faced an average of 4.69 yards to gain. San Diego only went four-for-12, in large part because they averaged nearly eight yards to gain to pick up a first down.

2. Those conversions allowed Denver to hold the ball for a very, very long time - the Broncos averaged 8.75 plays and 4:25 of game time per drive. The league averages this season were 5.7 and 2:33 and, yes, while time of possession may sometimes be a meaningless stat, I'm reasonably certain the Chargers would have appreciated an extra two minutes of clock on their side.

3. Oh, that "playoff teams held scoreless through three quarters" stat we mentioned re: the Saints? Chalk the Chargers up as team 62. Seriously, somebody make me a head coach. My "we will score before the fourth quarter" offensive approach is going to revolutionize the game.