The Senior Bowl rosters are set for the annual college football all-star game in Mobile.

The rosters are in place for the Reese's Senior Bowl with both teams set to feature top talent on their way to the NFL Draft. The Atlanta Falcons coaching staff will instruct the North team, while the Jacksonville Jaguars will coach the South team. The annual all-star game allows for NFL-ready talent to increase their stock prior to the NFL Combine and individual pro days. With a record number of talented underclassmen entering the annual selection process, the Senior Bowl will be extremely important for the older prospects this year.

While the game itself is important, teams and media will attend open practices all week. These practices will give scouts a chance to get a personal view at the prospects and their various abilities. Several players will want to answer questions about their mechanics, work ethic and abilities during this period.

Here is a look at both rosters for the Senior Bowl:

Update: Changes to rosters due to injuries

The North team is headlined by the likes of quarterback Tajh Boyd, running back Carlos Hyde, defensive end Trent Murphy and cornerback Darqueze Dennard. While there are big names throughout the roster, these four will likely be the focus of plenty at the Senior Bowl. Although Dennard and Murphy are the only projected first-round picks on the roster, Boyd and Hyde are big names with an opportunity to improve their draft positioning.

Other players like offensive tackle Zack Martin, linebacker Chris Borland and safety Deone Bucannon will attempt to prove they belong at the top of the draft. Quarterbacks Stephen Morris and Logan Thomas will also try to improve their credibility as pro-style passers. 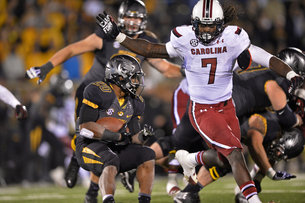 Update: Changes to rosters due to injuries

The South team features two talented quarterbacks in Derek Carr and David Fales, who will look to show they can succeed against the best in the country. Both are from small schools in California and while they have played some tough teams in their careers, they can now show off their skills against an all-star team. They will have a pair of big targets on their side with wide receivers Mike Davis and Cody Hoffman.

On defense, eyes will be on defensive tackle Will Sutton, as he tries to find a natural position in the NFL after gaining plenty of weight this season. Along with Sutton, linebackers Kyle Van Noy and Christian Jones will look to find new NFL positions and rid themselves of the "tweener" label. The defense will be led by inside linebacker C.J. Mosley, who may be the best player on the entire roster.