Richard Sherman's pass deflection: The Xs and Os behind the big story

Take away the postgame interview and all the hot takes, and Richard Sherman's pass deflection is actually a pretty routine play for an extraordinary Seattle secondary. Danny Kelly breaks down the play that launched a thousand think pieces.

Share All sharing options for: Richard Sherman's pass deflection: The Xs and Os behind the big story

The NFC Championship Game between the Seahawks and 49ers was pretty much exactly what everyone expected it to be. It was a physical, tough, emotional, back-and-forth defensive battle that pitted the NFC's two best teams against each other; it was a matchup that had been widely predicted going back as far as the preseason, and as high drama, it didn't disappoint. It had to be this way.

Harbaugh vs. Carroll. Wilson vs. Kaepernick. Lynch vs. Gore. Seattle's defense vs. San Francisco's. It had to be this way.

If you're a Seahawks fan, this graph below from Advanced NFL Stats makes you realize how close you really just came to total heartbreaking disaster, and if you're a Niners fan, this just tells you how close you really just were to ecstatic glory. After Vernon Davis caught a short pass over the middle at the Seattle 18-yard line to grab a San Francisco first down with 55 seconds remaining, the in-game win probability for both teams was at .50. 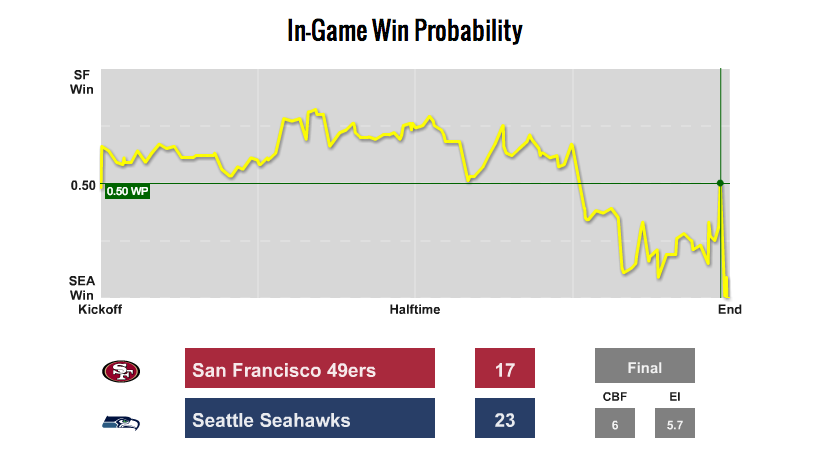 In other words, based on extensive modeling of previous game situations of this down/distance/time, this game was 50-50 with 30 seconds remaining.

Since that fateful play in the end zone, the world's been focused on the histrionics, interviews and Twitter beef that followed. For me, this play came down, essentially, to two players:

The former, midway through the season, debuted a commercial for Beats by Dre that depicted the San Francisco quarterback drowning out the literal and figurative noise while arriving at a non-denominational stadium filled with non-denominational fans adorned in blue, green and gray.

The latter, whose catchphrase just happens to be "you wanted this noise," debuted his own Beats commercial during the actual game that Kaepernick's ad had foreshadowed. You bet your ass a smug Dr. Dre was in attendance on the sideline for this one and this morning, Beats by Dre's Mad Men are just sitting back, feet kicked up in their Manhattan offices drinking their scotch and feeling awesome about themselves, high-fiving a little harder for their amazing marketing coup de grâce.

There hasn't been a better destiny-aided sports-related ad campaign since Tiger Woods sank that putt at the '05 Masters where he made sure his ball defied the laws of physics to stop for a second and flash the swoosh. It had to be this way.

Look, I'll spare you my take on the post-play, postgame stuff. I am more interested in the actual football that took place. The Xs and Os, the strategies, the execution. People will say what they will about Richard Sherman's personality, but this play, in the most crucial of moments, was nothing short of brilliant.

An All-Pro cornerback making a play that sent his team to the Super Bowl. Peak performance when his teammates needed it most.

First, to set the stage. On the proceeding possession, the Seahawks had kicked a 47-yard field goal to take a precarious six-point lead. The Niners took over with 3:32 on the clock, at their own 22-yard line, and needed to go 78 yards against the best pass defense in the NFL in 2013 -- arguably one of the best pass defenses in NFL history -- to get a win and a berth in the NFL's championship game.

After converting a fourth-and-2 from their own 30 and then grabbing a 16-yard completion on the subsequent third down, the Niners found themselves at the Seahawks' 29-yard line with a minute to go. Seattle pucker factor: 9.5. After a timeout, Kaepernick next completed an 11-yard pass over the middle to Vernon Davis to move the Niners to the 18-yard line.

It had to be this way.

Though the Niners had two timeouts remaining, they chose to hurry to the line, set and run a play. It made sense -- they can either throw over the middle and then use a timeout or take a shot knowing they've got three more if it falls incomplete.

The Niners line up in their "11" personnel, three wide receivers, a running back and tight end. The Seahawks are in their nickel defense, are spying Colin Kaepernick with their best athlete in Bruce Irvin and have Richard Sherman in press coverage on the outside opposite Michael Crabtree.

You can see the routes below. Crabtree actually runs a stutter-go, hoping to get Sherman off balance and beat him downfield. 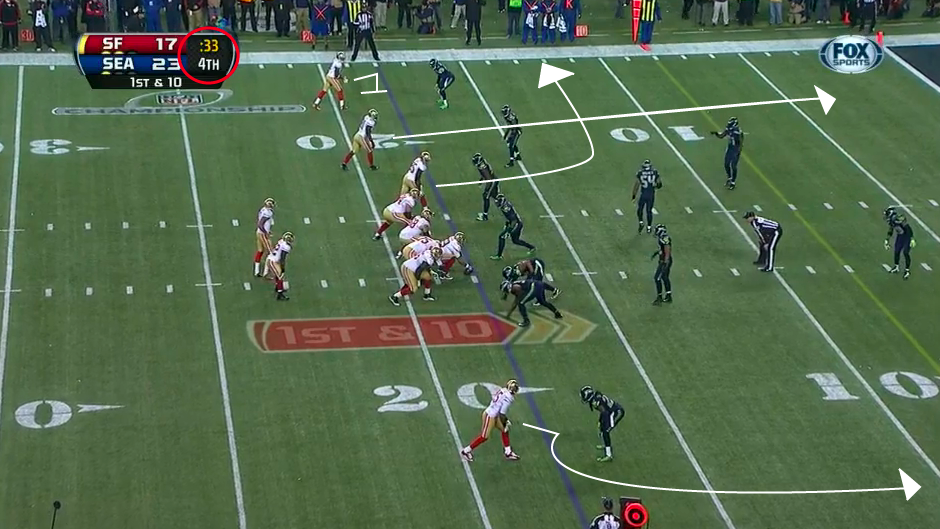 Here's how it plays out in real time.

Kaepernick, who had thrown in Sherman's direction only once in the game prior to this play, took his shot at all the marbles. It was slightly underthrown, but against a shorter corner, probably would've been far enough into the corner/sideline to get the job done.

Sherman, after sticking with Crabtree on his double move and all the way into the end zone, feels his opponent on his hip, and gets his head turned around to spot the football. This is absolutely vital.

The ability to get his head around to find the ball and make a play on it is what sets apart the athletes from the players at that position. There's probably no one better than this -- particularly defending the sideline go-route -- than Richard Sherman.

For his part, Crabtree does a nice job of trying to establish leverage and position to the sideline with an ever-so-subtle pushoff to Sherman's shoulder. This is a savvy veteran technique to get separation right as the ball arrives, and because of it, Sherman nearly overruns the play.

However, not many cornerbacks in the NFL have Sherman's length, body control and athleticism. The combination of the three allows him to tip this pass. 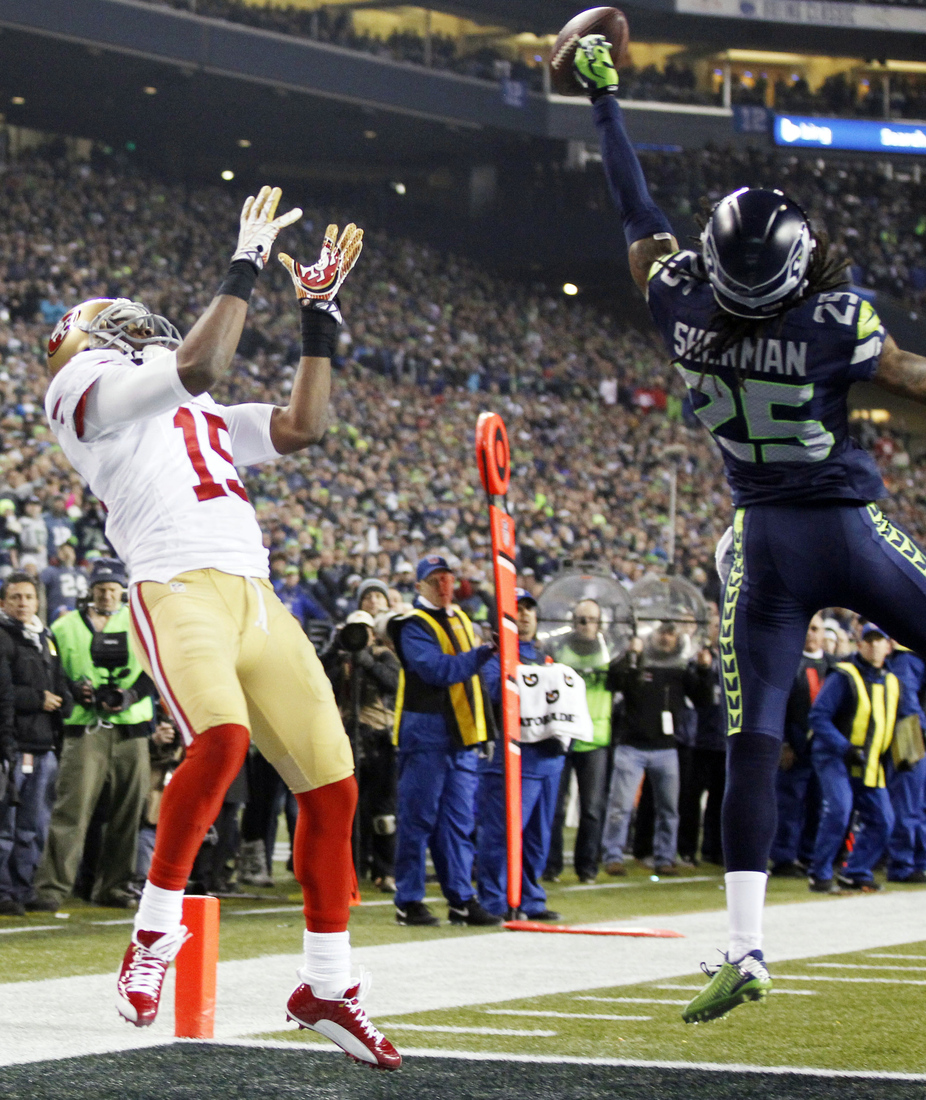 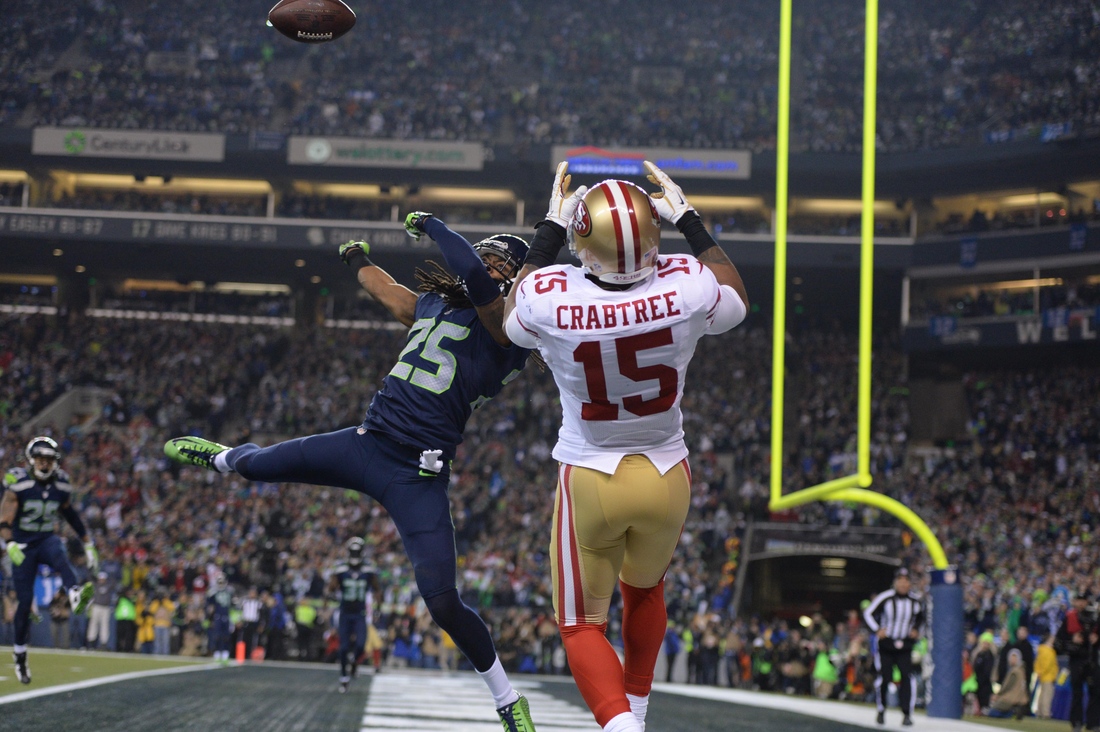 A recent ESPN Sports Science segment looked to measure Sherman's range based on his measureables.

This play reminds me of an article I wrote about Sherman back in September, where I brought up a quasi-famous photo of the Seahawks cornerback that had made the rounds on the Seahawks' blogosphere during the summer.

That photo was accompanied by the rumor that Sherman hadn't allowed a reception to anyone during OTAs, minicamp and training camp. As I said at the time, "good luck trying to drop a pass into a bucket down the sideline over a 6'3 corner with excellent timing and a 38" vertical."

In fact, the biggest question I have about the play pertains to Kaepernick's decision to challenge Sherman in the first place. You may or may not be into stats, but these paint a picture of the player you're throwing at with the season on the line:

Richard Sherman (@RSherman_25) was the least targeted corner in the league this season. He also lead the league in INTs (8) #Seahawks

Since entering the NFL, @RSherman_25 leads the league in interceptions(20) & passes defended(57).

Now. The pass deflection, in and of itself, was impressive enough, but the fact that Sherman had the piece of mind to tip it to his teammate -- and make no mistake, this was an intentional act -- made this play that much more magnificent.

From NBC's NFL Turning Point, Sherman explains how he and the Seahawks' defense practice this play.

If you're wondering why Seahawks head coach Pete Carroll said, "for Richard, I think [that kind of play is] pretty routine, to tell you the truth," it might be because he sees Sherman do this in practice on a weekly basis, and because he made a very comparable play in Week 15.

Funnily enough, Sherman made this play -- one that looks eerily similar to the one that made the Seahawks the NFC champions -- at MetLife Stadium, on the field he'll be playing on in Super Bowl XLVIII. 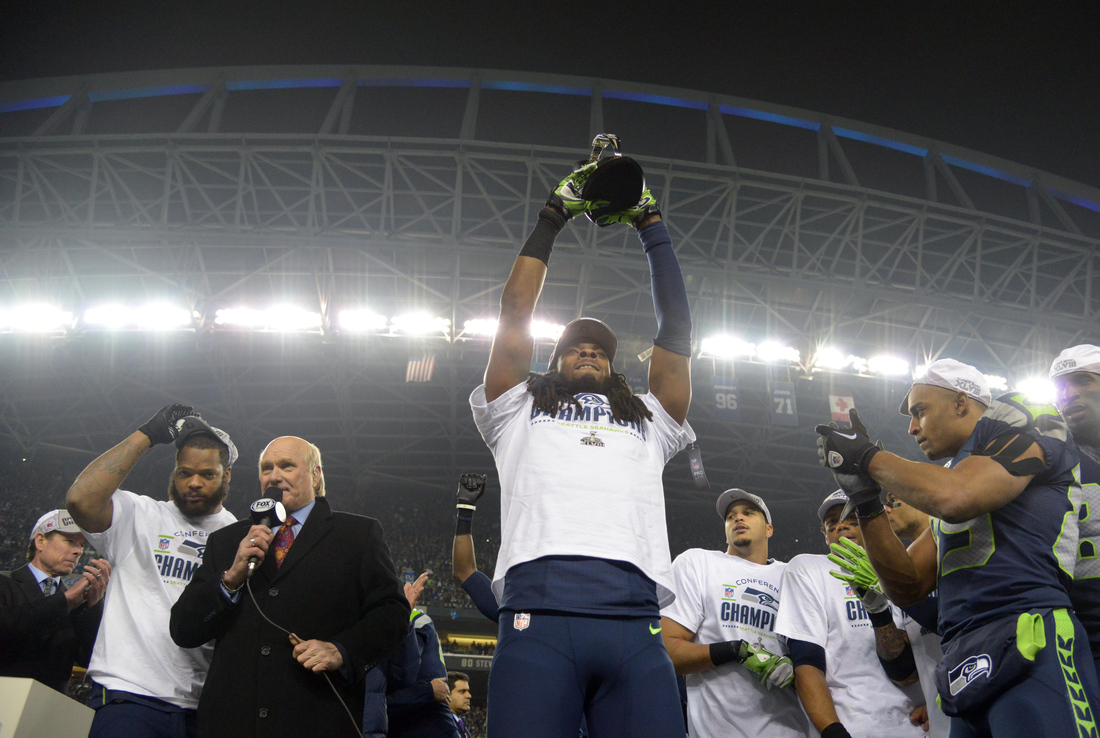