The NFL is making some wholesale changes to their all-star game, but will it work?

The NFL released the new Pro Bowl jerseys back in October, but with the game not-so-suddenly upon us it's about time we took a look again: 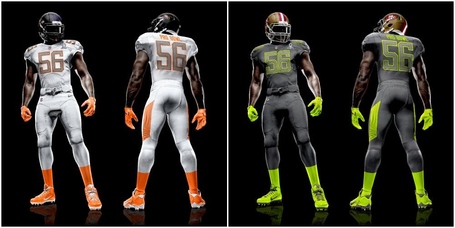 Nike designed these uniforms, which appear to look quite a bit like some of the college uniforms they've designed for Oregon (especially the NFC digs on the right). They're certainly far removed from the old blue and red uniforms, and the NFL is trying to drum up interest in the old all-star game by giving it a facelift.

It's not just the jerseys that are different, either. The entire selection process for the players has been changed. Instead of the AFC and NFC, Team Sanders and Team Rice picked players from a pool in a real-life fantasy draft of sorts. That's ended up in some promising roster combinations, like Drew Brees/LeSean McCoy/Josh Gordon on Team Rice and Cam Newton/Jamaal Charles/A.J. Green on Team Sanders.