Bed, breakfast and beyond: The Airbnb guide to Super Bowl tourism

Hotel rooms in New York are expensive even when the Super Bowl isn't in town. So why not try a bunk bed in a stranger's closet, or a suburban Jersey condominium?

Share All sharing options for: Bed, breakfast and beyond: The Airbnb guide to Super Bowl tourism

There is not, in point of fact, an inexpensive time to be in New York City. In ordinary years, the dim and slushy days of February are something like the opposite of tourist season, but even then the city exacts its little taxes. Simply being on the street seemingly costs money, with every interaction grumblingly flinging open the gates so that money can escape your bank account, the funds leaving either in small and fast-moving groups or big fearless bunches or, if you want some sort of fine dining tasting-menu experience -- or want to go to the Super Bowl -- just being suddenly and irreversibly raptured up into the air, leaving you alone here on earth, or alone except for a smallish plate of Duck Three Ways or a $2200 ticket in MetLife Stadium's second deck.

No one ever said this city was nice, or easy, or fair. In fact, New Yorkers tirelessly point out how un-nice and difficult and unfair the city is. Because this would seem to be the place to mention it, people put up with all this -- the expenses and annoyances, and other New Yorkers constantly, tiresomely remarking upon them -- because New York is also more or less the best city in the world. But it is cruelly expensive to visit even when the Super Bowl is not happening just across the Hudson River, in a strange and frightening land and in predictably terrible weather. It is especially cruelly expensive when all that is actually happening.

Most likely, the New York that most of New Yorkers experience -- happy hour beers and lamb burgers at Xi'an Famous Foods and so on -- will for the most part not be impacted by the influx of flush out-of-towners. They are not here to do New York things so much as they are looking to network and synergize personal brands (i.e. "have sex") and get bottle service and do the other things that happen around the Super Bowl, now that it has become a ghoulish trade show with a football game in the middle of it. Super Bowl tourists will clot our more popular steakhouses and under-tip at our better gentlemen's clubs, but they will mostly keep their distance from the New York (and New Jersey) in which people actually live. Unless, that is, our Super Bowl tourists choose to find their accommodations via Airbnb.

Ordinarily, of course, Super Bowl tourists would probably not do this. But the city's hotels are both booked up and hilariously marked up, and anyway are still hotels. But at the moment, it costs nearly $1000 a night to stay in a fancy hotel whose location's number one selling points are "near mass transit" and "safe distance from the Times Square Red Lobster." At that price, staying in an actual residence -- whether you're hosting some horrific network-y Super Bowl Party or putting on your best sleet-proof business-casual and heading to the game -- seems like a decent idea.

(One reason it might not seem like one, which I'll just leave here in these parentheses: Airbnb's whole model is in clear violation of New York state law. Not in a "deals this good are criminal" sense but in a literal it-is-illegal-for-people-to-rent-a-room-for-less-than-30-days sense. So that is a thing you can bear in mind, or not.)

But yes: why stay in some antiseptic room and have someone make your bed and possibly leave small chocolates on your pillow after doing so, when you could stay in the real New York? That is, in a bunk bed in a stranger's closet, in what was advertised as a bedroom but was clearly once a space designed to hold less-safe cleaning solvents, located in a building on Avenue C that was originally a city-funded Home For Despised Immigrants. Especially when the two are more or less the same price! Why, then, not go the Airbnb route for your Super Bowl week visit?

My admittedly non-exhaustive study of the New York City apartments available for Super Bowl week showed them to be either splashy and hilariously, implausibly expensive or of the aforementioned bunk-bed-in-solvent-closet kind -- a sleeping loft that "is perfect for two shrunken adults, one small and non-claustrophobic adult or a larger child" and the like. There are swaggy Tribeca lofts that look like truly fantastic places to live (or host a wretched catered Super Bowl party for clients) but which are hilariously expensive -- this one costs $6,500 per night, which is an outlier but not nearly enough of one -- even by New York standards. This modest Midtown apartment, for instance, is $1000 a night. There is no room to hold a client-related event there, but the listing informs that there is "enough room for another air mattress" in the living room.

One problem with identifying more or less appealing Airbnb listings is that the photographs in the listings are generally taken by non-professionals. This means that even a listing for a splashy six-bedroom loft space north of Union Square contains a few photos that make it look like Buffalo Bill's residence in Silence of the Lambs. 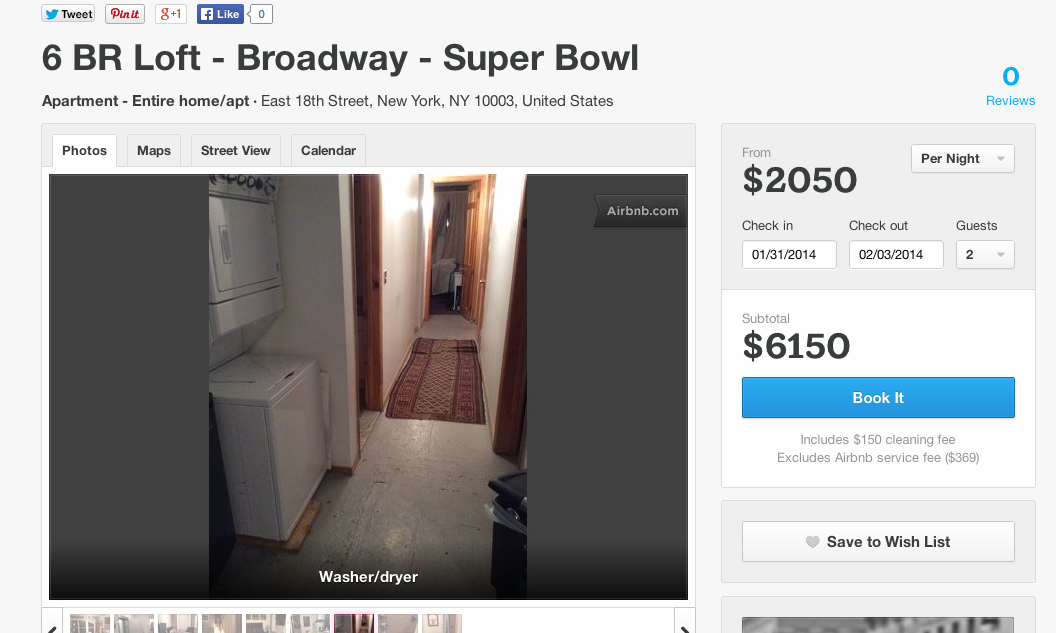 Other home photographs aren't much better. One trend that seems kind of alarmingly popular on Airbnb is to photograph your home under harsh light, and with a flash. The resulting photographs, even of very nice apartments, look not unlike the work that would be produced if the NYPD hired Terry Richardson to photograph crime scenes.

In general, weird choices abound. Real estate photography is a subgenre second perhaps only to Eastern European Online Dating Profiles when it comes to inexplicable choices -- very consciously framed photographs that nevertheless include piles of underpants or a Paul Reiser Fathead or some other puzzling human thing. This apartment on Canal Street -- not Tribeca so much as JustCa -- has a lot going for it, for instance. But see if you can spot all the strange choices in this photograph, which is once again designed to help rent the place. 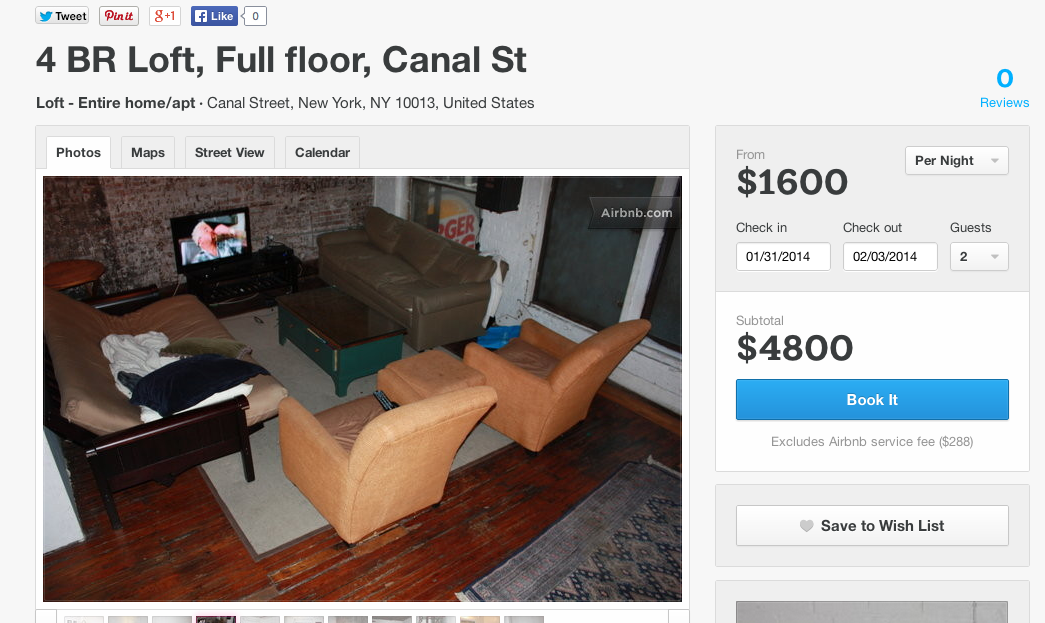 A hint: one of those strange choices is a famous food person with the complexion of a Dorito, and he is eating something wetly on the television.

But of course these cost what they cost: they are luxurious homes in posh neighborhoods of a very expensive city, and their target audience consists solely of people looking to spend as much money as possible. The ones with more ambitious/aspirational pricing are not going to be rented, but surely someone knew that, deep down, when they tried to get someone to spend $4500 to sleep in a loft bed for a week. Squint hard enough and there's something human and kind of inspiring about the attempt, in the same way that someone attempting to sell a "limited edition" Beanie Baby on eBay for $75,000 is both doomed not to sell it and representative of the best and silliest and most fundamentally human optimism.

And anyway, if you're actually looking to be close to Giants Stadium, you shouldn't be looking in Soho or Tribeca. You should be looking in North Jersey, where hundreds more listings offer a convenience to the swampy moonscape of the Meadowlands and MetLife Stadium that none of these posh Manhattan apartments can offer. These places are also aspirational/psychotic in their pricing, but they're a lot more frank in what they offer.

The thing with being a tourist is that you are going to be a tourist. Stay in a hotel, and you will have a certain type of touristic experience: expensive and comprehensive and with sad chewy rolls and scalding acidic coffee available in the mornings. Go the Airbnb route and you will have a different sort of touristic experience: using someone else's towels and toilet, padding around their home as if it were yours and trying to avoid the terrifying laundry area. And New York has a cruel, casual way of making even longtime residents feel like a guest -- as if there's another town happening just above to which it is impossible to gain entry, as if the whole city was just vertical miles of locked doors with pristine luxury apartments beyond. Super Bowl tourists will not be the only people on these streets wondering what they're doing there.

If you're here for the Super Bowl, though, I can only suggest going all the way. I have found the most inexplicable Super Bowl listing on Airbnb, a townhouse in Hasbrouck Heights, NJ. The listing has but one photo, and costs thousands of dollars a night. There are not many details given about the place or its renter, except that he does not care about rotational norms in real estate photography or understand the market for vaguely described townhomes nearish to football stadiums.