2014 Super Bowl weather forecast: Will it or won't it snow?

The only thing bigger than the Super Bowl this year has been the hype around playing the Super Bowl outside in February in a cold weather city. Lots of forecasts months ago were calling for a snow storm. Will it snow Super Bowl Sunday?

Share All sharing options for: 2014 Super Bowl weather forecast: Will it or won't it snow?

Once it was announced that New York would host Super Bowl XLVIII and the teams would play outdoors in February, there were all sorts of weather forecasts calling for major winter storms and possible blizzards and we were several months from even starting the NFL Season.  Now that Super Bowl week is here and the teams and fans are in New York City preparing for the big game, it doesn't look like the dire weather forecast of mega storm will come true. But what can teams and fans expect this week and weekend. 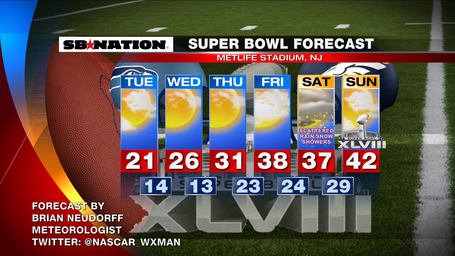 Today into Wednesday the arctic air that has had its grip across the eastern United States will continue to make things cold and very blustery. High temperatures each afternoon will be in the low to mid 20s but when you factor in winds of five to fifteen miles pe hour it will feel like the single digits and low teens. Fair weather dominates most of the week all the way into early Friday with partly to mostly sunny skies.

Thursday and Friday temperatures slowly warm back into the low to mid 30s across New York City and New Jersey. Skies remain partly to mostly sunny but winds, especially in the city will still make it feel very blustery with wind chills in the teens.

Weak cold front works into the region Friday night into the weekend. This system is not expected to cause much problem. There could be a chance of rain and snow Saturday into Saturday night. At this time not seeing any concern for Super Bowl Sunday. Game time weather forecast can be found below.

• Bed, breakfast and beyond: The AirBnB guide to Super Bowl tourism