Share All sharing options for: Super Bowl XLVIII: Secrets of the Seahawks secondary

That's Seattle's historic defense boiled down to a simple premise out of the playbook. But before you can understand what it is that makes the Seahawks and their secondary so good, you have to go back further, starting with the three tenets that guide Pete Carroll's defensive philosophy.

No. 1 Eliminate the big play

Giving up big plays will cost you the game. Carroll is most concerned about protecting the deep middle of the field against the explosive pass. That's the first thing he will teach to new safeties, and it's a statistic that Carroll and his staff monitors closely.

No. 2 Out hit the opponent on all plays

This philosophy of being physical and punishing opposing offenses ties in with the "take away the big play" mantra. The idea for Carroll then is that if you physically punish your opponent and hit them hard when they catch the ball, there's a better chance that you can dislodge the football, or even better, make the receiver tentative when going for the football in the first place. Apart from the actual hits, forcing opposing offenses to string together a series of 9, 10, 11 plays in any given drive increases the odds forcing a mistake or a punt.

No. 3 Get the ball — either strip the ball or make the interception when in position.

Carroll's teams spend extraordinary amounts of time, particularly for an NFL team, running basic drills. One focus is on drills that make the act of forcing and recovering fumbles second nature. I've seen this at Seahawks training camp sessions, instilling a second nature into players to strip and punch at the football.

The Seahawks forced 17 fumbles in 2013 (5th in NFL), intercepted 28 passes (1st in NFL) and were first in the NFL in takeaways as a defense.

It's tough to summarize any NFL defense in general terms, but the Seahawks' defense is certainly characterized by a three-deep look, typically either Cover-3 or Cover-1 (man-free).

In Seattle's Cover-3 or Cover-1 schemes, Earl Thomas is almost always patrolling the deep middle third of the field. On the sidelines, the corners play a mixture of press-man and press-bail. Sometimes both corners bail, sometimes one bails and one jams, and sometimes they both jam at the line.

Sometimes you see one corner playing in man-to-man and the other in a zone deep-third look. Sometimes both play thirds, and sometimes they both play man. Every once in a while, you'll see Richard Sherman playing man-to-man in the slot. They like to vary their coverages. What they don't do, though, is disguise their looks all that much.

The [Seahawks] line up, they play Cover-1, they play Cover-3; the thing that I'd guess Peyton will study is the matchups. I mean, there is a matchup differential just from Maxwell to Thurmond to Sherman, to obviously the safeties, who are very, very good, but they're different kind of guys.

The linebackers, you could find matchups there, but, it's not about coverage, it's not like he's going to be up there going, you know,

The only difference will be press-man bump and run vs. press-man bail. Really, that's what the [Seahawks] want to do - they want to bail, they want to give you flat routes all day, and just say hey, we dare you to have the patience to just dink and dunk it down the field."

Remember that part above about "out hitting your opponent"? This is where that principle comes in.

Underneath, the linebackers and Chancellor alternate between man and zone coverages, dropping into zones or following specific players. This all depends on the matchups.

Here's what a sample three-deep scheme with underneath zone drops would look like:

In this case above, Chancellor drops right into the passing lane, and Colin Kaepernick either doesn't see him, or thinks he can throw it over him. Chancellor intercepts it.

Here's another view of a similar look:

Of course, because the Seahawks are likely to play a lot of nickel (five defensive back) defense in the Super Bowl, to combat Denver's three-wide looks, I've drawn up a few very standard coverage looks. 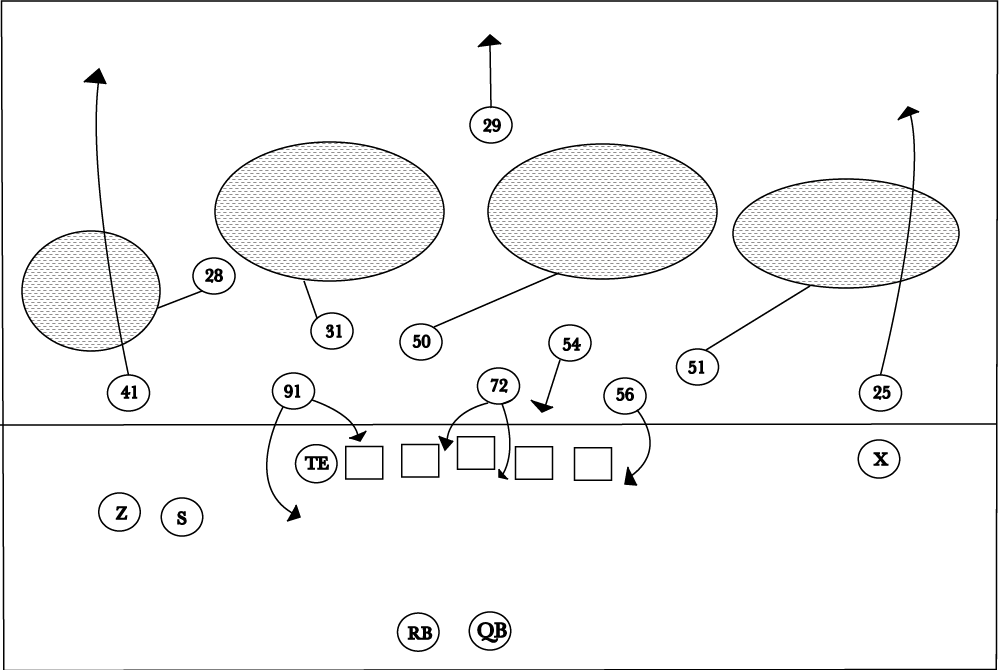 Again, this is a very general Cover-3, three deep, four under scheme I've drawn up.

Defensive line: In the illustration above, the Hawks have two defensive-end types rushing (No. 91 Chris Clemons and No. 56 Cliff Avril). Those players may go inside or outside the tackle/tight end to achieve pressure. Michael Bennett (No. 72) is aligned over the center ('nose tackle' ), and he'll look to slice through and pressure the quarterback.

Linebackers: I've shown a look here where MLB Bobby Wagner (No. 54) would come in on a blitz, perhaps stunting or drafting off of Bennett. In any case, K.J. Wright could come with pressure here as well and alternate coverage responsibilities with Wagner. There's flexibility. On the outside, you could see Bruce Irvin rush off the edge or stunt with Avril. Seattle has the athletes at the linebacker position to allow them to do both.

Safeties: Because Chancellor (No. 31) is almost a de facto linebacker, you'll most often see him in the box, stopping the run and taking away short crossing patterns. He can drop into coverage, run in man-to-man or blitz. Earl Thomas (No. 29) would take the seam or post route into his area. If there are two, he splits the difference between the two. 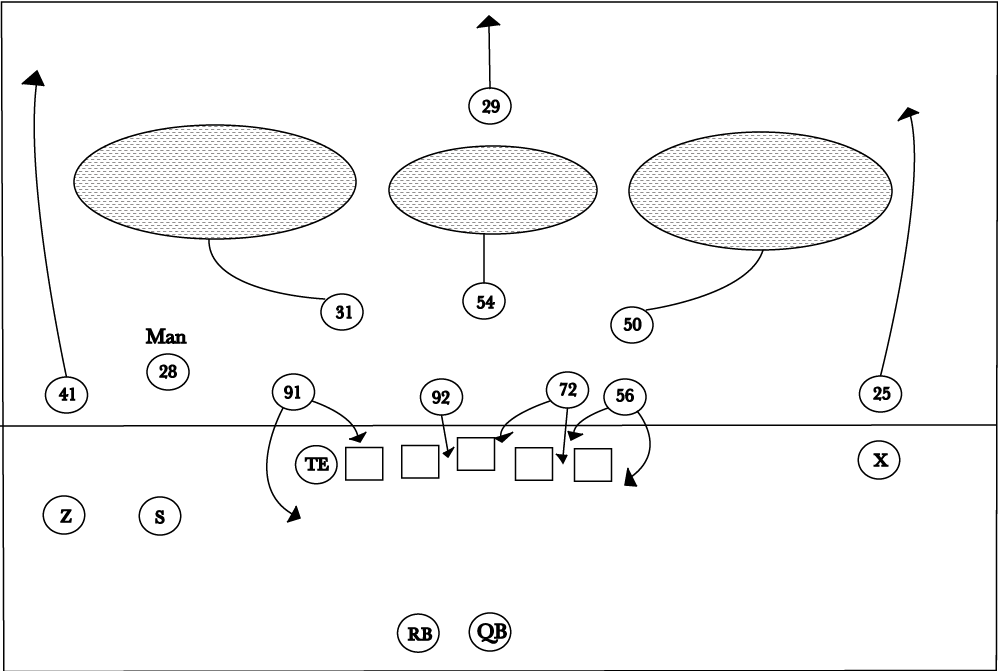 In this case, I've replaced Bruce Irvin with NT Brandon Mebane. This could also be Clinton McDonald. In the case above, Thurmond could be playing man on the slot receiver, with everyone else in zone. 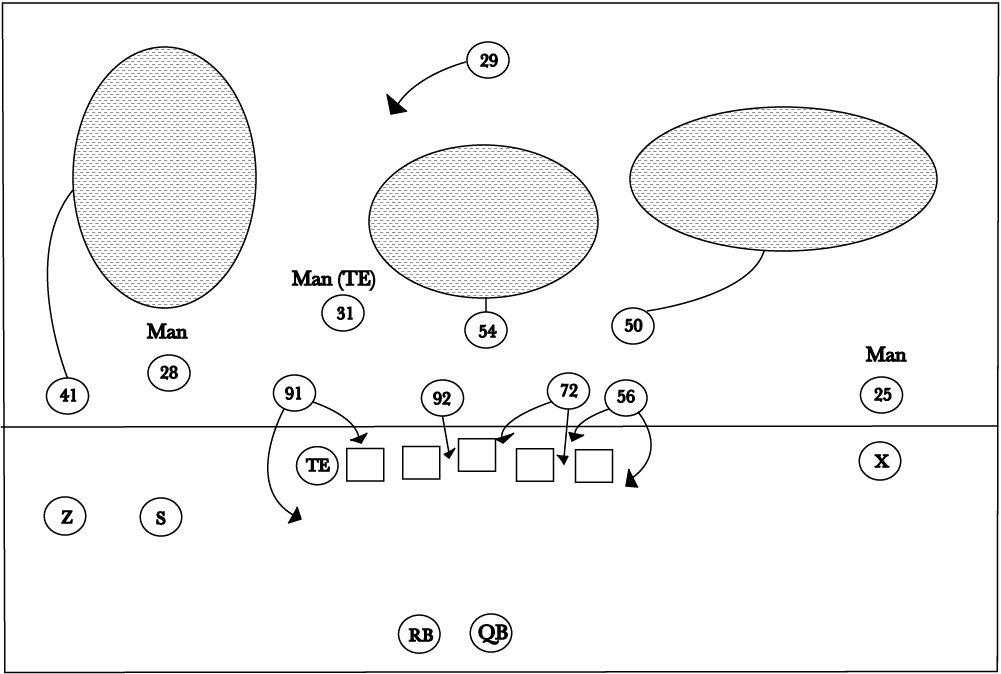 In this case, you see man on Sherman's side, zone on Maxwell's, nickel in man, and Chancellor lined up in man against Julius Thomas, for instance. This could easily be K.J. Wright switching with Chancellor, as well.

Ultimately, Earl Thomas is crux of this pass defense, because his range, play recognition, discipline, and anticipation allow Seattle to run their three-high shell so effectively. The Hawks feel comfortable leaving their cornerbacks in press on the outside, often in one-on-one situations, because Earl has the deep middle of the field on lockdown and he can assist deep if either corner gets beat.

Pete Carroll described the role of his free safety while still back at USC, and while there are surely myriad nuances, when you boil it down, this is what the Seahawks ask Thomas to do still, to this day:

In other words, Thomas must play from the numbers to the numbers (redline to redline), and take away any routes going to the middle of the field. If there are two, he splits the difference until the ball is thrown. Carroll expounds:

That's eight college-tries by opposing quarterbacks to Area 29 (the nickname given to the deep middle of the field), and that's out of 524 total attempted passes against the Seahawks in 2013. Thomas' ability to almost completely take away that part of the field is crucial to Pete Carroll's number one stated goal as a defense: Eliminate the explosive play.

This play below was from last season's Playoffs, but it does a great job of illustrating Earl's deep middle responsibility, in addition to his range to help his cornerbacks on the outside.

So, how have Carroll and his staff been able to develop such a talented and deep group of cornerbacks in a league where corner is one of the mostly highly valued positions? They've already lost their starting RCB in Brandon Browner for the season. After another corner, Walter Thurmond, went out with a suspension, a different guy stepped in to take his spot. They've also got a guy named Jeremy Lane that has played very well in spot duty in his two years with the team. They shut down fifth-round draft pick Tharold Simon before the year even started. They're deep.

It comes down to scouting/acquisition, and player development. Said Pete Carroll:

There's a couple aspects to [how we've managed to build a group of talented corners]. One, we want fast guys, and long guys, that's what we're looking for.

Then, they've been indoctrinated into the system.

This is what it really comes down to, in my opinion. Every single corner in the draft is fast. You narrow the group to some of the taller players, but from there, you have to develop those players and mold them into exactly what you want them to be. You have to hone their skills, craft their styles to fit your scheme, and work on it every day. Carroll is a former DB and his area of expertise is defensive back play. I genuinely believe he's the best defensive backs coach in the NFL and that there's no better teacher in this area.

Kris Richard and Rocky Seto [defensive backs coach & defensive passing game coordinator] have done a fantastic job of training them. They're really, really, strict, and if you guys could appreciate it, they (the corners) all look the same, somewhat.

This is a long, long process, to get these guys to where they are. But, now they're in the system, and it doesn't matter who steps in and plays. It's impressive.

So, it's a process, but it's kind of a systems thing for us.

This is something that's resonated with me. Despite what you'd think about NFL-level coaching, there are varying degrees of emphasis put on player development and teaching. It always stands out to me how hands-on all of Seattle's positional coaches are with their players, how specific they are, and how repetitive they are.

Another big part of the puzzle is that Seattle's defensive backs are noted to be extremely dedicated to tape study and being students of the game.

At the end of the day, Seattle's cornerback depth is strong because they've been able to mesh good coaching with a specific and well-developed scheme. Obviously, Carroll and John Schneider have done a great job of finding talent. But Carroll's focus on the little things — indoctrinating his players into the system he's been running for decades — plays a big part of it.

Repetition, muscle memory, the confidence factor ... these all play a part in the reason this front office has been able to turn mid- to late-round picks and CFL cast-offs into All-Pro players.

This Sunday, when you're watching Super Bowl XLVIII, pay close attention to the techniques Seattle cornerbacks use: hand placement, footwork, etc. Watch their eyes, how they respond to different formations. It's all highly managed, meticulously taught, deliberately schemed technique.

Seattle sets themselves apart because they're elite at taking their core, proprietary concepts — i.e., the way they want to do things schematically — and applying them to the field through their players, particularly in the defensive secondary.

• Bed, breakfast and beyond: The AirBnB guide to Super Bowl tourism