How to host the ultimate Super Bowl party

Warning, if you're not a REAL NFL fan you probably shouldn't read this.

Share All sharing options for: How to host the ultimate Super Bowl party

We must remind you that this is PARODY. Whatever useful party tips you find here are merely the product of your own resourcefulness. All spelling errors are intentional (we think). Sorry, not sorry. -Ed.

Superbowl Sunday is here folks. This is my Superbowl, Springbreak, and Summervacation all rolled in to one awesome day. Its the best time of the year, so dont be a idiot when it comes to planning the Big Party during the Big Game. Follow my tips and tricks to make sure that you not only survive, but also are the King of your Superbowl party. Lets get started:

My main man Spilly has got you covered with a amazing menu for this years Superbowl that is a absolute must-read for all foodies. But any Superbowl menu is incomplete without Queso.

This is sure to be a real crowd-"cheeser" (Cheese). Everyone loves queso and this year I modified my recipe to give a nod to both the Denver Broncos and the Seattle Seahawks. Those are the two teams playing in the game. To get started I used the base of any good cheese dip: 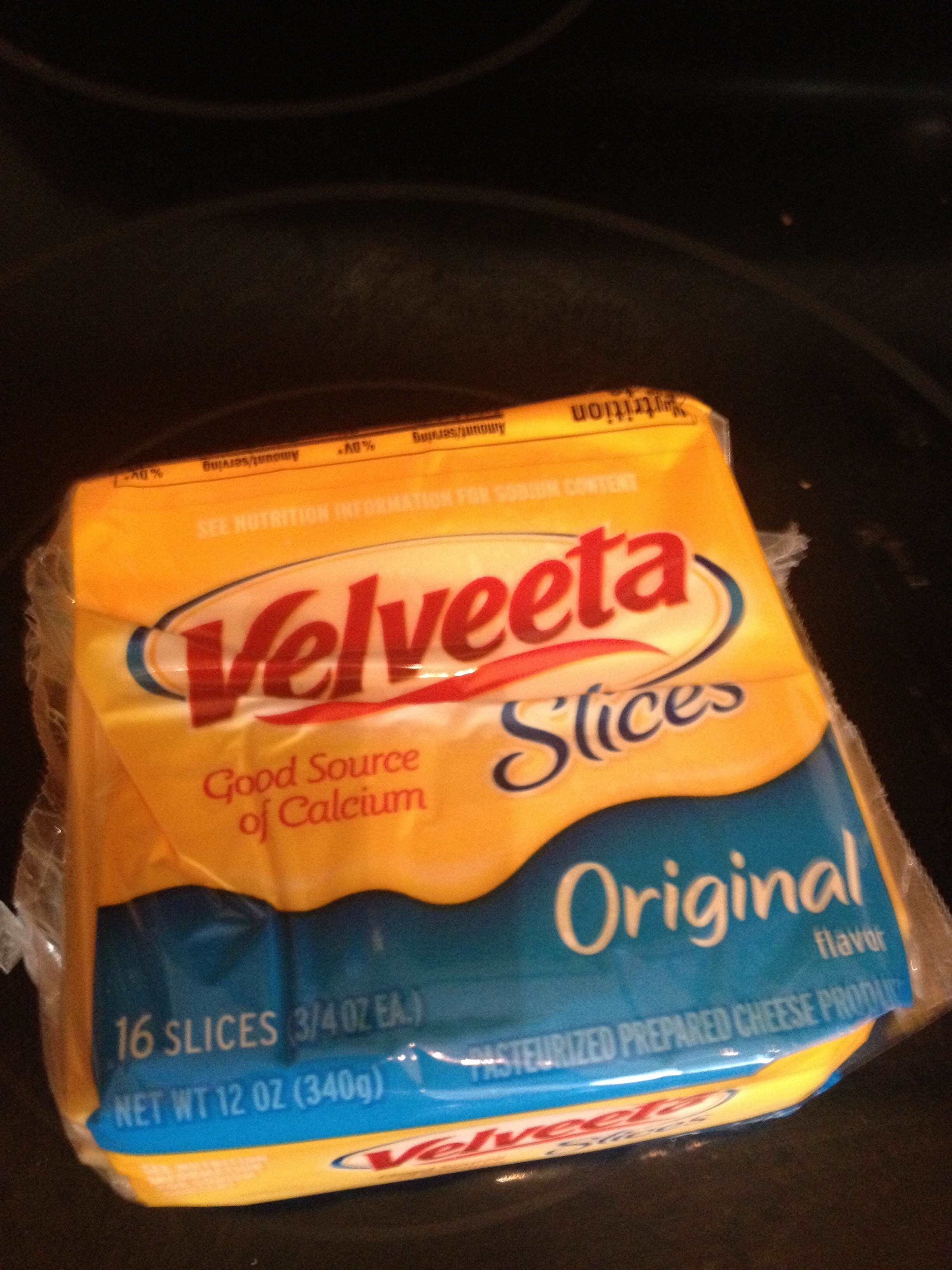 Like most sports fans I stocked up when Velveeta announced they had a shortage. I use it on everything, its the closest you can get to stadium cheese without boiling the honeybees yourself.

Now I told you Im adding Denver ingredient, in this case its a nod to Mark Schlereths stinkin good green chili sauce. It also happens to be my favorite and most versitile ingredient- its like the Julian Edelman of fortified wines. 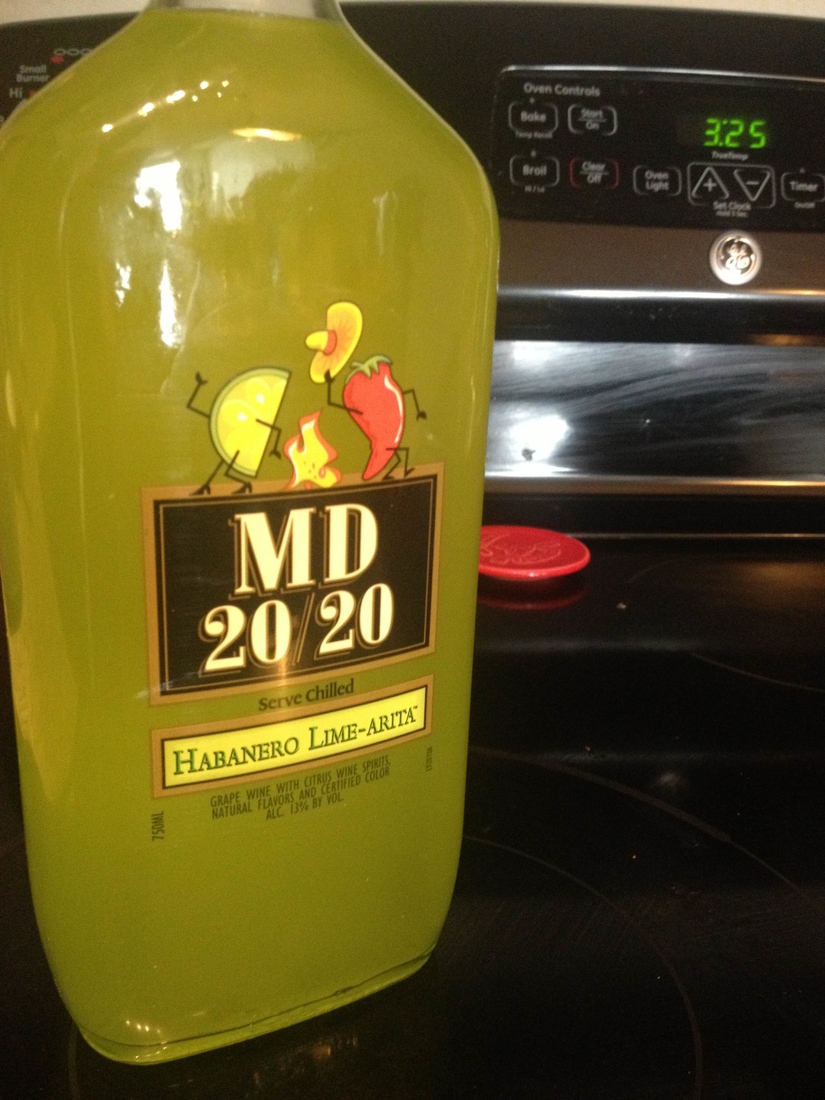 And now we need to add something in for the Seadderal Pharmacyhawks.In a nod to there entire defensive backfield I wanted 2 include some sort of illeagal stimulant. You all know Im a fan of preworkout mixes: 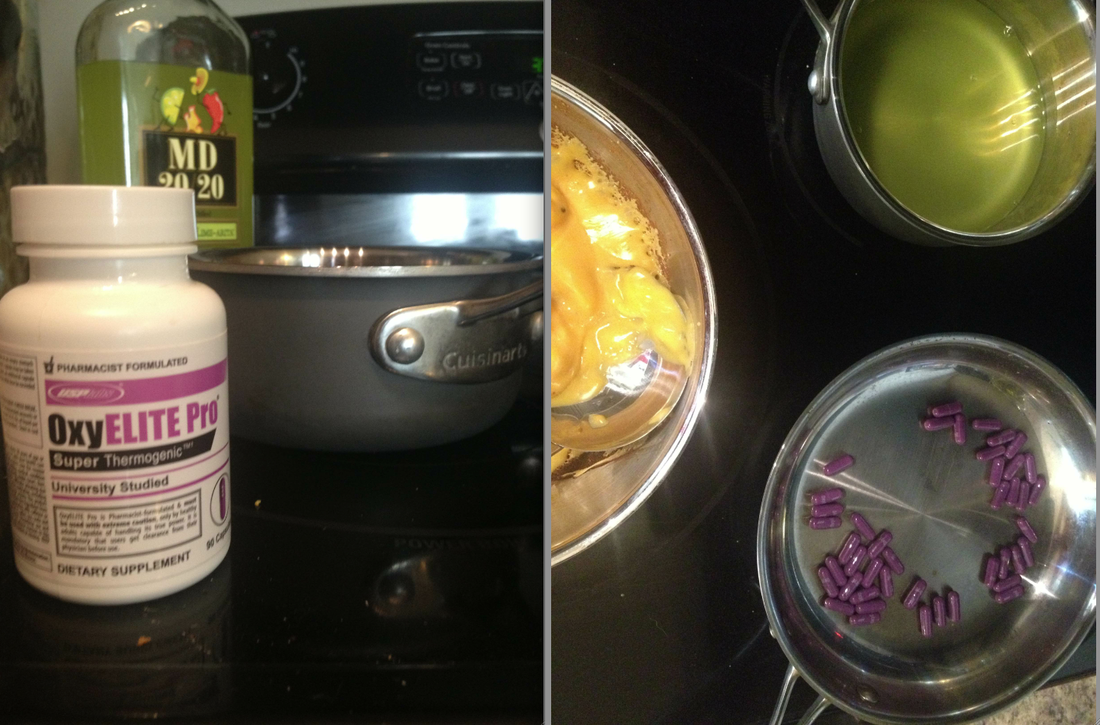 I chose OxyElite Pro because its a stimulant thats illeagal to use in the NFL and as a matter a fact it cant even be legally sold in any developed country anymore. While researching this recipe I also found out that a bunch of entitled me-first OxyElite Pro users had it recalled a couple months ago because people were going into spotaneous liver failure and getting hepititis from it. This country use to be tough, you know.

More from the menu

More from the menu

Including a preworkout formula is day 1 stuff you learn at PFTC-U= you need something to pin your guests ears back.On Thanksgiving I used the old formula of Jack3d but this time Im using its fatburning Elite cousin OxYElitePro. This particular health supplement has killed a handful of people in the last 5 yearst but its the Superbowl, if Im going to have a heart attack anyways (and the stats say you defnitely are) I want it to be during the Big Game. I find that when you toast your OxyElitePro it brings out better flavor.

When your done melting the queso and mixing in your Dimethalyine 3,1 powder and Mad Dog its time to smoke it to really get some good flavor in. Lots of people will argue over the best smoking material: is it Cherry? Pecan? Hickory? Mesquite? Well your all wrong. Its the Superbowl and you need something that will pack a bit more of a punch: 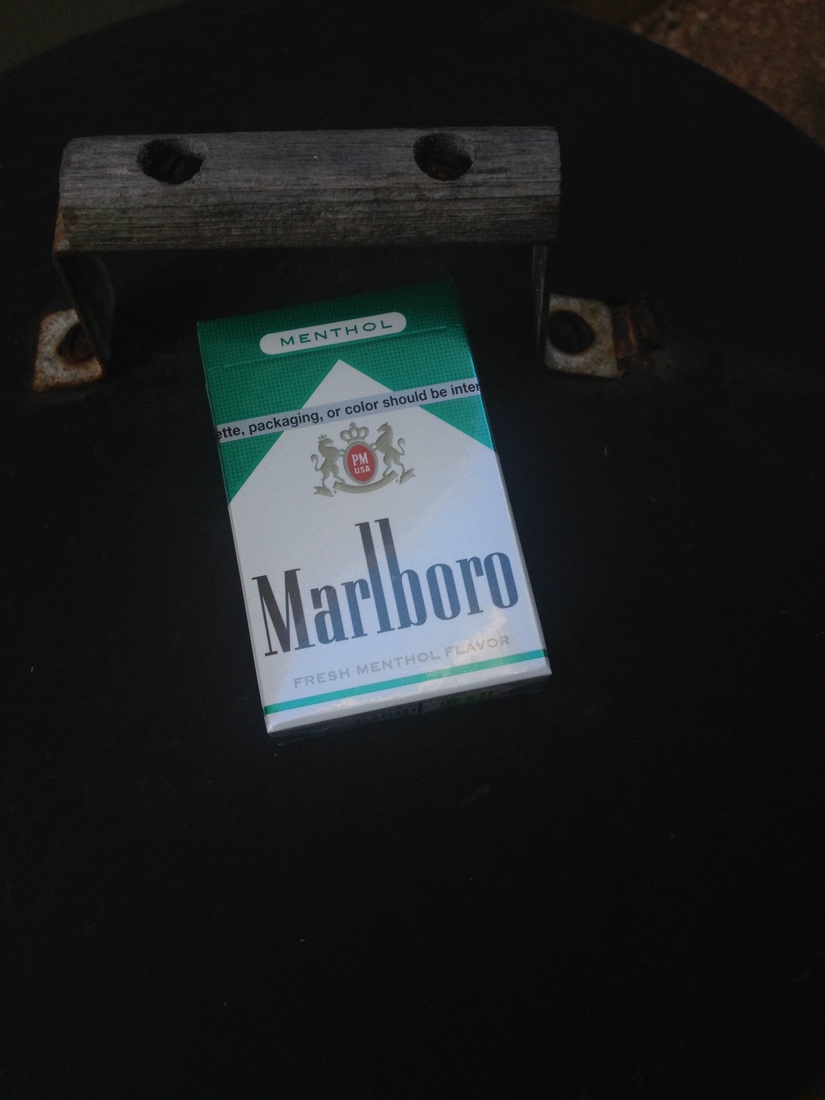 Cigarettes. They dont call it smoked queso for nothin folks. Superbowl QBs use to smoke cigarette all the time during games so why cant you enjoy some of the flavor in your dip? I dumped a entire pack of these bad boys into my smoker and soaked em in lighter fluid= Its the Superbowl. I Put my pot of queso on there and smoked it to perfection. 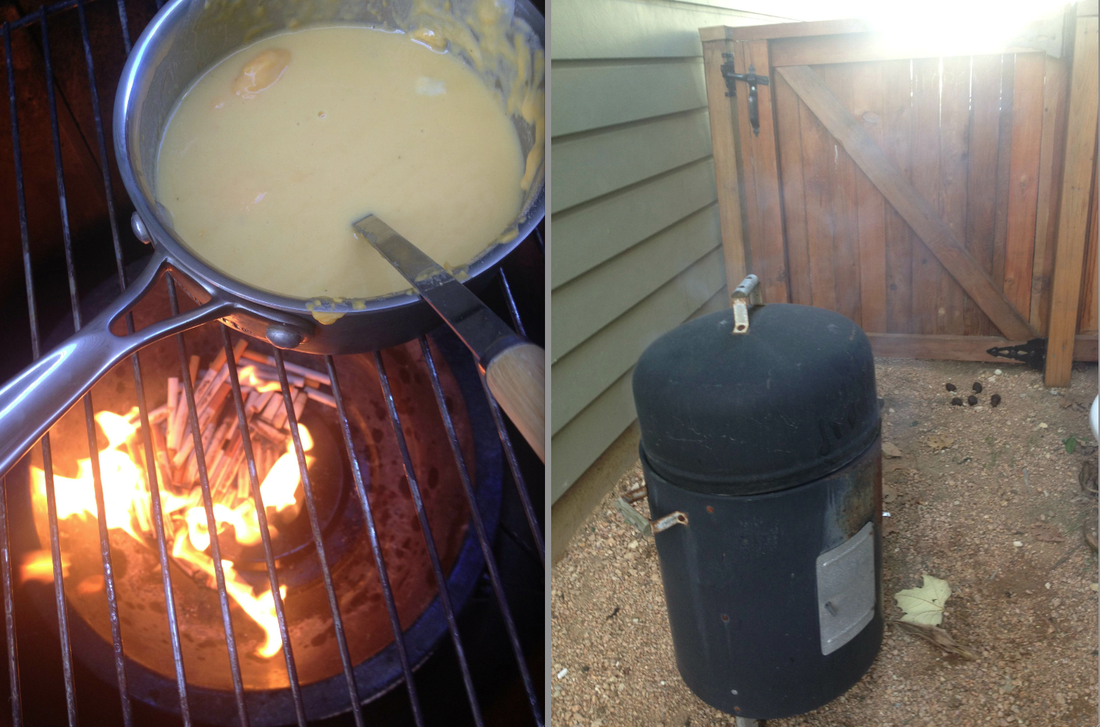 Let that smoke for a good 15 minutes to get the aroma infused into the queso. You're neighbors will thank you for the wonderful BBQ smell. When complete your queso should of taken on a bit of the grayish color as well. 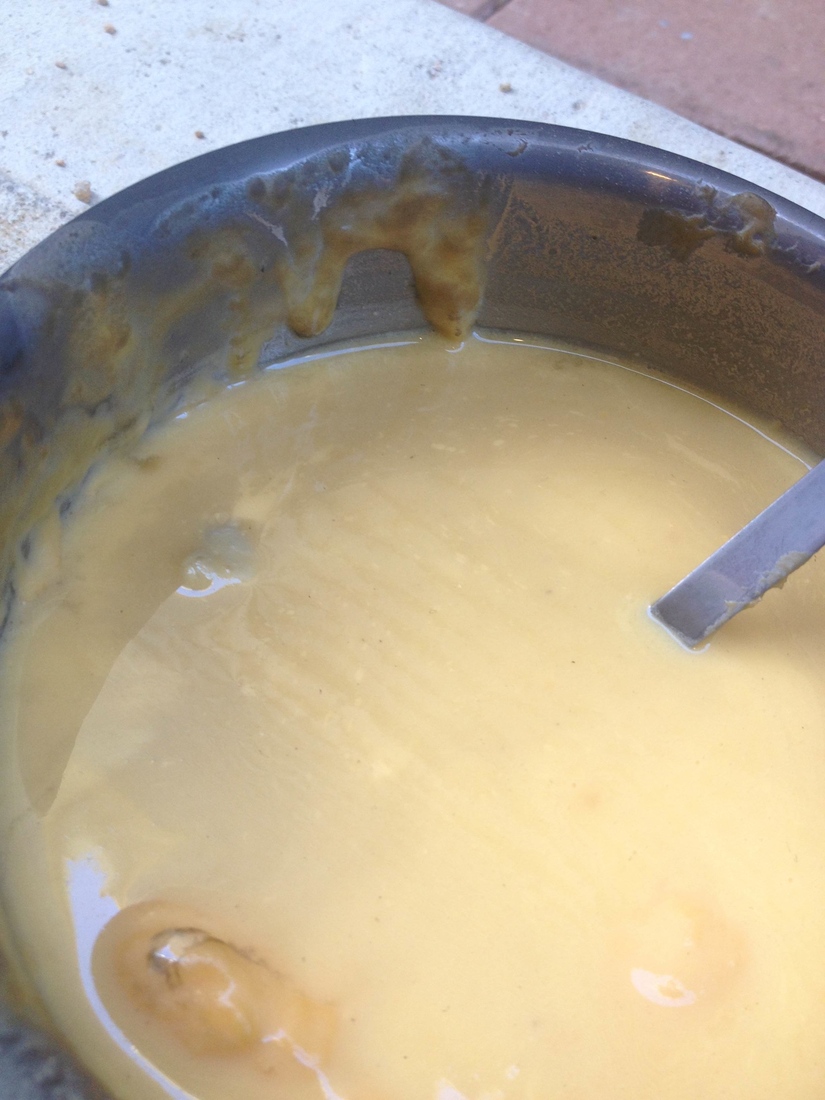 Oh Queso (Ok, so) whats the next thing on you're list?

You will also need a Stripper 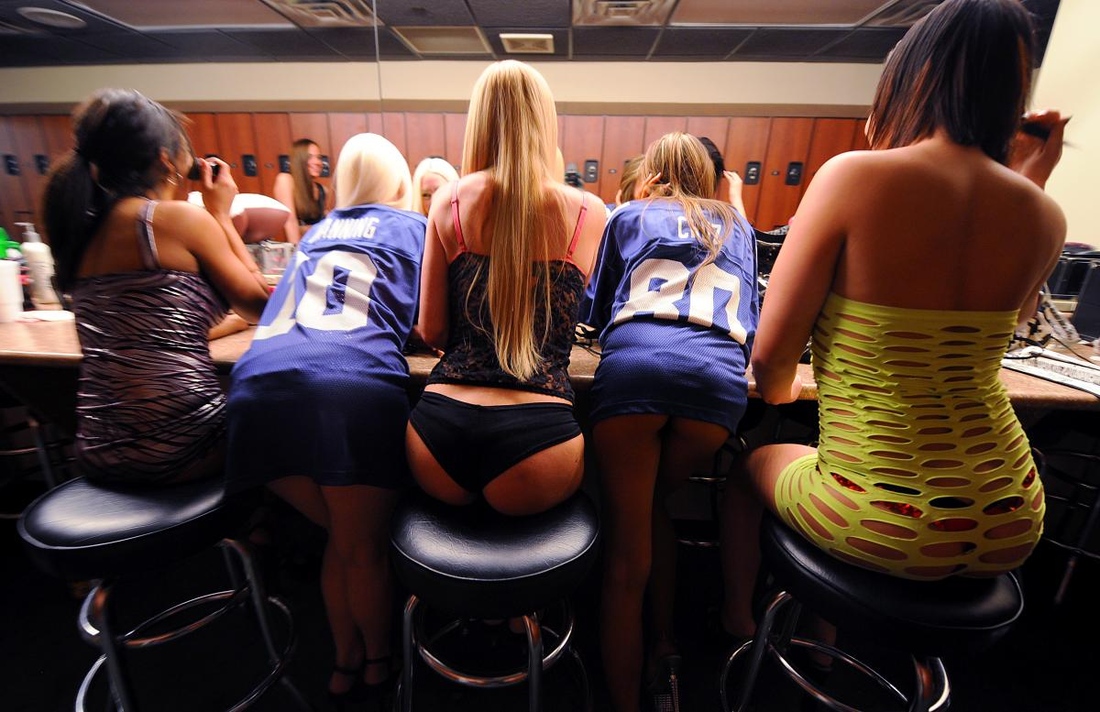 Just to make sure Im staying on the right side of that fine line I like to have some female entertainment during the game.

Nothing gets my sexual apetite going faster then watching the NFL folks. When Im watching Football I like a naked chick to remind me that I olny like watching football for when athletic male bodys hurt each other. Violencing someone is the farthest thing away from sex you can possibly do,, so just because Im admiring a males body Im still being super masculine on account of there doing the exact opposite of having sex with each other. It makes sense to me when I think about it that way I hope you agree.

Make sure you tell your guests before the game to bring plenty of single dollar bills for playing that grid game where you bet on the scores. Then when they show up instead of some stupid little game, they'll have money to tip the strippers with (unlike Richard Sherman who admitted he doesnt tip strippers this week). If any of your guests or there kids complain about you lying to them and having naked boobs instead of playing the score-gambling game then you can use my patented line: "Sounds like YOUR the only Superbowl Square I see,, theres the door no one will miss you."

You will also need a Big-Screen Television:

For The Big Game you need a Big Screen or else you end up coming across like a second rate fan. I do most of my shopping at Sears theyll pretty much order anything for you they'll take whatever business they can get at this point so I cruised there websight looking for a TV thats sure to make my Superbowl party a SuperHit.

A $40,000 TV should be enough to get you laid I dont care how little you know about NFL rules or facts and statistics. You could call Russell Wilson "Elite" and no one would even care how dumb you are because EVERYONE looks Elite when your watching on a TV that costs more then Mike Vicks urologist bill.

The TV wont only make the game more like your there and part of the real action, but it will also be a great venue for you to pull a Pete Carroll screen "Loose Change" at halvetime and educate your guests onto what really happened on 9/11.

Im hosting my Superbowl party in North New Jesey this year to be close to the real action so I wanted to doublecheck that I could get the TV so I livechatted with Sears for you: 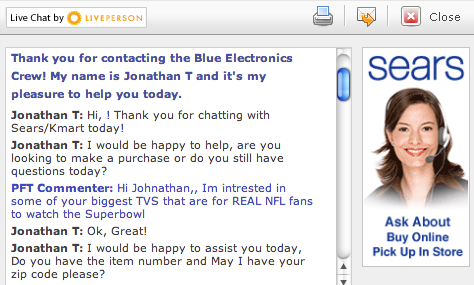 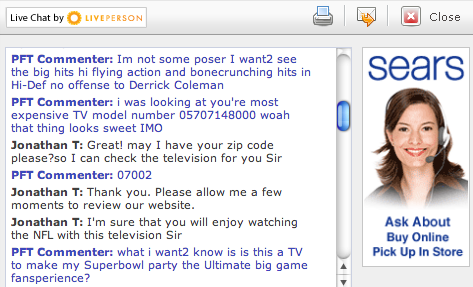 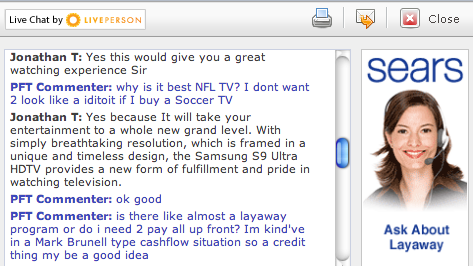 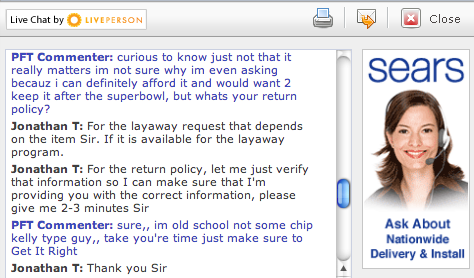 There you have it,, TV sold. What a bunch of idiots no offense to Sears.

Well thats it for my advice- the only thing thats left is for you to go out there pin you're ears back and execute. I hope this has been as informative for you as it has been for me,, godbless you all and enjoy your Superbowl SAFELY folks.